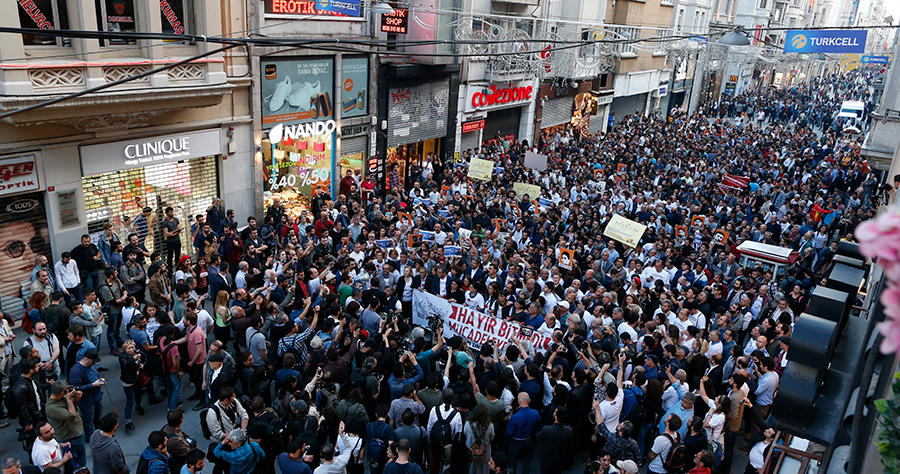 Demonstrators gather during a protest to mark the anniversary of the nationwide summer 2013 Gezi Park protests, in Istanbul, Wednesday, May 31, 2017. (AP Photo / Lefteris Pitarakis)

On Turkey’s Indictment of 16 Individuals from Gezi Park Protests

As delivered by Acting Deputy Chief of Mission Gregory Macris
to the Permanent Council, Vienna
February 28, 2019

In Turkey, a succession of emergency decrees, restrictive constitutional amendments and vague interpretations, and broad application of counterterrorism laws have combined to severely undermine the rule of law. More than 50,000 citizens — including hundreds of journalists, writers, editors, publishers, translators, rights activists, lawyers, students, and elected officials — are being held on grounds that appear to be politically-motivated. No one should be punished by the government for exercising fundamental freedoms guaranteed by a nation’s constitution.

We are deeply concerned by the government’s continued targeting of individuals whose views differ from those of the government. In this regard, we are troubled by reports that prosecutors in Turkey moved recently to indict 16 civil society, media, and business leaders in connection with the 2013 Gezi Park protests. Exercising one’s right to freedom of expression and peaceful assembly should not result in criminal charges. The ability of individuals to exercise freedom of expression, peaceful assembly, and association is fundamental to any healthy democracy. We urge Turkey to act in accordance with its OSCE commitments and obligations under international law, to respect these freedoms, and to release all those held for exercising their human rights.