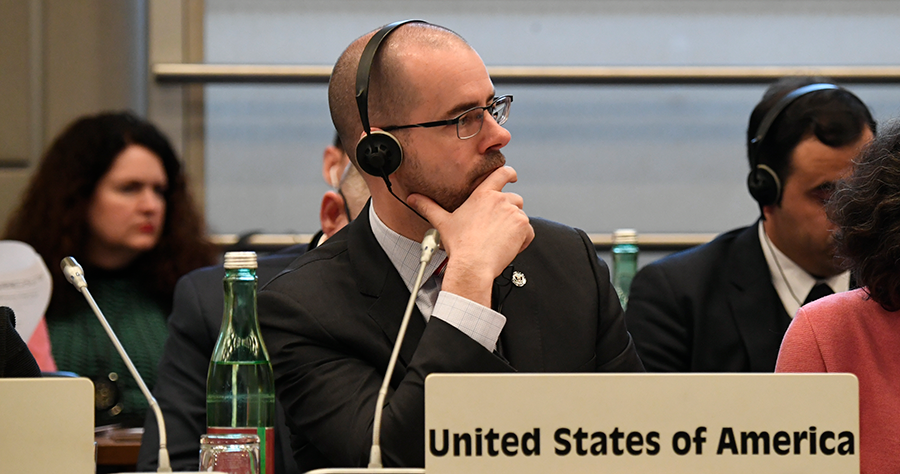 The U.S. State Department's Special Advisor for Religious Minorities in the Near East and South/Central Asia, Knox Thames, listens to opening remarks at the April 1, 2019 Supplementary Human Dimension Implementation Meeting in Vienna, Austria.

Statement as prepared for delivery by Special Advisor for Religious Minorities in the Near East and South/Central Asia, Knox Thames
to the OSCE Supplementary Human Dimension Meeting (SHDM)
Vienna, Austria
April 1, 2019

Promoting the fundamental freedom of religion or belief, including protecting the human rights of members of religious minorities, is a foundational tenet of the United States. These commitments are reflected in our Constitution and was an emphasis from the first days of our republic. President George Washington famously wrote to the Touro Synagogue in 1790: “For happily the Government of the United States gives to bigotry no sanction, to persecution no assistance.”
In the ensuing years, while we continued our work at home to perfect our union, promoting religious freedom for all and defending the human rights of persons belonging to religious minorities became a unique part of U.S. diplomacy. Our efforts to promote these fundamental freedoms are built on our fidelity to international standards, such as Article 18 of the Universal Declaration of Human Rights, Helsinki Final Act Principle VII, and other OSCE commitments.

The OSCE has strong commitments and programs on the inter-related and inter-dependent issues of religious freedom and tolerance and non-discrimination. Regarding religious freedom, OSCE commitments provide some of the most sophisticated standards at the international level, and the OSCE is the only regional body with a specific panel of experts devoted solely to religious freedom. And the efforts of the OSCE and its Office for Democratic Institutions and Human Rights (ODIHR) on FoRB and tolerance and non-discrimination have been trail-blazing. Since 2004, ODIHR has developed a collection of resources and programs that raise awareness about discrimination, hate crimes, anti-Semitism and other forms of intolerance, including against Muslims, Christians and members of other religious groups, as well as supports three special representatives on these topics. For instance recognizing how specific challenges require tailored approaches, the United States has welcomed the “Turning Words into Action to Address Anti-Semitism” (WIA) project to strengthen the capacity of OSCE participating States and civil society to prevent and respond to the unique challenge of anti-Semitism.

Unfortunately, we are far from the ideals recognized in Helsinki and carried forward to today. The Pew Forum reports that 83 percent of the global community live in religiously restricted environments, an all-time high. Some of those places can be found here in the OSCE region, with some governments systematically discriminating against certain religious groups through unduly burdensome religious organization registration laws, restrictive religious practices, and the banning religious groups under the pretext of “extremism.”

In Russia, for instance, the government continues to target members of “nontraditional” religious minorities, cloaking its restrictive laws and legal rulings in the trappings of combating vaguely-defined “extremism.” Russian law enforcement agencies have escalated raids, fines, detentions, arrests, criminal prosecutions and imprisonment of Jehovah’s Witnesses. Most notably, in clear contravention of OSCE commitments, since banning the Jehovah’s Witnesses outright as a supposed “extremist organization” in 2017, authorities have launched criminal cases against over 100 JWs for practicing their faith — over half of them are currently in jail or under house arrest.

Specifically, we condemn the February conviction of Dennis Christensen, a Danish member of the Jehovah’s Witnesses, who was sentenced to six years in prison for “organizing the activity of an extremist organization” in retaliation for his peaceful religious practice. We also remain gravely concerned about the multiple credible February reports of torture of Jehovah’s Witnesses in the city of Surgut. Other members of peaceful religious groups, including some Muslims, have similarly been wrongfully targeted under this overly broad law on “extremism.” Russia is also responsible for abuses in occupied Crimea, which have steadily increased over the last year. Russian occupation authorities continue to arrest, prosecute, imprison, and, in some cases, torture Crimean Tatar Muslims in retaliation for their opposition to the occupation.  In the latest example of abuse, Russian occupation authorities raided homes and detained over 20 Crimean Tatars on March 25-26.  In eastern Ukraine, Russian-led forces are responsible for abuses in the areas they control, which has included raids and violence targeting Baptists, Pentecostals, Charismatics, Seventh Day Adventists, and Jehovah’s Witnesses, as well as members of other religious groups.

Turkmenistan and Tajikistan also maintain troubling laws and policies contradicting their OSCE commitments, and Secretary Pompeo has designated them as “countries of particular concern” for their severe religious freedom violations. In both Turkmenistan and Tajikistan, Jehovah’s Witnesses are jailed because of their religious activities or because of their conscientious objection to military service. With both countries, the United States has offered to engage in a process about needed reforms which could lead our delisting them as countries of particular concern. The United States repeats this offer today.

Elsewhere in Central Asia, we have welcomed real reforms in Uzbekistan, which resulted in Secretary Pompeo’s lifting the “country of particular concern” designation last year. The Government of Uzbekistan wisely engaged with the UN Special Rapporteur on Freedom of Religion or Belief and entered a robust dialogue with the United States. They registered religious groups, released prisoners, and developed an impressive roadmap for reforms. We look forward to seeing the roadmap fully implemented this year and to the Government of Uzbekistan inviting the OSCE Panel of Experts to assist in that process.

And across the OSCE region, Jewish individuals, their places of worship and their property continue to be targets of anti-Semitic violence and destruction. Many Jewish communities fear for their safety. Too many governments proclaim policies of “zero tolerance” but fail to call out and condemn anti-Semitism when it arises. Today, there is clear need for governments to identify, monitor, and combat anti-Semitism in all of its ugly forms, both traditional and contemporary. No OSCE participating State can be complacent. Last October, in the deadliest anti-Semitic attack in U.S. history, a gunman killed 11 Jews as they gathered for services at a synagogue in Pittsburgh. The United States rigorously prosecutes anti-Semitic and other hate crimes. And while far from our region, the tragedy in New Zealand where innocent Muslims were killed during Friday worship at two mosques was horrific and reminds us of how hatred knows no geographic boundaries.

In the face of discrimination, undue restrictions and repression around the world, we can and must do more to protect every individual’s inalienable right to exercise religious freedom. We also need to promote interfaith tolerance and understanding. And we need to defend the human rights of members of religious minorities. To act effectively against anti-Semitism, anti-Muslim discrimination, and other forms of discriminations, and to confront bias-motivated violence, it is essential for everyone – in government at all levels, in law enforcement, educators and religious leaders – to speak out and act. In our own country, we collect data disaggregated as to motive on hate crimes to so that our decision-makers are better able to formulate effective responses. We provide those statistics to ODIHR’s Hate Crimes Unit and urge all OSCE states to do the same.

In this effort, we are most effective when like-minded governments and communities work together to protect religious freedom. We appreciate the Slovak Chairmanship naming this important topic as their first Supplemental Human Dimension Meeting, and hosting a Conference on Combating anti-Semitism in the OSCE region in February.

It is also why Secretary Pompeo brought together representatives of governments, religious communities, civil society groups, and international organizations from around the world to discuss these issues at the first ever Ministerial to Advance Religious Freedom last July.
At the Ministerial, we hosted representatives from 84 governments at the Department of State including the previous Chair-in-Office and ODIHR Director Gísladóttir, as well as the European Union, Organization of American States, and United Nations. Recognizing the importance of including members of civil society and religious communities, over 400 NGOs and religious figures attended. Everyone came with the joint goal of finding ways that governments and civil society can work together to protect religious freedom around the world. We also made sure that both Director Gísladóttir and Rabbi Andrew Baker as the Chair-in-Office’s Personal Representative on Combatting Anti-Semitism spoke about their important work.

At the conclusion of the Ministerial, the Secretary released the Potomac Declaration and Plan of Action. The Potomac Declaration reflects the importance of promoting religious freedom as a universal human right and defending religious minorities to help ensure greater peace and stability within and among nations. The Potomac Plan of Action provides the roadmap for meeting that goal, outlining a comprehensive framework of activities to promote religious freedom and to respond to the targeted repression of individuals on account of religion, belief, or non-belief.

As our work is not done and such repression persists, Secretary Pompeo announced he will convene the second Ministerial in Washington on July 16-18.

In this effort, the United States cannot do this alone, and we appreciate the partnership with OSCE institutions and participating States on these topics. We are also encouraging other countries to convene regional follow up meetings to the Ministerial. In addition, I recently visited the United Arab Emirates, which held the first such meeting focusing on how to teach interfaith tolerance to combat violent extremism. With intolerance increasing in every society, it is critical we find ways to inculcate in youth an appreciation for religious diversity, pluralism and the rights of persons belonging to religious minorities. The OSCE Toledo Guiding Principles on Teaching about Religions and Beliefs in Public Schools, approved by participating States in 2007, was repeatedly highlighted. The unprecedented meeting helped jumpstart a new conversation about how to promote these values, which we will continue this summer in Washington at the Second Ministerial to Advance Religious Freedom. And more recently, Taiwan held a regional meeting on training religious freedom advocates from Southeast and East Asia. Further Ministerial follow up conferences will be held in Morocco, potentially Mongolia and Albania, as well as at the United Nations hosted by Poland.
In closing, the challenges facing members of religious minorities are great. However, they will not recede if we are silent or inactive. Promoting interfaith understanding and tolerance is critical for reaching full respect for freedom of religion or belief. In this effort, the United States remains committed to working in partnership with like-minded OSCE participating States, ODIHR, the invaluable Rabbi Baker and his fellow Tolerance Representatives, the private sector, faith communities, and civil society across the region. We do this to confront the dangers of anti-Semitism and other forms of hate, as well as to find new ways to advance religious freedom for all.