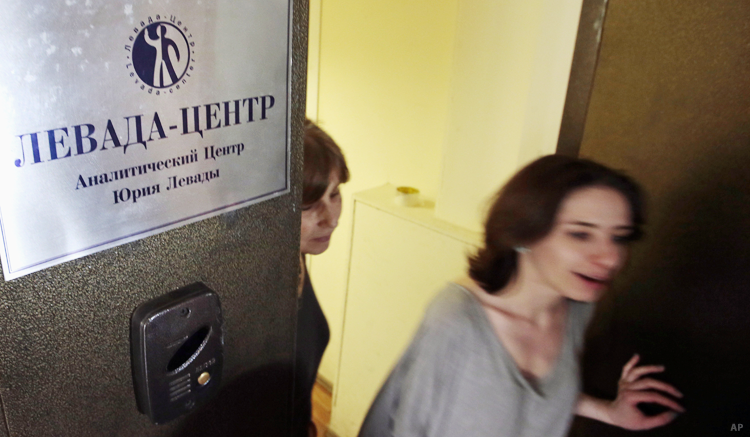 Levada Center employees leaving their office with the sign "in Moscow, Russia, in 2013. (AP)

Colleagues, twenty years ago in Copenhagen, our governments committed to “ensure that individuals are permitted to exercise the right to association, including the right to form, join, and participate effectively in non-governmental organizations which seek the promotion and protection of human rights and fundamental freedoms, including trade unions and human rights monitoring groups.”

Mindful of our shared commitments to human rights and fundamental freedoms, the United States is deeply troubled by the Russian government’s decision to designate the Levada Center as a so-called “foreign agent.”  The Levada Center is an internationally respected public opinion and polling organization known for the rigor and quality of its work.  Polling is an important tool in any country that seeks to live by democratic standards of openness, accountability in government, and freedom of scientific inquiry.  These are principles Russia should seek to promote, we believe, and not repress.  Restricting the work of the Levada Center could only serve to diminish domestic and international understanding of Russia and the Russian people.  Russia’s actions regarding Levada are particularly troubling coming just before the Russian Duma elections that will be held on September 18.

The Russian Government has designated 141 organizations as so-called “foreign agents.”  It has targeted non-governmental and business associations working to protect the environment, fight the spread of HIV, and promote transparency, good governance, and freedom of expression. These organizations are essential for Russians to achieve transparent and accountable governance, equal treatment under the law, and to ensure the ability to exercise their rights without fear of retribution.

We also note with concern the Russian Justice Ministry’s September 5 surprise inspection of Memorial, one of Russia’s oldest and most respected civil society groups working to preserve the memory of political persecution under the Soviet Union.  This inspection is part of Russia’s continued and systematic harassment and persecution of Memorial through the foreign agents law.  The Russian Government has routinely targeted Memorial’s leaders and designated six of Memorial affiliates as so-called “foreign agents.”

Russia’s foreign agents law raises serious concerns about Russia’s respect for its OSCE commitments and its obligation to respect the right to freedom of association.  We again urge the Russian government to reconsider this law and engage in genuine dialogue with NGOs and their supporters.