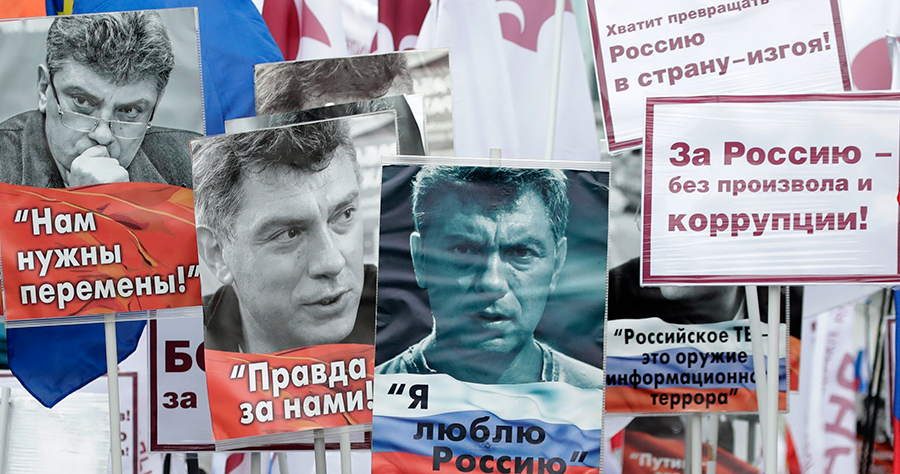 Five years ago today, former Russian Deputy Prime Minister Boris Nemtsov, a leading figure in Russia’s democratic movement, was gunned down in the heart of Moscow. Although five men were convicted for this assassination, to this day, the Russian authorities have failed to identify who organized and ordered the crime or hold them accountable.

Last week, OSCE Parliamentary Assembly Special Rapporteur Margareta Cederfelt issued her report on the investigation into Mr. Nemtsov’s murder. Ms Cederfelt’s comprehensive report highlights serious flaws in the Russian investigation, including allegations that “a political motive and the involvement of high-ranking officials were purposefully excluded” by the government, leaving the world with “no answers as to who ordered the assassination of Boris Nemtsov and why.” Ms Cederfelt’s report notes that Nemtsov’s death “had a strong impact on the political climate, spreading fear and possibly opening up for further attacks and repression” against opposition politicians, journalists, civil society activists, and human rights defenders in Russia. It is time for Russia to conduct a truly independent and credible investigation of Nemtsov’s murder, a goal all participating States’ delegations who read this report should support.

Boris Nemtsov remains an inspiration to all those in Russia and around the world who strive for justice, democracy, and a government accountable to the people. We honor his memory by renewing our call for the government of Russia to end impunity for violence against those expressing dissent and members of minorities, including those belonging to religious groups.

Mr. Chair, the United States is deeply concerned about numerous steps taken by Russian authorities in recent weeks that further worsen the environment for freedom of religion or belief.

In just the past few weeks, Russian courts have sentenced several Muslims to lengthy prison terms on terrorism charges unconnected to any threat or act of violence and have largely relied on so-called “confessions” reportedly coerced through torture. Ten men in Kazan were sentenced on February 5 to 11-22 years in prison. The following week in Yekaterinburg, three others were sentenced to 13-23 years in prison. Beyond coerced so-called “confessions,” the individuals are charged for the content of their social media posts, their gatherings to discuss religious topics, and their possession of religious literature – again, with no allegation by the state that any of this was connected to any threat or act of terrorism. In most of these cases, the government relied on dubious “expert” analysis and anonymous “secret witnesses” who were unavailable to the defense.

Unwarranted abuse continues against the peaceful community of Jehovah’s Witnesses who have been labeled a supposed “extremist” organization for the peaceful exercise of religious freedom. The United States and many others in this body have called attention numerous times to concerns about unjust police raids, arbitrary arrests and detentions, and intimidation against Jehovah’s Witnesses. On February 10, law enforcement officers conducted coordinated raids and mass searches of over 40 homes of suspected Jehovah’s Witnesses in the city of Chita and the surrounding region.

A number of people were detained, including Vadim Kutsenkowho has made credible allegations that he was taken by police to a forest where he was beaten and tortured by electric shocks. On February 6, five Jehovah’s Witnesses who are already serving two-and-a-half to three-year sentences for criminal “extremism” were severely beaten and then denied medical care upon arrival at penal colony number 1 in Orenburg.

Mr Chair, civil society organizations report that Russian authorities have carried out at least 780 raids of houses owned by Jehovah’s Witnesses in dozens of Russian cities since 2017, with more than half of those raids conducted in 2019. Over 200 Jehovah’s Witnesses are still facing “extremism” charges; those already convicted face up to seven-year prison terms. On February 7, Russia’s financial monitoring service placed over 200 Witnesses on its list of “extremists and terrorists,” cutting them off from the country’s banking system. This is shameful.

We call on Russia to urgently and thoroughly investigate allegations of torture by its authorities and to provide legal remedies to victims. We further call upon Russia to cease misusing its purported anti-terrorism and so-called “anti-extremism” legislation to target peaceful members of religious and ethnic groups. We urge Russia to immediately release all prisoners held for exercising their human rights, including the right to freedom of religion or belief, a right set forth in the Russian constitution, international law, and finally, the Helsinki Final Act.