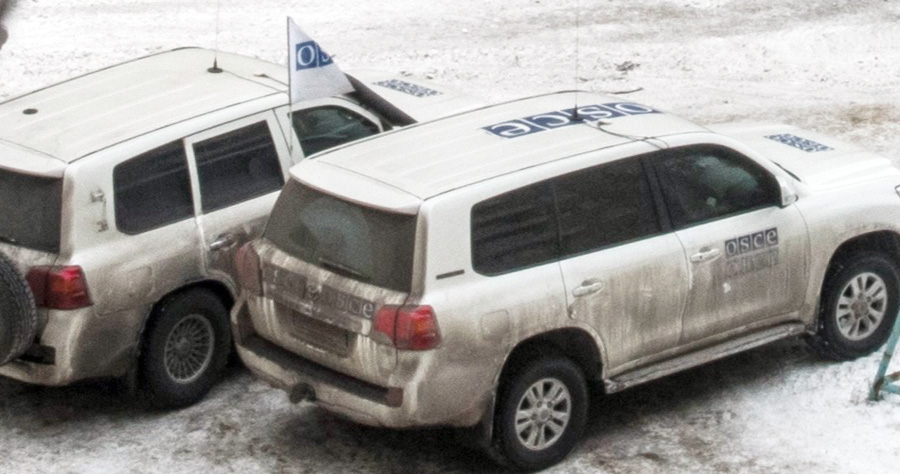 The attention of the Permanent Council has been focused for the past several weeks on Avdiyivka, where combined Russian-separatist forces launched an offensive that resulted in the highest number of civilian and Ukrainian military casualties since the battle of Debaltseve in February 2015. Damage to critical infrastructure left thousands without power, water, or heat for days in subfreezing temperatures. The situation has now stabilized. Repair crews restored power and water service; thousands of families in the area now have access to other critical services. Yet provocations and ceasefire violations continue on the line of contact, where opposing forces are in close proximity to one another and heavy weapons are concentrated.

The United States echoes the European Union’s statement during last week’s Permanent Council meeting that we are deeply concerned about information with regard to the presence of Russian military equipment and personnel in separatist-held areas. The OSCE Special Monitoring Mission to Ukraine’s February 8 weekly report noted 170 weapons in violation of withdrawal lines – a significant increase from the week before. The close proximity of so many heavy weapons keeps the risk of escalation dangerously high. As the EU said last week, Russian denials of responsibility distort the facts and hinder efforts to resolve the conflict. Unfortunately, it will be difficult for Ukrainian forces to withdraw their weapons when combined Russian-separatist forces continue to advance, digging into new positions in Sokilnyky and Stanytsia Luhanska, as reported by the SMM on February 10 and 13.

Fighting in one area can quickly ignite clashes elsewhere along the line of contact. The increase in fighting at Avdiyivka was matched by an 80 percent increase in ceasefire violations throughout Luhansk oblast. Both sides must uphold their commitments to withdraw forces from disengagement areas and hold their fire. On February 7, the SMM recorded mortar strikes against Ukrainian Armed Forces positions at the disengagement site in Stanytsia Luhanska and registered the first ceasefire violations in over five weeks at the disengagement site in Petrivske.

A renewed commitment to a full and lasting ceasefire is urgently needed to protect civilians and critical infrastructure. On February 5, the SMM reported the loss of yet another life – a 16 year-old boy, killed when a shell struck his home in government-controlled Kurdiumivka. Three days later, monitors returned to find 24 new impact sites around the deceased boy’s home, located only 200 meters away from a water pumping substation and 500 meters away from electrical lines. We welcome the appeal made last week in the Permanent Council by the Russian Federation to protect critical civilian infrastructure. Ukraine has previously called for such steps. We urge the Trilateral Contact Group to reach agreement immediately to protect critical civilian infrastructure.

While we welcome the February 15 agreement in the Trilateral Contact Group to withdraw heavy weapons by February 20, it will be critical for combined Russian-separatist forces to provide a full and complete list of weapons. As a demonstration of its commitment to ending the violence, we urge combined Russian-separatist forces to provide a baseline inventory of weapons in the entire security zone, the locations of permanent storage sites, and of all units and formations in the area, as SMM Chief Monitor Apakan called for in in his February 3 letter to the signatories of the Minsk agreements. Combined Russian-separatist forces failed to provide a complete inventory of weapons after the Minsk Package of Measures was signed in February 2015. Now is the time to correct this. We call on Russia to demonstrate that it will no longer pursue a policy of aggression in Ukraine’s Donbas region, and immediately comply with the conditions set out in the Chief Monitor’s letter. As the Permanent Council is aware, our sanctions for Russia’s aggression in Ukraine remain in place.

Russia’s violations of international law and defiance of OSCE principles and commitments continue in Crimea, which Russia occupies and purported to annex, and where it continues to commit serious abuses. Russia continues the repression of Crimean Tatars and ethnic Ukrainians. Russia attempts to stifle those who speak out against its brutal occupation and to silence independent media. Residents of Crimea are being denied the ability to access at least seven online Ukrainian news sources, including some of the most widely-read Ukrainian news sites. Moreover, Russian authorities continue to refuse Ukraine’s request to return filmmaker Oleg Sentsov and activist Oleksandr Kolchenko to Ukraine. Both were arrested in Crimea, transported to Russia, tried there on spurious charges and given lengthy sentences over a year ago. We call on Russia to release these individuals and all other Ukrainian citizens it is holding on political pretexts. This includes Mykola Semena, a Ukrainian journalist who faces up to five years in prison for merely expressing his belief in Ukraine’s unity and territorial integrity. The United States has sent a letter to SMM Chief Monitor Apakan, ODIHR Director Link, and Representative on Freedom of the Media Mijatović, requesting that the OSCE monitor Mr. Semena’s trial in Simferopol, Crimea. We reiterate this request, and once again urge the Russian Federation to allow the international community access to occupied Crimea to monitor the human rights situation on the peninsula.

Crimea remains an integral part of Ukraine within its internationally recognized borders. We renew our call on all OSCE participating States to reject Russia’s occupation and attempted annexation of Crimea. Sanctions will remain in place until Russia returns full control of the peninsula to Ukraine. We again call on Russia to observe the Helsinki Final Act, in which all participating States acknowledged that one another’s frontiers are inviolable and committed to respect the sovereignty and territorial integrity of each participating State.