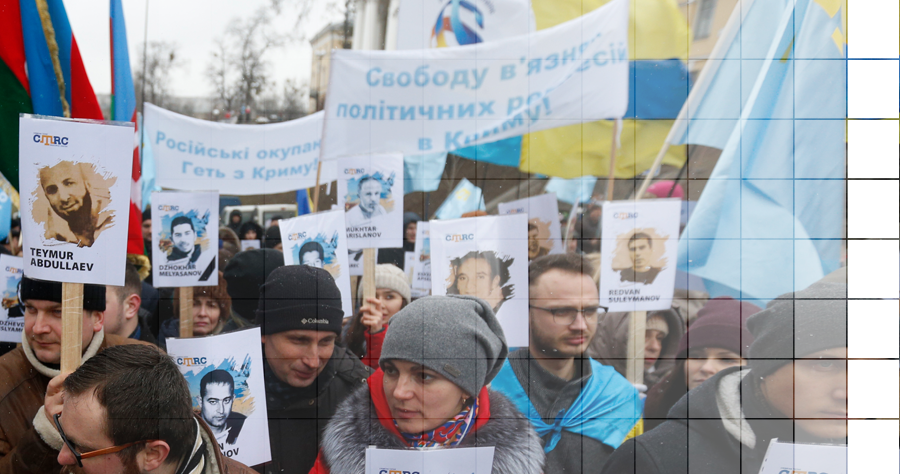 Caption/Description: Ukrainian and Crimean Tatar activists hold portraits with the names of victims of the Russian annexation of Crimea during a rally in Kiev, Ukraine, Sunday, Feb. 26, 2017. (AP Photo/Sergei Chuzavkov)

The United States welcomes the reduction in violence in eastern Ukraine that has come with the August 25 ceasefire recommitment. This renewal comes against the backdrop of markedly more intense and deadly fighting than in the previous year. A true ceasefire, if implemented, would provide an opportunity to take steps to disengage along the Line of Contact, as called for in the Minsk agreements; and could build confidence that the forces that Russia arms, leads, trains and fights alongside are committed to lasting peace in the Donbas.

The United States approaches ceasefires with caution, however. This is the 42nd re-commitment to the ceasefire agreed to in September 2014, and yet over the past three years over 10,000 men, women and children have lost their lives. A genuine and lasting ceasefire, followed by the withdrawal of proscribed weapons, is required to create the space necessary to proceed on the political aspects of the Minsk agreements. Russia is stoking this conflict, and so we, along with others, call on Russia and the forces it arms, trains, leads, and fights alongside, to meet its commitments to improve security conditions on the ground.

In a positive development, we take note of the sides’ July 19 commitment – made during the Trilateral Contact Group’s Working Group on Security Issues – to create “safety zones” around the Vasylivka Pumping Station and Donetsk Filtration Station. We urge the sides to agree quickly on the mechanisms to make this commitment a reality, and thereby stop the destruction that too frequently disrupts the basic water supply for thousands of civilians on both sides of the Line of Contact.

The Special Monitoring Mission (SMM) remains critical to our efforts in Ukraine. The SMM must have full, safe, and unhindered access throughout the entire territory of Ukraine, including the full length of the border between Ukraine and Russia, in accordance with its mandate. Regrettably, this is not the case. Although parties to the conflict agreed to provide the SMM with a map of mines and unexploded ordnance in the conflict areas by June, and to develop a plan to fence or clear those hazards; this has not happened. The SMM continues to wait, and its patrols remain limited to hard roads and daylight hours as a result of this inaction. Additionally, freedom of movement continues to be limited, almost exclusively in non-government controlled areas.

Since we last met, harassment of the monitors has continued. On August 3 at the Donetsk Filtration Station, SMM monitors heard bursts of small-arms fire close overhead as they installed a monitoring camera. On August 13, a so-called “LPR” militant pointed his rifle at an SMM patrol and threatened to shoot if they did not leave the area. Later the same day, while at a Ukrainian Armed Forces checkpoint east of Popasna, an SMM patrol heard the whistling sound of a mortar shell flying and saw its subsequent explosion approximately 500 meters from its position. On both occasions, the Joint Centre for Control and Co-ordination (JCCC) had provided security guarantees for a local ceasefire prior to the mission’s visits. The Russian-led forces, however, again failed to ensure safe and secure access for SMM members, as agreed to in the Minsk agreements.

Violent actions were also directed against SMM equipment. On August 9, the SMM reported that the newly-installed thermal camera at the Donetsk Filtration Station was destroyed by gunfire after having been operational for only one day. On August 9, 10, and 19, SMM patrols assessed small-arms fire as being targeted against its UAV, in dangerously close proximity to the patrols’ position. In one case, the fire was within 20 meters; in the other, a “DPR” militant threatened to seize the UAV footage if the SMM patrol did not delete its recorded images. These instances took place in the presence of officers of the JCCC, who did not intervene, and occurred despite the SMM obtaining security guarantees from both sides in advance of the planned UAV flights.

Threats to the SMM and the targeting of its technical monitoring assets are categorically unacceptable. We view these actions as deliberate attempts to prevent the SMM from fulfilling its mandate. We condemn such behavior. Unfortunately, lack of follow-through on the part of the JCCC promotes a culture of impunity, which has a lasting effect on the conditions under which our monitors operate.

The Mission and the safety of its monitors are our collective responsibility. In addition to ensuring that the SMM has the conditions which it needs in order to operate, we must ensure it has the resources necessary to fulfill its mission. We call on all States to make voluntary contributions to the Mission, which we all acknowledge is a vital component to achieving peace in Ukraine.

The treatment of the population in Russian-occupied Crimea remains alarming and is deteriorating. In August, authorities detained an elderly Crimean Tatar activist, Sever Karametov, for ten days for picketing outside the courthouse in Simferopol in support of his compatriot, Akhtem Chigyoz, deputy chairperson of the banned Crimean Tatar Mejlis, who is the subject of politically-motivated persecution. Another activist, Emil Minasov, was sentenced to a year and three months for expressing his opposition to Russia’s occupation on social media. Aleksiy Stogniy and Redvan Suleymanov were accused of spying for Ukraine and sentenced to three years and six months imprisonment, and one year and eight months imprisonment, respectively; plus a fine of 3.5 million rubles, reportedly on the basis of coerced confessions. Ruslan Zeytullaev had his sentence extended yet again to a total of 15 years imprisonment for alleged involvement with the political movement Hizbut-Takhrir, which operates legally in Ukraine. He has now been transferred far from his family to a prison in Russia.

Likewise, the sentencing of Volodymyr Balukh, a farmer and activist, in a Soviet-style show trial in August to nearly four years imprisonment, and the assessment of a fine of nearly 10,000 rubles in retaliation for his flying the Ukrainian flag and displaying a plaque in honor of slain Euromaidan activists in Russian-occupied Crimea, has chilled free expression. The harassment of members of the Ukrainian Cultural Center, Halyna Balaban and Alyona Popova, who were temporarily detained in Simferopol without charges on August 24, contributes to the climate of fear propagated by the occupying authorities. We salute the Ukrainian citizens who celebrated Ukrainian flag day and Ukrainian independence day on August 23 and 24 in Russian-occupied Crimea. Dozens of brave people demonstrated their allegiance to Ukraine and protested against the occupying authorities, including those individuals who made a powerful video, protesting restrictions on their freedom of expression.

The United States continues to fully support Ukraine’s sovereignty, independence, and territorial integrity within its internationally-recognized borders. We do not, nor will we ever, recognize Russia’s purported annexation of Crimea. We join our European and other partners in affirming that our Minsk-related sanctions against Russia will remain in place until Russia fully implements its Minsk commitments. The separate, Crimea-related sanctions will remain in place until Russia returns full control of the peninsula to Ukraine.