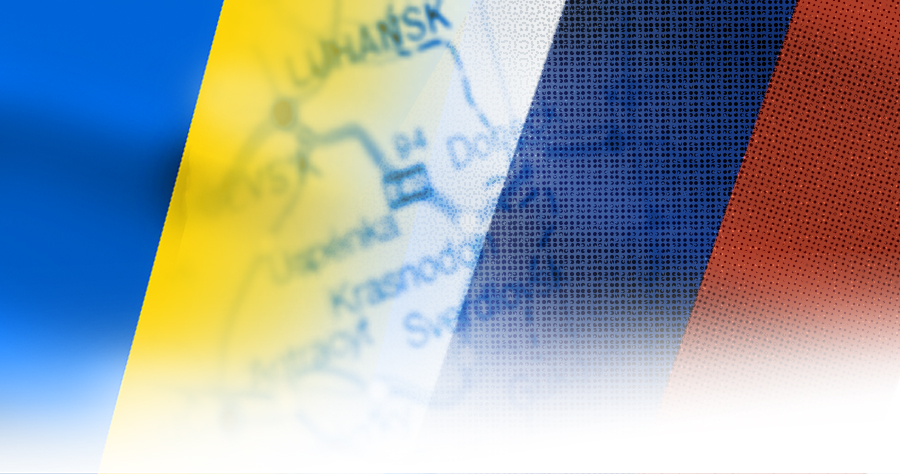 Ukrainian Flag and Russian Flags over map of Luhansk

Nearly two weeks have passed since an explosion killed Joseph Stone, a U.S. citizen and a paramedic with the OSCE Special Monitoring Mission to Ukraine. All 57 participating States have called for a swift, thorough, and impartial investigation into the tragic death of Mr. Stone. It is imperative, therefore, that a thorough investigation move forward quickly, and that the site of the explosion be protected from tampering – a concern raised by Chief Monitor Apakan last week. We call on all relevant parties to lend their full support to the OSCE’s investigation into the incident, and implore the Austrian Chairmanship and Secretariat to remain focused on the matter.

Over the past week, the lives of SMM monitors have again been placed in grave danger. On April 28, an air burst detonated just 50 to 100 meters away from an SMM position near the line of contact in the area of Luhansk under the control of Russia-led separatist forces. Elsewhere along the line of contact that same day, in the town of Kruta Hora, which is occupied by Russia-led separatist forces, monitors reported hearing a shot impact 50 meters to the south of where they were standing – the shots were fired from areas corresponding to “LPR” positions. On May 1, shots struck 60 to 70 meters away from the SMM on the non-government controlled side of Stanytsia Luhanska, apparently fired from government-held territory. These incidents are unacceptable. All forces on the ground must take immediate steps to ensure the safety of SMM personnel.

We welcome the Permanent Council’s statement of support for the SMM that was adopted last week. However, we must once more note with regret that Russia refused to support language condemning attempts to harass or intimidate SMM monitors or guarantee the SMM’s access throughout Ukraine without hindrance, reservation, or delay.

Russia’s refusal to join the rest of the participating States in fully backing monitor safety is consistent with its failure to ensure the SMM has safe and secure access throughout the entire territory of Ukraine, particularly in areas under the control of combined Russian-separatist forces. Access restrictions — combined with threats and intimidation — weaken the SMM. Last week alone, combined Russian-separatist forces restricted the SMM’s access 13 times.

As Chief Monitor Apakan briefed this Council, Mr. Stone was killed by a ground explosion, possibly a mine. The presence of mines and unexploded ordinance present an ongoing risk to monitors and to civilians living in the conflict area. On April 28, a 16-year old boy lost his hand after he unwittingly picked up an explosive device, and one man was killed and another injured after trying to defuse a piece of unexploded ordinance outside their home. The SMM has corroborated at least 30 civilian casualties from mines in March and April alone. We repeat our call for the full implementation of the Trilateral Contact Group’s December 2015 agreement on mine action, not only as a political, humanitarian, and security imperative, but as a necessary safeguard for SMM operations.

Only a visible, verifiable, and irreversible improvement in the security situation will allow progress on the Minsk agreements, starting with a real and sustainable ceasefire, disengagement of forces, and the withdrawal of heavy weapons. Yet Russia continues a pattern of behavior that undermines disengagement. Once again, on April 29, the SMM heard shots inside the disengagement area near Stanytsia Luhanska, forcing another re-set of the seven-day ceasefire clock before disengagement can begin. According to SMM reporting, those shots originated from areas under separatist control. On April 14, the same day Russia-led separatist forces signaled their willingness to disengage from Stanytsia Luhanska, SMM reports indicate combined Russian-separatist forces attacked Ukrainian positions. Moreover, for weeks, combined Russian-separatist forces have positioned over 30 proscribed heavy weapons, including tanks and howitzers, just 15 kilometers away from the disengagement area,‎ on the outskirts of non-government controlled Luhansk city. We call on Russia to take seriously its commitment to disengage at Stanytsia Luhanska and implement an immediate ceasefire.

Abuses perpetrated by Russia against those opposed to its purported annexation of Crimea continue. We call on Russia to drop charges against independent journalist Mykola Semena. Mr. Semena’s sham trial resumed on May 3 – World Press Freedom Day – after a five-week hiatus. Neither independent observers nor media have been allowed to observe the trial. Mr. Semena faces up to five years in prison if convicted on spurious charges of “undermining Russian territorial integrity via mass media” – in other words, for exercising his right to freedom of expression by criticizing Russia’s occupation and attempted annexation of Crimea.

Russia’s aggression against Ukraine has shaken the very foundations of security and stability in Europe, and is antithetical to a Europe that is whole, free, and at peace. The United States affirms its staunch support for Ukraine’s sovereignty, independence, and territorial integrity within its internationally-recognized borders. We do not, and will not, accept Russia’s efforts to change the borders of Ukraine. We join our European partners in affirming that our sanctions on Russia will remain until it fully implements the Minsk agreements, and Crimea-related sanctions will remain until Russia returns control of the peninsula to Ukraine.