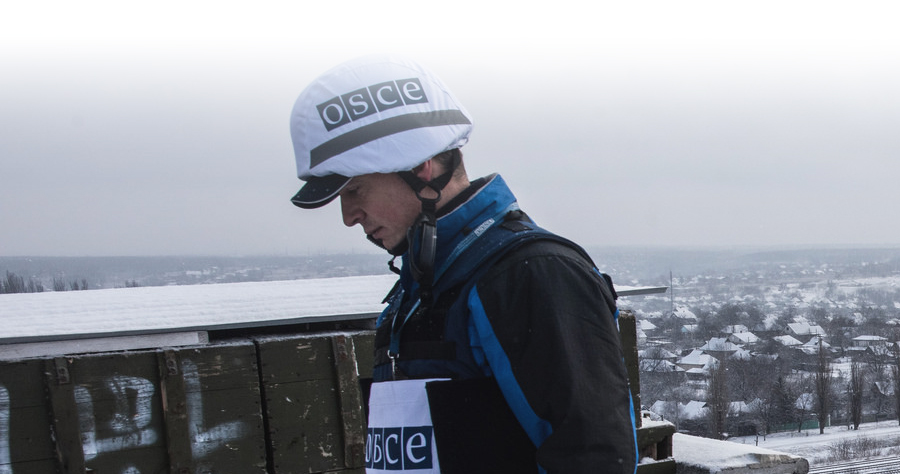 OSCE monitors at the observation post in Avdiivka – one of the hotspots in Donetsk region. December 2016. OSCE/Evgeniy Maloletka

The United States condemns in the strongest possible terms the attacks carried out by combined Russian-separatist forces against the civilian monitors of the OSCE Special Monitoring Mission to Ukraine (SMM).  On Saturday, February 25, at the Zolote disengagement area, SMM monitors located on government-controlled territory observed Ukrainian forces come under fire.  As the monitors fled the scene, an explosion struck the spot where their vehicles had been standing.  The day before, Friday, February 24, four men in military uniform without insignia located in separatist-controlled territory fired at the SMM, with shots striking within five meters of the monitors.  These four men also stole the SMM’s mini-UAV, which the monitors had been using to assess the scope of damage caused by shelling at the Donetsk Water Filtration Plant.  Combined Russian-separatist fighters also shot at SMM monitors on February 3, 13, and 18.

Forty-five of the countries sitting around this table have monitors serving in Ukraine as part of the SMM.  All of our citizens are put at risk by these unacceptable attacks.  Attacks on the SMM are attacks on the OSCE’s ability to contribute to the implementation of the Minsk agreements.  They are attacks on the OSCE’s ability to verify the withdrawal of weapons, to monitor the ceasefire, and to assist efforts to end the conflict.  We call on the Russian Federation and its separatist proxies to immediately cease all hostile acts against the OSCE Special Monitoring Mission to Ukraine.  We also call on Russia and the separatist forces it backs to immediately observe the ceasefire, withdraw all heavy weapons, and allow full and unfettered access to the OSCE monitors.

The United States remains deeply concerned about the volatile security situation in eastern Ukraine.  On February 24, the SMM registered over 1,000 explosions at the Avdiyivka-Yasnyuvata hotspot alone.  Stabilizing the ceasefire can only be accomplished through the verifiable withdrawal of weapons.  It is imperative that all forces provide a complete inventory before removing weapons or their withdrawal cannot be verified by the SMM.  Half-measures will not build confidence.

Continued clashes have put civilians at grave risk.  Power, water, and heat were — for the fifth time in three months — cut to tens of thousands of people as shells severed a main power line to the Donetsk Water Filtration Station.  An environmental disaster was narrowly averted on February 24, when a shell struck the chlorine storage unit at the water filtration station but did not puncture the pressurized gas canisters within.  If it had, a poisonous cloud of chlorine gas could have enveloped the area around Donetsk city, where more than one million people live.  It is imperative that critical infrastructure in the conflict zone be protected, including by the sides through the sharing of coordinates and demilitarizing the areas around this infrastructure. A response plan in case the worst comes to pass is also necessary.  Moreover, combined Russian-separatist forces must provide the security guarantees needed for repair teams to fix already damaged infrastructure, and get power, water, and heat back to the people who need it.

Ukrainians living in the conflict area need real humanitarian relief. Russia and the separatists it backs can improve conditions for people living in the conflict area by opening, as they promised they would, a new crossing point at Zolote.  Restrictions on aid organizations in separatist-held areas must also be lifted.   Progress should be made on the exchange of prisoners and the fate of missing persons.

The Minsk agreements were designed not merely to end the conflict, but to restore Ukrainian government authority over its sovereign territory in the Donbas.  Resolving the conflict requires the return to Ukrainian government control certain areas of Donetsk and Luhansk.  On this, the Minsk agreements are crystal clear.  We therefore condemn the decision by the Russian Federation to accept separatist so-called “passports” as valid for crossing between Ukraine and the Russian Federation.

Our sanctions for Russia’s aggression in Ukraine remain in place.  We stress once again that our sanctions related to Russia’s occupation of Crimea will remain in place until Russia returns full control of the peninsula to Ukraine.  We again call on Russia to observe the Helsinki Final Act, in which all participating States acknowledged that one another’s frontiers are inviolable and committed to respect the sovereignty and territorial integrity of each participating State.