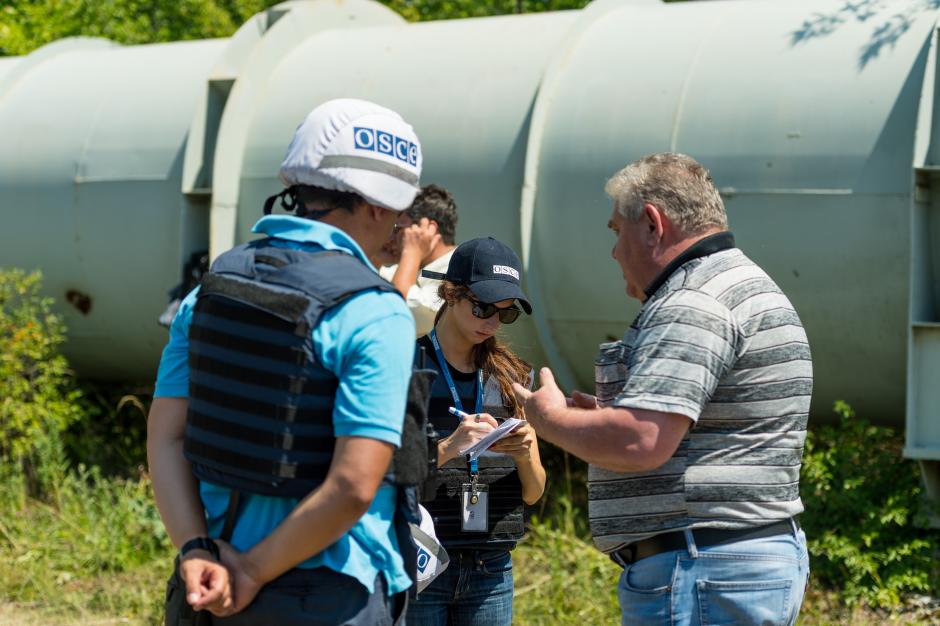 At the outset of my country’s statement today, the United States wishes to extend our condolences to our Ukrainian colleagues and to the families of those killed in the plane crash that occurred near Kharkiv on September 25.  Our thoughts and prayers are with the families and with the victims. This is a sad development.

It has now been more than two months since the July 27 implementation of “additional measures” to reduce fighting in eastern Ukraine, and we are encouraged by the relative calm along the Line of Contact notwithstanding today’s report by the Chairperson-in-Office.

Regrettably, the Special Monitoring Mission (SMM) still reported more than 500 ceasefire violations in September.  While this number represents a significant decrease over violations reported in previous months, we remind participating States that the comprehensive ceasefire called for in the Minsk agreements is yet to be implemented.  Russia has yet to withdraw its forces and heavy weapons and never ceased its support for illegal armed formations. In light of the developments in Europe, that we are seeing these days, maybe it is time for this particular issue to go away.

Over the past six years there have been dozens of “ceasefire recommitments” and “local truces,” yet the bloodshed continues.  We all therefore got to maintain vigilance, support the SMM, and continue to hold Russia accountable for perpetuating this conflict.

Sadly, landmines and unexploded ordnance continue to kill and wound both members of Ukraine’s military and civilians.  The SMM has reported multiple civilian deaths and injuries from explosives in recent weeks, including a man who was injured after he drove over an explosive device in a field.  These incidents remind us that the communities of eastern Ukraine will be dealing for decades to come with the dangerous and deadly effects of years of Russian aggression.

While violence has decreased significantly in the past sixty days, the humanitarian problems resulting from Russia’s aggression persist.  The SMM continues to document lengthy lines at entry-exit crossing points, particularly in Russia-controlled territory, which compound the human suffering and hardships endured by civilians on both sides of the line.  Many of those crossing are pensioners travelling for medical treatment or to get the funds they depend on for their survival.  These are unnecessary and unacceptable delays for elderly and vulnerable segments of the civilian population.  And we welcome today’s statement by Ambassador Grau and by the Chair of the Permanent Council regarding some progress in this area.

One example: the SMM reported on September 21 that two men, one in his forties, the other in his eighties, and a woman in her sixties spent six nights near the entry-exit crossing point at Stanytsia Luhanska waiting for documents from their relatives allowing them to cross into non-government controlled areas.  The SMM reports routinely describe hundreds of people, many of them in their 60s, 70s, 80s, or older, waiting in long lines to cross the Line of Contact.  It should be noted what countries today are actually emphasizing this issue here at the Permanent Council and our concerns should be communicated directly to the people who are involved here.  Who is responsible for these delays?  Not the government of Ukraine; it is Russia’s proxies who are creating these obstacles, delay clearances, and exacerbate the suffering of individuals.  It should be made clear to the people of east Ukraine who is inflicting this misery on them.

The coming winter will bring increased hardship and risk to these civilians if the situation is not improved.  We urge Russia to expedite procedures for civilians to cross the Line of Contact.  We call on Russia to alleviate the hardships its aggression has forced on the civilians of Donbas. And as its responsibility is recognized in this area, any improvement that it facilitates through its leadership will also be noticed in a more positive way.

Russia must direct the forces they arm, train, finance, lead, and fight alongside to cease their harassment not only of the citizens of east Ukraine but of the SMM.  The SMM’s reports document near daily instances of Russia-led forces restricting the Mission’s movement and firing on or jamming the SMM’s UAVs.  Those who willfully destroy SMM equipment should be held accountable, both politically and financially.

Now on Crimea:  Crimea is Ukraine.  Russia’s occupation of the peninsula is the result of Russia’s invasion of its sovereign neighbor.  The sham referendum Moscow orchestrated following the invasion failed to legitimize it.  This behavior throws into question the entire security order in Europe that the OSCE represents.

In Crimea, Russia and its occupation authorities routinely abuse Crimean Tatars and ethnic Ukrainians, subjecting them to politically-motivated arrests and detention.  Occupation authorities place undue restrictions on the freedom of expression and association, and the right to peaceful assembly.  More than 24,000 young residents of Crimea have been conscripted into the Russian Armed Forces, which, as we have said  consistently in this Permanent Council, that behavior is inconsistent with international humanitarian law.

We have highlighted the arrest, trial and conviction of numerous Crimean Tatar civilian journalists and activists, arrested for their membership in a religious organization that is legal in Ukraine, but deemed a “terrorist” organization by Russia.  We repeat, Crimea is part of Ukraine.  Moreover, none of those charged or convicted on these specious terrorism charges are accused of planning or committing any act of violence.  Crimean Solidarity leader Server Mustafayev and those other Crimean Tatars with whom he was arrested and subsequently convicted on September 16 should be immediately released, along with all the Ukrainian political prisoners held by Russia.  We are also troubled by the prosecution of Server Mustafayev’s mother, Venera Mustafayeva, for conducting a single person picket in support of her son the day before his conviction.  We are now down to arresting and prosecuting someone’s mother?

We do not, nor will we ever, recognize Russia’s purported annexation of Crimea.  We join our European and other partners in affirming our Minsk-related sanctions against Russia will remain in place until Russia fully implements its Minsk commitments.  The Crimea-related sanctions will remain in place until Russia returns full control of the peninsula to Ukraine.