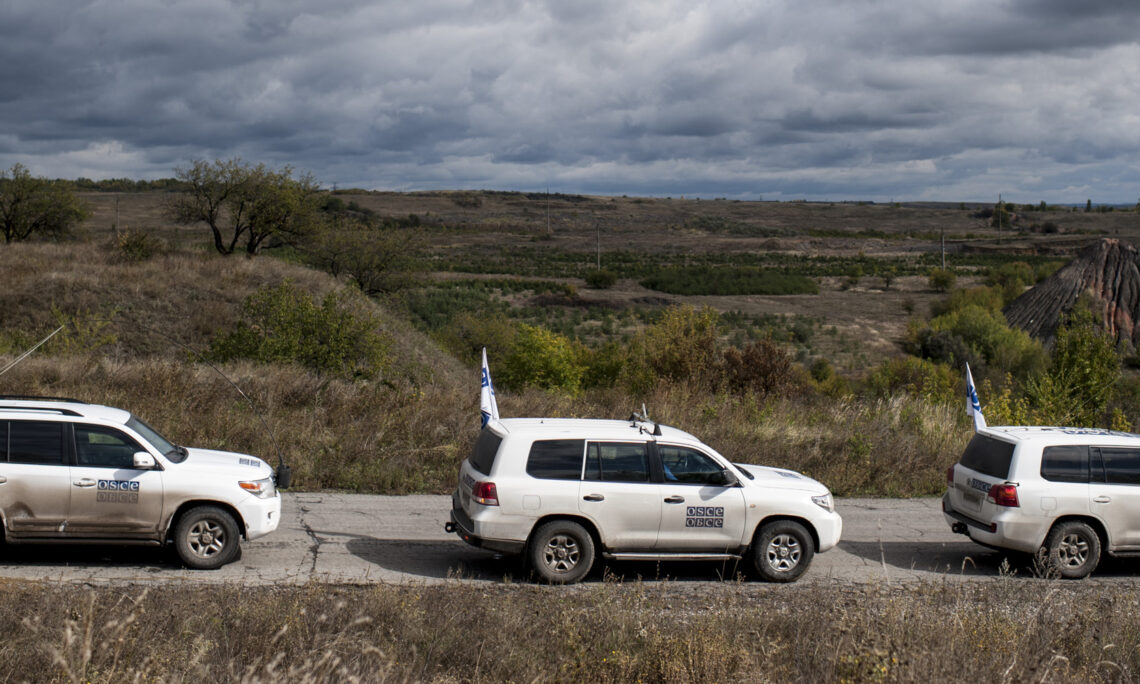 Earlier this year, in this Permanent Council, we marked the 45th anniversary of the Helsinki Final Act.  Its ten guiding principles formulated a ground-breaking approach to keep our populations safe—the concept of “comprehensive security.”  Among these guiding principles are respect for sovereignty, the inviolability of frontiers, the non-use or threat of force, and the territorial integrity of states.  For nearly half a century, the Helsinki Final Act has been our guide as we, collectively here at OSCE, work toward advancing the goals of a peaceful, rules-based international order.

Russia has repeatedly chosen to contravene foundational Helsinki principles, not least by its invasion and purported annexation of Crimea, and its ongoing aggression in eastern Ukraine.  Russia’s contempt – or disregard – for the Helsinki Final Act principles has undermined security in Europe as a whole and has caused untold human suffering.  The conduct goes beyond Ukraine and Crimea to the structure and philosophy and policy of the security in Europe itself. This is why countries are insecure now, or less secure, and take actions that add to insecurity. Russia and Crimea’s issues are the source and spirit of insecurity at this time because of this problem we are addressing here today, here in the Permanent Council right now.

Specifically, we reject the Kremlin’s attempt to impose its will on the future of 45 million citizens of Ukraine.  When the Kremlin feared it couldn’t any  longer control Ukraine’s future course and its chosen path to closer integration with Europe, it used violence to attempt to achieve its aims, resulting in the deaths of more than 13,000 people, tens of thousands more wounded, and 1.4 million people displaced through more than six years of this Russia-controlled conflict.

During the past few months, the guns have been significantly quieter, as we have said. But we also understand that any ceasefire should lead to progress in the next steps in ending the conflict itself.  However, other threats to safety persist and much more must be done to bring the conflict to a peaceful resolution.  We call on Russia to fulfill its Minsk commitments and remove its forces and weapons from Ukraine.  The injuries and death have not stopped; civilians continue to be wounded or killed by landmines buried in their fields or unexploded ordnance lodged in their gardens.  And Russia-led forces in eastern Ukraine continue to impede the movements of the Special Monitoring Mission and interfere with its UAVs.

We hope to see Russia work constructively with Ukraine and OSCE to reach concrete decisions on issues such as demining, establishing new entry-exit crossing points and disengagement areas, and conducting mutual exchanges of detainees.  We often speak about how Russia should match the political will shown by Ukraine; that Russia should end its obstructionism in the peace negotiations.  And I would ask the people of Russia: have you benefited from your government’s six-year long—and so far failed—empire-building attempts in eastern Ukraine?

Elsewhere in Ukraine, Russia’s continuing occupation of Crimea means its residents now live in a place where freedom of expression and religion are no longer respected, but rather abused.  Over 90 Ukrainian citizens languish as political prisoners in detention in Russia and Russian-controlled facilities in Crimea.  These individuals are guilty of little more than voicing their objection to Russia’s occupation, holding membership in organizations deemed “illegal” by Russia, or practicing a religion Moscow finds undesirable and claims is “extremist.” Is this the thinking of the people of Russia?

We call your attention to the case of 36-year-old, blind Crimean Tatar activist Alexander Sizikov detained since July 7, denied appropriate care, and is now being subjected to a one-month punitive psychiatric examination.  Sizikov was one of seven Crimean Tatar activists detained during the July 7 armed searches and raids by Russia’s Federal Security Service.

Sizikov was reportedly arrested in retaliation for peacefully protesting Russia’s repression of Crimean Tatar Muslims and calling for the release of an imprisoned Crimean Solidarity activist.  Sizikov’s attorneys and credible human rights NGOs believe the punitive psychiatric examination is an attempt to declare Sizikov mentally unfit and confine him to effective imprisonment in a psychiatric facility in lieu of formal imprisonment.  Shades of the bad past we thought had been left behind. Sizikov is just one of the many cases in which Russian authorities have subjected Crimean Tatars to intimidation, harassment, detention, imprisonment, and punitive psychiatric examinations as a means to silence opposition to its occupation of Crimea. Is this conduct representative of the values and beliefs of the people of Russia?

It is high time for Moscow to end its widespread campaign of repression in Crimea.  We call on Russia to immediately release all Ukrainians it has unjustly imprisoned to their homes and families, to withdraw from Crimea, and to return full control of the peninsula to Ukraine and eliminate the sore on the security arrangement and the people of Europe

I know that my Russian colleague, Alexander Lukashevich, the Ambassador, holds the OSCE in high regard – we have talked about it.  He has spoken on many occasions with obvious pride about his long history working at this organization.  Despite the difficult period in which we today find ourselves, the OSCE remains a cooperative organization focused on the shared goal of building and maintaining security in the region.  That goal can only be met when Russia ceases its aggressive policies and recommits to the principles of the Helsinki Final Act.

Let me offer a quick and simple step for Russia to earn goodwill and rekindle the spirit of Helsinki: continue the trilateral negotiations with Australia and the Netherlands with regard to the downing of flight MH-17.  We heartily agree with the European Union – and the other countries, Switzerland, Canada and the others that have spoken here today – that more than six years since this tragedy, the 298 victims and their next of kin deserve justice.  The United States supports all efforts to establish truth, justice, and accountability, in line with UN Security Council Resolution 2166.

Mr. Chairman, let me once again make clear, the United States fully supports Ukraine’s sovereignty, independence, and territorial integrity within its internationally recognized borders, including its territorial waters.  We do not, nor will we ever, recognize Russia’s purported annexation of Crimea.  We join our European and other partners in re-affirming our Minsk-related sanctions against Russia will remain in place until Russia fully implements its Minsk commitments.  The Crimea-related sanctions will remain in place until Russia returns full control of the peninsula to Ukraine.