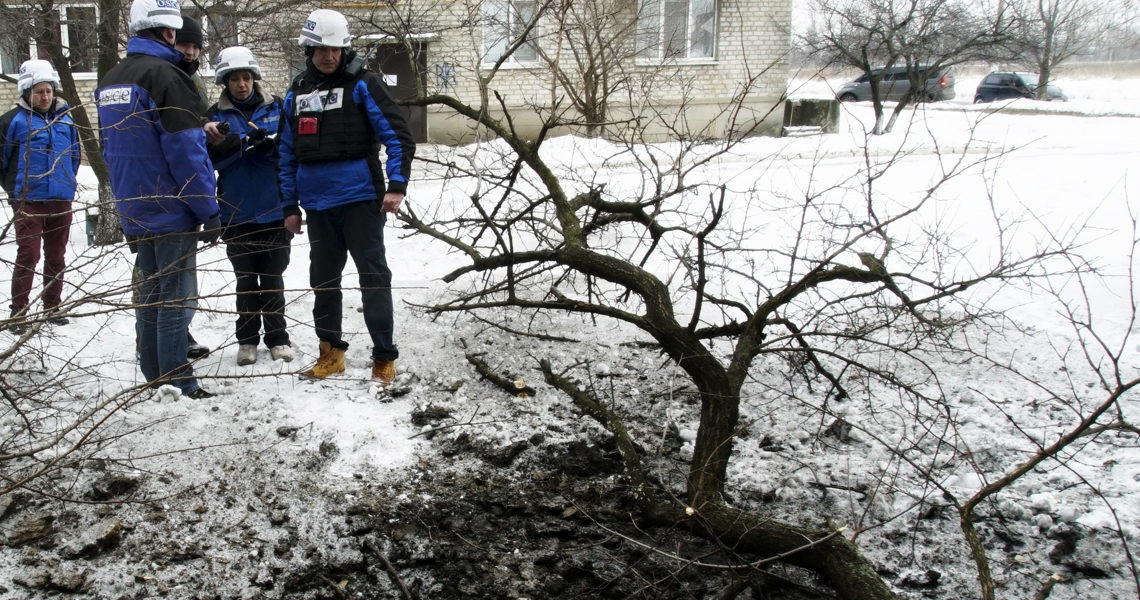 to the Permanent Council, Vienna
February 9, 2017

Thank you, Mr. Chair,
The United States applauds the heroic work of the Special Monitoring Mission to Ukraine in brokering the local ceasefires in Avdiyivka that allowed essential repairs to restore power, water, and heating to tens of thousands of people living on both sides of the contact line. Yet the situation remains volatile. The close proximity of forces and heavy weapons keeps tension levels high and increases the potential for renewed violence. It is now time to adhere to a full, comprehensive ceasefire and to withdraw proscribed weapons from the Avdiyivka-Yasynuvata-Donetsk city triangle, as Russia, Ukraine, and the separatists agreed in the Trilateral Contact Group statement on February 1. And, it is imperative that the SMM – an unarmed, civilian mission – be allowed to operate freely and safely across Ukraine. We condemn the incident in which a separatist fighter shot at an SMM monitor in Kalynove, Luhansk on February 3. This separatist fighter must be held to account for his actions. We must be clear that this is not the first time that separatist fighters have fired at monitors. This endangers the mission and it must stop.

Recent fighting has already taken an enormous toll on the lives of those living in the conflict-affected area. At least 51 civilians living on both sides of the contact line have been injured or killed since January 29. A large explosion in Donetsk city destroyed 20 apartments and left dozens of families injured and traumatized. It is essential that no military forces or weapons are stationed near civilians, yet the SMM collected evidence of a firing site nearby and noted the presence of separatist forces just 260 meters away from the impact site.

Shelling has also destroyed homes and damaged schools in Avdiyivka, killed two people, and wounded two more at Ukrainian government humanitarian centers. The shelling even killed a civilian first responder when it exploded over his ambulance. We are aware of reports of another incident in Svitlodarsk, in which a Russia-backed separatist shot and destroyed a clearly-marked military ambulance – killing the medic and wounding several others. This is unacceptable.

Russia, which continues to supply, sustain, and direct the fighting in eastern Ukraine, has yet to speak out against and put a halt to the shelling and other attacks on civilians in Ukrainian-government territory.

Nearly two weeks have passed since combined Russian-separatist forces launched an offensive in Avdiyivka that claimed the lives of at least 10 Ukrainian soldiers and wounded no fewer than 80 more. There is clear evidence of a military buildup by combined Russian-separatist forces in the area in advance of the offensive. A week before the assault began, the SMM observed trucks which were carrying boxes of ammunition assessed as matching the shape and size of MLRS rockets in the separatist held town of Khrustalnyi. Two days before the assault began, an SMM UAV spotted 45 military-style trucks 500 meters from a railway station in separatist-held Amvrosiivka, which lies only 15 kilometers from the Russian border. Separatists harassed the SMM monitors and delayed them from leaving the site. That same day, SMM monitors were denied access at another separatist-held town, Markyne, less than 5 kilometers from the Russian border. Satellite images show not less than six artillery positions on separatist-controlled territory within striking distance of Avdiyivka. Combined Russian-separatist forces have been expanding their positions in Avdiyivka in the past six months – including into areas on the Ukrainian side of the line of contact. This is a fight for which Russia and the separatists had prepared. As soon as the fighting started, combined Russian-separatist forces blocked the SMM’s access to Yasynuvata – and kept the restrictions in place for the next three days.