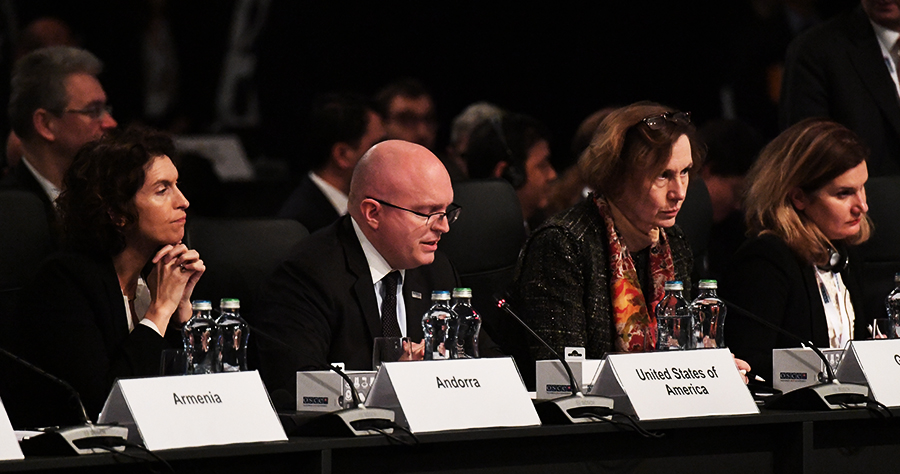 Acting Assistant Secretary of State for European and Eurasian Affairs Philip T. Reeker delivers the opening statement by the United States at the 2019 OSCE Ministerial Council on December 5, 2019. (USOSCE/Gower)

It is an honor to join Ambassador Gilmore and his outstanding team in representing the United States and Secretary Pompeo at this Ministerial meeting under the chairmanship of my old friend, Miroslav Lajcak. I salute the Foreign Minister for his hard work and leadership over the past year.

The European security environment is increasingly marked by mistrust and hot conflict. That is the result of actions by one individual OSCE participating state that contravenes the core principles that have guided this organization for decades: Russia. In this meeting our message must be clear: we insist that nations abide by the commitments they have made, both to other nations, and to their own people. The people of Moldova still await Russian implementation of its commitments made 20 years ago, in Istanbul in 1999.

The OSCE is on the front lines of our collective efforts to deal with security challenges that span the military, economic, and human dimensions of security. Nowhere is that more obvious than in Ukraine. Since 2014, Russia’s ongoing aggression has killed over 13,000 Ukrainian citizens and driven over a million from their homes.

I have just come from a visit to Kyiv, where I reaffirmed U.S. support for Ukraine. President Zelenskyy’s administration has implemented important domestic reforms and has taken steps to energize the peace process in eastern Ukraine. We welcome the recent disengagement of forces at Petrivske, Stanytsia Luhanska and Zolote. We support the Normandy format Summit scheduled for next week in Paris and are hopeful for positive outcomes that will move Ukraine closer to restoring its sovereignty and territorial integrity. In advance of those talks, we again call on Russia to fulfill its 2014 and 2015 Minsk commitments and halt its unprovoked aggression against a peaceful neighbor. The political aspects of the Minsk agreements and any future accords can only be implemented when security conditions allow. We also encourage all participating States to ensure their support of the OSCE’s work in Ukraine is commensurate with their commitment to peace.

It is disappointing the OSCE’s Special Monitoring Mission faces daily harassment and restrictions on movement, the vast majority of which occur in Russia-controlled areas. Why, after five years of this activity, does Moscow still refuse to direct the forces it arms, trains, leads, and fights alongside to cease their harassment of the SMM and permit the Monitors to fulfill their mandate throughout Ukraine, including Crimea? How can it pretend to be a member in good standing of this organization when it refuses to take basic steps to ensure the Monitors’ safety? As U.S. Secretary of State Mike Pompeo underscored in his July 2018 declaration, the United States does not, nor will we ever, recognize Russia’s purported annexation of Crimea.

Russia continues its military deployments in Transnistria and the occupied regions of Georgia without the consent of the Moldovan or Georgian governments. We need to do more as a community to identify avenues to peace in those countries and in the broader region. Supporting the Minsk Group’s efforts to resolve peacefully the Nagorno-Karabakh conflict – which continues to cost lives and stifle the region’s aspirations – is consistent with that mission.

Our community must confront additional security challenges across the region, including hybrid threats, the rise of homegrown or externally motivated violent extremism, and human dimension threats such as the rise of public expressions and violent acts of anti-Semitism and other forms of hatred. Today we face government actions that aim to promote divisions and impede the exercise of human rights and fundamental freedoms at every level. Russia brazenly interferes in the democratic processes of other States and seeks to delegitimize their institutions as it cracks down on civil society actors and peaceful protestors at home. Russia is not alone in using restrictive NGO and media laws and anti-extremism and anti-terrorist statutes to suppress civil society, dissenters, and members of ethnic and religious minorities and in holding political prisoners in deadly prison conditions. These acts contravene the OSCE’s foundational principles and threaten the stability of our region. We should insist that participating States accept the responsibility to implement policies that advance the human dignity of all.

Today we had hoped to welcome agreement on a Ministerial Council decision recording a shared commitment by all 57 participating States to work together to achieve progress toward a modernized Vienna Document by the end of 2020. Alas, Russia, which has attacked its neighbors and is regularly conducting so-called “snap” exercises to demonstrate its military power, was not prepared to make such a commitment. We hope Moscow will reconsider. The United States strongly supports the proposal tabled by 32 participating States as a basis for developing such an updated document. We need to begin to change this unhealthy dynamic, both by working on the Vienna Document and via the Structured Dialogue on Security Issues, which has already proved to be a venue for frank discussion of some of the most difficult security issues we confront today in all three dimensions.

My government will give its full support to the Albanian chairmanship as it takes on these and other challenges in 2020.