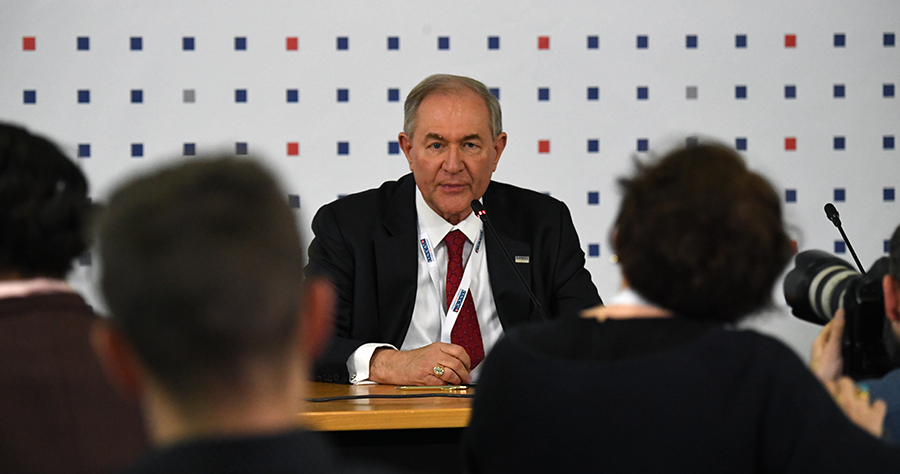 U.S. Ambassador to the OSCE James S. Gilmore III delivers his opening statement and answers questions at a press conference on the margins of the OSCE Ministerial Council on December 6, 2019. (USOSCE/Gower)

Thank you, ladies and gentlemen, for staying. I’d like to start with a brief statement and then I’d be happy to take your questions.

I wanted to start by thanking Foreign Minister Lajčák, for hosting this event. I appreciate Slovakia’s hospitality as host of this Ministerial Council and they made every effort to ensure this meeting was a success.

President Trump asked me to make clear the strong U.S. commitment to defending and promoting the values and principles of the Helsinki Final Act and the OSCE’s Paris Charter. The United States understands the importance of the OSCE, and the role it plays in strengthening regional stability, advancing economic and environmental development, championing human rights, and promoting tolerance.

This being said, the United States has serious concerns about the failure of some states to implement their OSCE commitments. In fact, it is just one state, Russia, that bears primary responsibility for the failure to make progress in fulfilling the promise of the Helsinki Final Act and the Paris Charter. We see this in Russia’s ongoing aggression in Ukraine, its occupation of parts of Georgia, its continued military presence in both Georgia and Moldova, its human rights violations and abuses in Russia and abroad, and its increasingly sophisticated use of hybrid methods to undermine security and democratic systems in all three dimensions.

We see this every year here at the OSCE Ministerial Council. Russia blocks any attempts made by the other participating States to advance a statement on Ukraine. In the same manner, Russia has stymied any OSCE effort to set up a Ukrainian Russia border monitoring mission that would prevent the illegal passage of munitions or improper contraband across the border

Despite this intransigence, we did manage to make progress on several important topics. The Ministerial Council made – or is going to make – a statement in support of settlement of the Transnistrian conflict. But Russia needs to fulfill its OSCE Summit commitments regarding the withdrawal of its troops from Moldova – which they have not done.

In this Ministerial we had a very successful “Hybrid” conference that, for the first time, began to crystalize exactly what was going on both in Europe and internationally, in terms of Hybrid conflict and methods to engage and upset an attack of other countries. The attendance at the Hybrid event was very large and the participation from member countries was very robust.

The United States is pleased to join the Friends of Georgia, and we express unwavering support for Georgia’s sovereignty and territorial integrity within its internationally recognized borders. Unfortunately, it was not possible to reach consensus on a statement on the Russia-Georgia conflict – not yet. We would welcome discussion of opportunities for an increased OSCE role.

It’s also regrettable that Russia continues to block efforts to modernize the Vienna document. Despite being a staunch supporter of military transparency for many years after the Helsinki Final Act was adopted, Russia has changed course in a way that goes beyond what could possibly be justified by any legitimate security concerns.

I look forward to the day Russia ceases its obstructionism and allows this organization to achieve its full potential and joins the overwhelming number of participating States in efforts to ensure our shared security and a peaceful future in the OSCE region.

I will begin to answer any questions anyone might have, but I also want to end by saying that we had a very successful press conference with a very optimistic pass-over from Slovakia to Albania. We are supportive of all of this, we are very pleased with this kind of progress, and the statement what was made was very optimistic and very forward-looking. But the United States cannot fool you with respect to reality to what is going on on the ground.