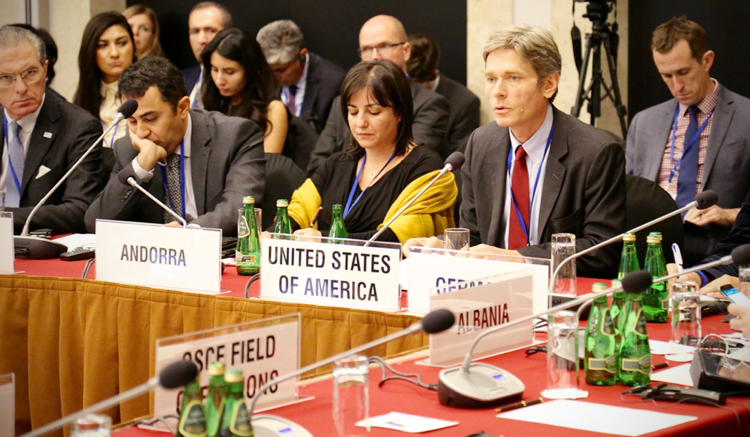 My name is Tom Malinowski, and I am the U.S. Assistant Secretary of State for Democracy, Human Rights and Labor.

Forty-one years ago, the Helsinki Final Act enshrined the principle that respect for human rights within states is essential to security and cooperation among states. The Final Act “recognized the universal significance of human rights and fundamental freedoms” and committed every signatory nation “to promote universal and effective respect for them.”

Time and again, we have seen the wisdom of the Final Act proven. Every threat to the security of Europe, from the Cold War, to the Balkan wars of the 1990s, to Russia’s aggression in Ukraine today, has resulted from the actions of states that deny human rights to their own people; every advance for peace in these situations has come about when respect for rights was restored. That’s why the stakes here are so high.

Yet these principles are being challenged today, even in some of our most established democracies. There are cynical winds blowing across this continent, fanned by those eager to go back to a time when might made right in Europe, by those who see the idealism and universalism embodied in the Helsinki principles as a threat to their power over their people and over neighboring countries.

And so, at a moment when many people are uncertain about the future, I wish to make one thing clear: The United States will continue to uphold and to champion the democratic ideals embodied in the Final Act. We will continue to defend the OSCE and resist every effort to weaken its institutions and our common commitments. We know we can count on the support of the vast majority of participating States and the vast majority of their people in this effort. We are confident that history and time are on the side of the Helsinki ideals, even if certain governments and politicians today are not.

Over the years, some have accused us and countries that support the rights of individuals to assemble peacefully, to speak freely, and to have a say in the decisions that affect their lives, of interference in the internal affairs of others. This view was considered and rejected at our 2010 summit in Astana, when all OSCE participating States reaffirmed that human dimension commitments are matters of direct and legitimate concern to all participating States, and do not belong exclusively to the internal affairs of the State concerned. Intervening in the internal affairs of another state means trying to determine or limit the choices its people make about their future. The defense of human rights does the opposite: it empowers people to decide their own futures.

To that end, the United States has long supported observation of elections across the OSCE, like yesterday’s mission in Russia, not to favor any side (though those who rig elections might see things differently) but to support the right of all individuals to choose their leaders. We have supported organizations in Ukraine uncovering corruption, not just in the former government, but in the current one. Likewise, we have welcomed OSCE observers to American elections. We have never objected to the European Union funding NGOs that campaign against the death penalty in the United States. No confident country or government secure in its democratic legitimacy would be frightened by defenders of electoral integrity or cross-border collaboration among defenders of human rights.

Those governments that persecute as so-called “foreign agents” civil society groups that are so essential to maintaining checks and balances in any democracy are clearly violating the principles of the Helsinki Final Act. They are hurting and disrespecting their people, as Russia so clearly has done in cracking down on citizens groups dedicated to such allegedly dangerous pursuits as fighting torture, educating about HIV/AIDS, and even protecting migratory birds. I join my colleague from the European Union in noting our concern about similar crackdowns in Azerbaijan and countries in central Asia. They are also pursuing policies that will almost certainly fail.

You can cut off activists from foreign funding. You can demonize or persecute those who cooperate with international organizations. Yet in the end people still resist corruption, still protest the destruction of their forests and their lakes, still demand a say in their politics. You cannot stop movements for accountability by blaming foreign interference, because the life force of such movements in all our countries is coming from within, not without. All you will do is to reveal your own insecurity and weakness.

Let’s be clear about where we do see true interference in the internal affairs of states today: we see it in outright military intervention to annex territory or impose one’s will on another country. When Russia, for example, uses threats, force or other forms of coercion to try to keep Georgia, Moldova, and Ukraine from acting on sovereign decisions to deepen their integration with Europe, that is the most blatant example of the kind of intervention that the Helsinki Final Act was meant to stop.

Nowhere is Russia’s intervention in internal affairs more brazen and bloody than in the conflict in Ukraine, which Russia continues to fuel by arming, training and commanding so-called “separatists.” The conflict in the Donbas has cost almost 10,000 lives and displaced 1.7 million people. There must be full implementation of the Minsk agreements to end Russian aggression in the Donbas and return the international border to Ukrainian control. And in Crimea, Russia must end its occupation, stop its repression, including of the Tatar minority, and return control of the peninsula to Ukraine. With the vast majority of countries in the world, we steadfastly refuse to recognize Russia’s attempted annexation of Crimea.

Ladies and Gentlemen, in these opening remarks, I cannot cover all of the important Human Dimension aspects of security, but I will quickly mention just a few more that are relevant to countering terrorism and combatting intolerance. In upcoming sessions, we’ll discuss these subjects and other subjects more extensively.

Terrorism threatens all of our countries. Many of us have suffered grievous attacks. Most of us are partnering to take the fight to those responsible. Here at HDIM, where we focus on the Human Dimension of security, it is also important to recognize that the choice some states try to impose on their citizens — between security and freedom — is a false choice. Terrorists do not need free elections, free media, or free speech to walk into a public place and gun people down. But these freedoms are needed by the civic organizations through which citizens organize themselves against violent extremists, and the political movements that give people the hope that change can be won peacefully. To limit our freedom is to lower our defenses. The United States has learned from our own experience that we can’t afford to do that.

Nor can we afford the rising intolerance that is a byproduct of the fear terrorism creates. Today’s populist demagogues propagate a message that in many ways mirrors the ideology of Da’esh – blaming minority groups, migrants, and refugees for their nations’ problems, selling the illusion that a return to an imagined past of racial purity will bring safety. Political leaders and public figures, including in the United States, bear a special responsibility to condemn this intolerance, and to remember our history.

Let us remember today the Poles, including Polish Jews, who fled this country in1939 and were welcomed in Muslim Turkey, the free French refugees who found safety in North Africa in 1940, the Hungarian freedom fighters who came to America and many of our countries after 1956. I think it’s safe to say that not all these people had their papers in order when they bundled their families onto a boat or crawled through a hole in a border fence to reach safety, any more than the Syrians of today. Here is what it would not be safe to say: that the tables will never turn, that we ourselves will never again need the generosity of others?

Ladies and gentlemen, we are meeting at a time when all ten of the OSCE’s foundational principles are under attack. Our response to those breaking the rules shouldn’t be to rewrite them, but to reinforce them. We must defend our foundational principles and protect the independence, mandates, and budgets of the OSCE institutions that translate the principles into practice, including ODIHR, the Representative on Freedom of the Media, and the High Commissioner on National Minorities. They hold all of us accountable. None of us should fear them.

My delegation welcomes honest discussion of our own country’s challenges. This year, as before, we will report on the promises we made at the previous HDIM, and I encourage other delegations to do likewise.

It is also a pleasure to be here in the country of my birth, which so graciously hosts this annual gathering, and is home to the Office for Democratic Institutions and Human Rights (ODIHR) and the Community of Democracies. Poles have sacrificed and contributed so much in the cause of democracy, for their sake and for others, and the world needs Poland to lead by example more than ever. As Poland works through its current constitutional challenges, I hope that it will continue to take into account the views of civil society and the recommendations of the Venice Commission, so that the process and its outcome serve as further demonstrations of Poland’s deep commitment to democratic principles and the rule of law.

From the beginning, human rights defenders have been the life force of the Helsinki process. I especially wish to thank the activists and human rights defenders who have taken personal risks to come here. I also want to pay particular tribute to those whose governments prevented them from being here. Fortunately, their voice will be heard anyway, as we will be beaming them into our HDIM conversations through the power of technology. To those governments that engage in this practice, I’d say that the blocked activists may get even more attention than those who are here. So, congratulations.

At HDIM and every day throughout the year, we will stand with those who work in Baku and Ashgabat, Moscow and Dushanbe, Ankara and Astana, Budapest and Bishkek, Minsk and Tashkent, to defend human dignity, universal rights and democratic government. I hope our discussions will be worthy of their courage. With their contributions, as we have so often before, we will beat back the challenges, and keep realizing the vision and purpose of this extraordinary organization.