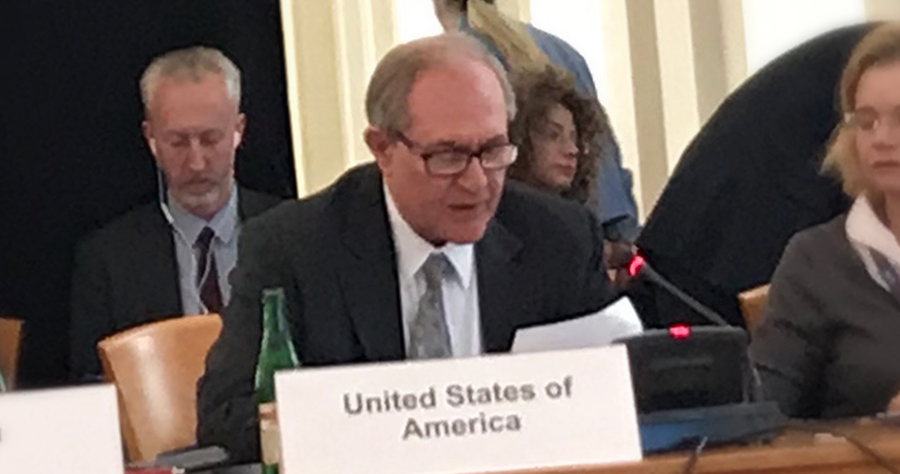 U.S. Mission to the OSCE Ambassador James Gilmore delivers the U.S. opening statement at the start of the 27th Economic and Environmental Forum in Prague, Czech Republic on September 11, 2019. (Photo: Brink/US State Department)

I would like to begin by thanking OSCE Chairman-in-Office Lajčák, OSCE Secretary General Greminger, Albanian Deputy Minister Xhafaj who spoke here today, and our keynote speakers for your introductory remarks. I’d particularly note the remarks with regards to the energy sector, and I’ll address this subject, as well, in these remarks. I’d also like to extend special thanks to Ambassador Žugić and his team for organizing, and to Czech Foreign Minister Petříček for inviting us to your beautiful ministry for the Economic and Environmental Forum and his statement describing energy security and the risks therein.

I am excited to be in Prague to discuss energy security and environmental governance in the digital era. This is my first OSCE Second Dimension event, and, by my being here today, we’d like to underscore that energy security is a top priority in the U.S. National Security Strategy, as it is vital to most countries here today and seated here today. I appreciate the Slovak Chairmanship’s willingness to engage on such a complex issue of importance to the entire region.

The Chairmanship’s Food for Thought paper is on target that “secure, affordable, reliable and sustainable energy lies at the heart of economic prosperity and growth throughout the OSCE region.” And it is correct in noting that cyber attacks and brown outs underscore that our current systems are under stress. But in modern societies, energy security is a critical need beyond just our economies: our citizens rely on energy to maintain the coherence of our social and political fabric.

The Second Dimension cannot be OSCE’s overlooked middle child: it is critical to military security issues and operations and to human interaction and civil society. It is a critical pillar of the OSCE’s comprehensive security approach, as laid out in the opening remarks. When countries trade fairly with one another, they are less prone to violent conflict, and as the statement of the Chairman-in-Office stated, force isn’t just military force. When one state uses unfair practices to advance its own economic and political interests, trade can become a political weapon. In societies that are heavily dependent on the steady supply of energy – for telecommunications, as well as for basic needs like heat and light – the weaponization of energy is a dangerous threat. We have seen Russia disregard the market and use its gas and oil as a foreign policy tool at least 20 times since it cut off oil to Latvia in 2003 in an effort to assert control over oil routes. Russia has cut Ukraine’s gas supply at least six times since 2006, each time coinciding with an internal political event it did not like.

My country remains a world leader in providing affordable, abundant, and secure energy to our citizens, while protecting the environment and reducing emissions through job-creating innovation. This success is largely due to the development and deployment of innovative energy technologies, including in nuclear, shale gas, renewables, battery storage, and more efficient vehicles. By promoting affordable, reliable, and clean energy, as well as energy efficiency, we are creating jobs and supporting overseas market opportunities for U.S. companies. Over the last two years, these innovative energy technologies have created more than 430,000 new jobs.

As the region and the world’s demand for energy increases, brownouts, and supply disruptions erode existing infrastructure, reduce economic productivity, undermine stability, and may lead to violent conflict over scarce resources. We need new supplies as well as good conservation strategies, including through new technologies and renewables.

None of these issues can be addressed in just one committee, so we welcome the OSCE’s cross-dimensional approach. The United States remains steadfast in implementing OSCE commitments in every dimension, and the dimensions are interlinked. An OSCE Ministerial Council decision in the Third Dimension protecting equal rights for women, for example, must necessarily apply in the Second Dimension, when considering women’s rights in the workforce.

The Second Dimension is not “apolitical.” It should be a place for open and honest policy debate and, through debate, consensus. But choosing whom to connect to, and whom to exclude, under the topic or rubric of “connectivity” is political. Using “connectivity” to advance the credibility of organizations dominated by one state and operating contrary to democratic and transparency requirements for OSCE partner organizations in the Istanbul Document is political. There is nothing wrong with this committee being a venue for difficult debate. Our citizens expect us to identify and resolve economic and environmental security threats. Through policy debate, we can inform the Secretariat, the field missions, independent institutions how to move forward effectively.