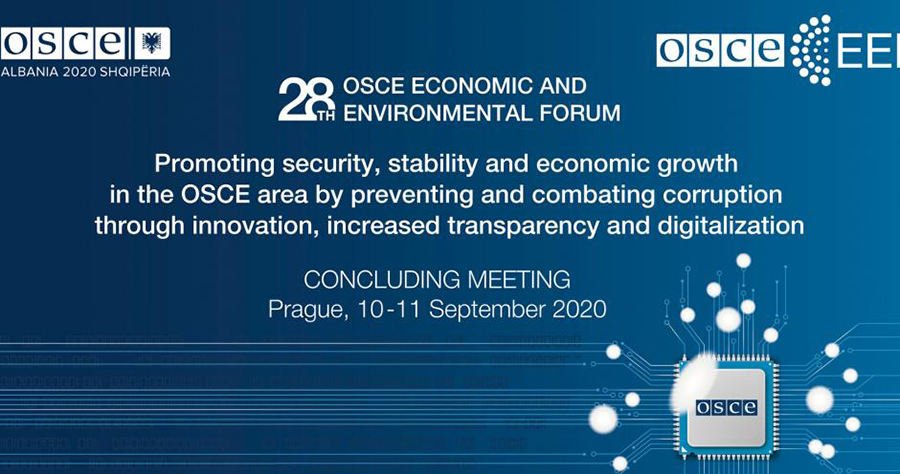 Concluding Meeting of the 28th OSCE Economic and Environmental Forum in Prague. (OSCE)

I would like to begin by thanking OSCE Chairman-in-Office Rama, OSCE Secretariat Officer-in-Charge Yrjölä, Albanian Deputy Minister Xhafaj who spoke here today, and our keynote speakers for your introductory remarks.  I’d also like to extend a special thanks to Ambassador Zugic’s team for organizing this event, and to Czech Foreign Minister Petricek for hosting the Economic and Environmental Forum at his beautiful ministry – even if some of us are participating virtually and not in person.

Under Secretary Krach emphasized the value of trust in reducing corruption and promoting growth.  The United States appreciates the Albanian Chairmanship’s focus on combating corruption as a means to  advance social and economic development and our shared security.  The Second Dimension is critical to the OSCE’s comprehensive security approach and we can and should discuss this issue in this forum.

At the 2014 Basel Ministerial we made explicit in an MC decision that corruption is a major impediment to the prosperity and sustainable development of our countries.  Today, corruption continues to pose a critical threat in many parts of the OSCE region and still demands our urgent attention.

We recognize that citizens trust their national institutions when they can deliver public services in a predictable, efficient, and reliable manner.  Businesses are more likely to invest where there is a level playing field, where they will not be expected to pay bribes or succumb to nepotism, where the rule of law is respected, and where they know contracts will be fairly established and enforced.  It is easy to see how political and economic security are undermined when these expectations are not met.

Corruption enables malign influence.  Exploitation from malign actors erodes public trust in democratic systems and undermine their resilience.  Accountability and transparency are indispensable to preventing this.

Geopolitical competition is a fact of life in our current security environment, and it is “hot” in the second dimension.  We have seen what happens when unfair practices are used and how trade and investment can be weaponized:  the energy sector is a prime example.  Across the OSCE region and beyond, the PRC is using predatory lending, state-subsidized investments, and unfair trade practices to rewrite international rules in service to Beijing’s economic interests.  In addition, the PRC is also pursuing a national strategy of “military-civil fusion” to acquire, divert, and steal cutting-edge technologies and which it pursues through investment as well as deceit.  And, as reflected by the growing awareness of the dangers of surrendering 5G networks to Chinese telecommunications vendors, we should all be vigilant when critical infrastructure and supply chains are exposed to disruption, manipulation, and espionage, putting sensitive government, commercial, and personal information at risk.

These calculated actions by the PRC and others betray a lack of respect for core democratic values such as transparency, fairness, the right to privacy, and the rule of law.  The contrast between these approaches and our shared and stated values as articulated in the OSCE’s key documents is obvious.  We are all made less secure when actors exploit gaps in transparency, digital security, public procurement and financing, and anti-money laundering capacity.  In contrast, the adoption of international standards for infrastructure, investment, digital technologies, and other sectors would enhance transparency, secure supply chains, and attract private investment.  And they promote energy diversification and critical infrastructure resilience in the face of coercive, predatory, or unreliable behavior.  Such standards, and the trust networks Under Secretary Krach discussed, allow states and businesses to focus on economic growth, confident that their trade partners’ business environment is safe, and there are no threats to their economic sovereignty.

Just as corruption affects everyone, nobody is immune from the challenge of trafficking in natural resources, one of world’s largest transnational organized criminal activities.  The risks of this trade are manifested in greater corruption, environmental degradation, and health threats such as the current pandemic we are all facing – which may have its zoonotic disease origins in wildlife wet markets and trafficked pangolins.  The United States recognizes the nexus of illicit trafficking of natural resources, corruption, and organized crime and supports the OSCE’s efforts to take the lead and contribute to our security by addressing it.  Despite their dissimilar goals, we know criminals and terrorists exploit the same avenues for trafficking.  This means trafficking in wildlife and other natural resources leads to money laundering, smuggling, and corruption that benefits transnational organized crime which may directly enable terrorists.

To build on our discussions about corruption and natural resources trafficking throughout the past year and in light of the pandemic, it is timely for this community to develop and agree a Ministerial Council decision on this issue.

A decision on anti-corruption will emphasize the importance of building the resilience of democratic institutions to criminal and foreign influence through effective investment screening and improving the business environment, while highlighting the strong linkages between corruption and organized crime so the adversaries are clear.  A decision that speaks to illicit exploitation of natural resources will demonstrate our shared commitment to prevent and combat what we refer to as conservation crimes, namely trafficking in timber, wildlife, precious metals, and gemstones.

As we continue our dialogue in the days and months ahead, I strongly encourage participating States to consider the irreplaceable value of transparency in preventing and combating corruption.  I also urge participating States to reflect on the reliability of trust-based networks when compared to the predatory trade and investment practices of those like the PRC who seek to use economic power to gain control over others.  I welcome the opportunity to move towards a consensus on these shared challenges and assure you the United States is fully engaged in the OSCE on preventing and fighting corruption.