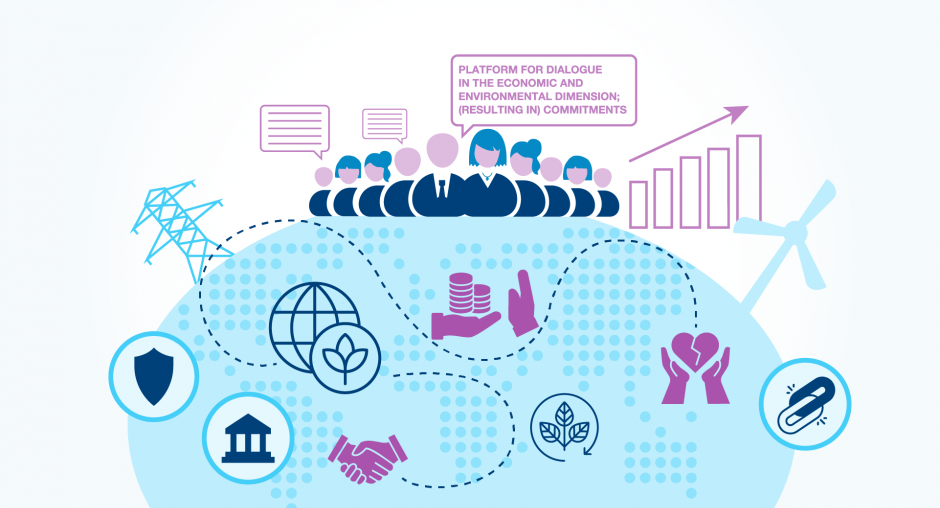 As prepared for delivery by Bahram Rajaee, Political Officer
February 15, 2021

I would like to begin by thanking the Chairperson of the Permanent Council, Ambassador Funered, and OSCE Secretary General Schmid, who both spoke here earlier this morning, as well as our keynote speakers for their remarks. I’d also like to extend a special thanks to the Office of the Coordinator for Economic and Environmental Activities for organizing this event under the continuing pandemic conditions.

The United States deeply appreciates the Swedish Chair-in-Office’s decision to promote women’s economic empowerment—in all its aspects—as a means to improve security in the OSCE area, particularly as it has been ten years since our last focused engagement on this topic, when the 2011 Vilnius Ministerial Council adopted the decision on Promoting Equal Opportunity for Women in the Economic Sphere.

The United States recognizes the linkage between gender equality and security and stability in the OSCE area. Barriers to full gender equality include violence in the family, harassment at work or online, discriminatory laws and cultural attitudes, conflict, forced migration and displacement, and poverty. To the extent that gender inequality persists in our respective countries it makes the OSCE area poorer, less resilient, less democratic, and less stable.

Research shows when women meaningfully participate in peace negotiations, the likelihood that the resulting peace plan will last more than two years increases by 20 percent. In turn, this means that investing in women’s involvement in conflict prevention and resolution in fact saves untold lives while mitigating the costs of conflict—a key consideration for a regional security organization such as the OSCE. The United States will continue to adapt its foreign policy tools, programs, and training to improve outcomes in equality for, and the empowerment of, women.

The new U.S. administration, which began its term on January 20, includes the first female Vice President in U.S. history, Kamala Harris. Moreover, President Biden’s nominees for his 24-member Cabinet will include 12 women. This is the highest concurrently serving number in U.S. history—including the first female head of the Department of Treasury and female Director of National Intelligence, along with the heads of the Departments of Energy, Interior, Commerce, and Housing and Urban Development.

As OSCE participating States, we have made a number of commitments to gender equality. Furthermore, as UN Member States, we have agreed to Sustainable Development Goal #5 regarding “a commitment to achieve gender equality and empower all women and girls.” And we should all take some comfort in the global progress that has been made in the past few decades, be it in: improved girls’ access to education; lower rates of child marriage; sexual and reproductive health and rights; higher women’s participation in parliaments; or a greater number of women political leaders.

In the United States, we have seen similar improvements where women now hold more than half of all professional-level jobs; earn almost 60 percent of undergraduate degrees and 60 percent of all master’s degrees; and comprise 59 percent of the college-educated, entry-level workforce. Moreover, 75 percent of American companies believe that gender diversity is a business imperative and include gender equality in their top ten business priorities, and the number of corporate board seats held by women in the United States has doubled since 2000. Since 1980, women’s pay in the United States increased 32 percent while men’s pay fell slightly (in real terms).

Yet, as we are all aware, far more remains to be done as obvious obstacles and forms of discrimination persist. Let us identify some of the remaining challenges and their causes clearly. For example, in the United States today, women still earn

less than men and a pay gap of 22 percent persists. The percentage of women on Fortune 500 corporate boards is only 17 percent. And women are still underrepresented in the breadth of U.S. political leadership, comprising 27 percent of members in the U.S. Congress; 9 of 50 state governors; and 23 percent of the mayors of all U.S. cities with populations greater than 30,000.

In the OSCE region, exploitation of and violence and abuse against women is fueled by persistent conflicts and social inequality, all of which helps entrench the cycles of vulnerability, instability, and marginalization that prevent participating States from realizing their commitments.

We must also keep in mind the particularly devastating impact of the coronavirus pandemic on women, and its significant negative consequences for our economic recovery.

The pandemic has disproportionately affected women, including through gender-based violence, increased care responsibilities, economic losses, and greater participation in front-line professions such as nursing, food service, and teaching. Per a July McKinsey Global Institute report, women comprise 54 percent of pandemic-related job losses, but only 39 percent of the global labor force. And these effects appear to be increasing the longer the pandemic continues: in September, 80 percent of the 1.1 million people who dropped out of the labor force in the United States were women.

In addition, the burden of homeschooling and childcare during the pandemic has also largely fallen to women; according to a report co-authored by Oxfam, by June, American women were spending 10-15 more hours per week on caregiving than before the pandemic.

Finally, in 2019 the International Telecommunications Union observed that women are 17 percent less likely than men to have access to the internet. This illustrates the persistent and broad gender digital divide we face—where women and girls’ access to, use of, and development of information communication technologies lags behind that of men and boys. In normal times, this divide poses a major obstacle to women’s empowerment and equal participation. In the current context of the pandemic, this disparity threatens our collective economic recovery and our security, given the sheer number of essential social and economic functions that have now moved online due to necessity.

If our public policy responses to the pandemic do not account for the causes and lingering effects of these stark realities, our full economic recovery will suffer, even

possibly preventing women from retaining their pre-pandemic gains, let alone providing a foundation to make further progress. This would be an unacceptable outcome.

The OSCE itself has a key regional role to play in addressing these challenges. For example, recent reports by the OSCE Parliamentary Assembly and ODIHR highlight how women are at greater risk of domestic violence and economic insecurity due to the pandemic. The OSCE-led survey on the Safety and Well-being of Women in Southeastern and Eastern Europe is a landmark instrument that illustrates substantive OSCE contributions to policy-making through providing comparable data on violence against women. Finally, OSCE field operations continue to assist host countries to improve gender equality through the promotion of women’s political participation in elections and developing their ability to influence public debate by freely exercising their views.

The United States strongly supports these efforts as well as the equal opportunity of women to obtain leadership and staff positions in the OSCE bodies themselves. We continue to urge all delegations to promote highly qualified female candidates for any and all open positions. Participating States must model the behavior they say they want to encourage in this regard, and we welcome steps to improve equal opportunity in hiring at the organization. The appointment of Helga Schmid as the new Secretary General is a promising step. The OSCE must continue to advance a zero-tolerance policy on harassment and policies to combat gender discrimination and provide equal opportunities for advancement.

I welcome the opportunity to discuss these questions with other delegations in the 2021 EEF meetings, and hopefully to move toward a consensus on them. I assure you the United States is, and will remain, fully engaged in the OSCE on the economic empowerment of women.