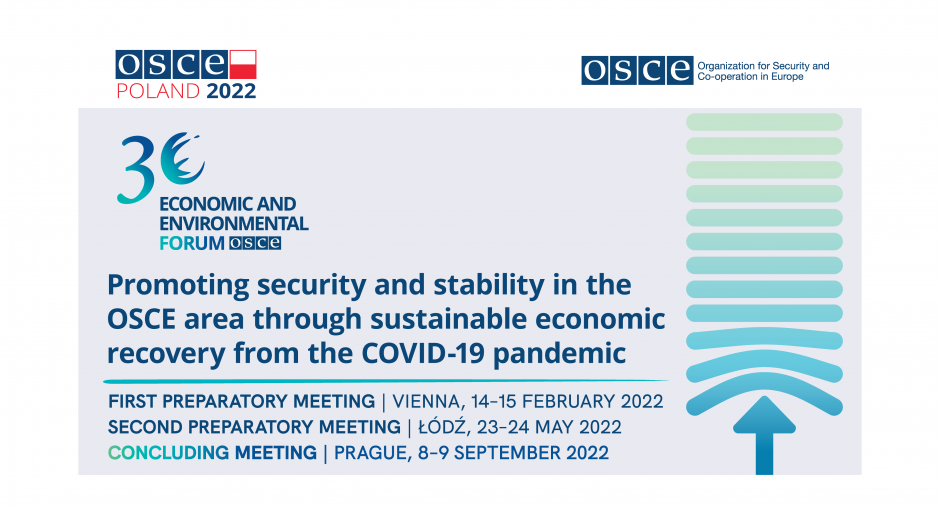 As prepared for delivery

I would like to begin by expressing my appreciation to our Chairman-in-Office, Foreign Minister Rau, and to Foreign Minister Lipavský, Secretary General Schmid, and Deputy Minister Demchenkov for their introductory remarks, and to Ambassador Hasani and his team in the Office of the Coordinator of OSCE Economic and Environmental Activities for their support in convening this meeting.

Since this meeting was first conceived, the security situation in Ukraine and more broadly across the OSCE region has deteriorated significantly.  By pursuing its war of conquest in Ukraine, Russia has shamelessly and blatantly contravened the founding principles of this organization,  undermined the European security order, and generated human suffering and misery, including through widespread death and destruction on a scale not seen on this continent since the Second World War.  This meeting must therefore squarely address the destruction, the economic devastation, and the humanitarian crisis Russia’s aggression has caused.  The OSCE’s Second Dimension and OCEEA will have an important role to play in helping overcome the economic and environmental consequences of Russia’s brutal war.

We appreciated and supported the CiO’s decision at the start of the year to focus on promoting security through sustainable economic recovery from the COVID-19 pandemic.  Undoubtedly, the pandemic has caused, and continues to cause, enormous economic and social damage to our communities.

Yet it is also an undisputed fact that Russia’s brutal war has now surpassed the pandemic as the greatest cause of economic damage and human insecurity in the OSCE region.  Underscoring this reality is the UN’s World Economic Situation and Prospects report issued this May, which states the “war in Ukraine has upended the fragile recovery from the COVID-19 pandemic.”  The World Bank now estimates that global economic growth will slow from 5.7 percent in 2021 to 3 percent in 2023 – and that most of the decline is attributable to the effects of Russia’s further assault on Ukraine, which began in February, a mere six months ago.  Perhaps most sobering is the complex reality we now face, namely the combined security implications of Russia’s aggression, including on food and energy security, the lingering impact of the COVID-19 pandemic, and other critical challenges playing out on a longer timeline, such as climate change.  We commend the Polish Chair-in-Office for convening this meeting given the new security landscape and for inviting an impressive list of participants to speak to these challenges over the next two days.

Later today we will hear from Ms. Helaina Matza, who serves as Director of Energy Transformation in the State Department’s Bureau of Economic Growth, Energy, and Environment.  She will discuss the role energy transformation plays in promoting sustainable economic recovery, energy diversification and security, and green growth.  At a time when Europe is on the precipice of an unprecedented energy crisis due to Russia’s weaponization of fuel resources, it is fitting to focus on the energy sector.  We are witnessing an unprecedented effort by Russia to undermine Europe’s energy security by disrupting oil, gas, and nuclear supplies.  We have witnessed unilateral gas cutoffs and extremely dangerous military activity around nuclear power plants, most notably Russia’s armed seizure of the Zaporizhzhya nuclear power plant – Europe’s largest. The risks to the entire world associated with these reckless actions cannot be overstated.

The United States condemns in the strongest terms Russia’s disregard for nuclear safety and security.  We call on Russia’s forces to cease all military operations at or near Ukraine’s nuclear facilities and return full control of the Zaporizhzhya Nuclear Power Plant to Ukraine.  We strongly discourage combat operations near the plant and are deeply concerned about reports of potential damage to the plant itself and the untenable conditions under which Ukrainian personnel are working as a result of Russia’s reckless behavior.  The situation at Zaporizhzhya is merely one instance from the long and growing list of Russia’s egregious abuses of the basic norms of civilized behavior  – but it clearly highlights the utter disregard the Kremlin exhibits for human life and the costs of its actions for us all.

Another example is how Russia continues to disrupt agricultural commodity supply chains by targeting and destroying Ukraine’s agricultural land, transportation, and storage infrastructure necessary to grow, process, and export food staples.  Russia’s actions are exacerbating existing food security challenges, including by driving costs higher and putting millions of people around the world at increased risk of hunger.  Ukraine normally exports more than 5 million tons of grain each month and recent deliveries only account for about 62 percent of its pre-war monthly exports.  Ukraine still has almost 20 million tons in storage — enough food for several hundred million people, according to the Food and Agriculture Organization and World Food Program.  And some projections suggest Ukraine’s grain harvest in 2022 will be just above half what it was in 2021.

It is not too early to start preparing the plans now for how to mitigate and remediate the disastrous conditions Russia has unleashed on Ukraine and the surrounding region.  In that spirit, we look forward to engaging in wide-ranging discussions with the delegations attending this important event, and hearing from experts and speakers while sharing our own experiences so we can tackle these challenges together.  While Russia’s war is focused on Ukraine and its consequences are most acutely felt by the people of Ukraine, we must also recognize that this is an assault on our economies, our environment, and our shared principles.