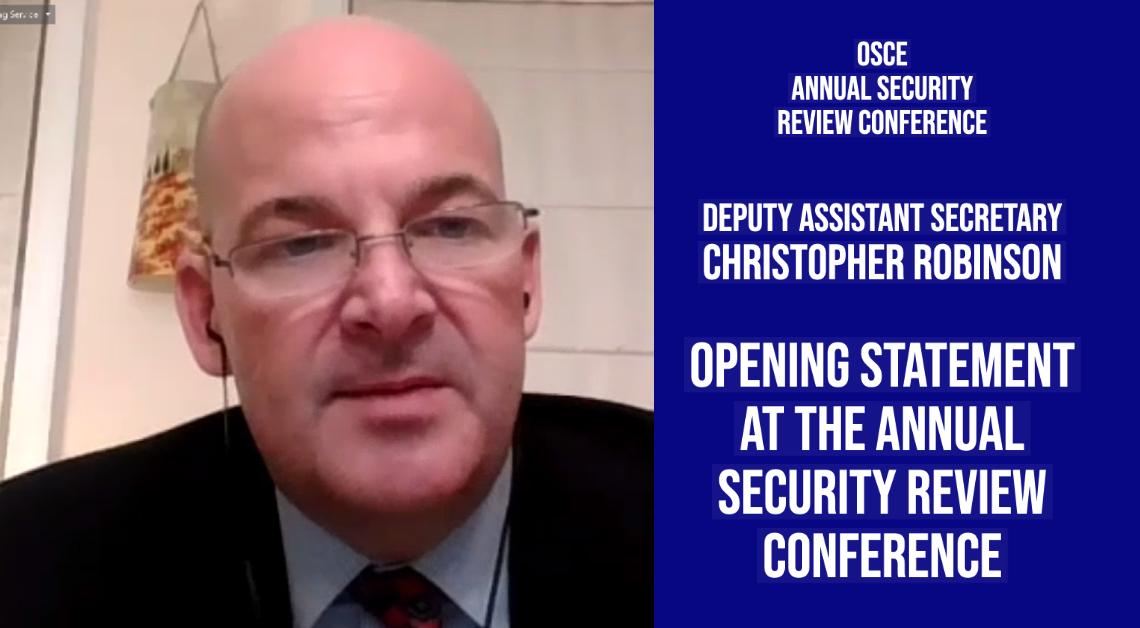 The United States strongly believes participating States should not treat the decision to delay the 2021 ASRC until after the summer recess as a precedent.

Thank you for the opportunity to participate in this year’s Annual Security Review Conference.  While I am pleased that this meeting is occurring as mandated by our Ministers, I regret that it is taking place past the expected schedule.  The United States strongly believes participating States should not treat the decision to delay the 2021 ASRC until after the summer recess as a precedent.

I regret that consensus has not yet been reached on the procedural decisions related to the Human Dimension Implementation Meeting.  It is past time to set the dates for that review meeting, which is also mandated by our heads of state and government to occur annually.

Russia’s ongoing aggression in eastern Ukraine and its occupation of Georgian and Ukrainian territory remain a glaring violation of sovereignty and territorial integrity within the OSCE area.  Earlier this year, we witnessed the largest massing of Russian forces along Ukraine’s eastern border and in Russia-occupied Crimea than at any point since 2014.  Russia failed to provide any substantive response to Ukraine’s legitimate request under paragraph 16 of the Vienna Document for information on Russia’s unusual military activities, and Russia has not adequately explained the reason for its unilateral and irresponsible military buildup.  In Georgia, Russia and its proxies continue to harass, detain, and prevent the free movement of Georgian citizens moving in and out of the Russia-occupied territories of Abkhazia and South Ossetia.

I look forward to our discussions of steps this organization can take to help bring an end to the protracted conflicts in Georgia and Moldova, as well as the Nagorno-Karabakh conflict.  Like the situation in Ukraine, these conflicts have negatively affected the broader Eurasian security environment.  There is more this organization can do to facilitate the resolution of these protracted conflicts.  The increased fighting between Armenia and Azerbaijan in the fall of 2020 was particularly concerning.  Although fighting has stopped, many issues remain unresolved and volatile – underscoring the reality that a comprehensive agreement to address all outstanding issues is essential to reconciliation between Armenia and Azerbaijan and enabling an environment for the people of both countries to live peacefully.  As a Minsk Group Co-Chair, we are committed to helping Armenia and Azerbaijan reach a permanent settlement to the conflict under the auspices of the OSCE Minsk Group Co-Chairs.

Last year, a number of participating States issued a joint statement to advance the idea of strengthening the “conflict cycle” toolbox in 2021 in light of its 10-year anniversary.  This year, the Swedish Chairpersonship and many participating States, including the United States, have sought to advance gender equality and mainstream an inclusive security approach into the work of the OSCE.  We hope to identify action-oriented and concrete steps we could take to make this reality.  This should include integrating a Women, Peace, and Security lens into the toolbox; implementing the Code of Conduct on Politico-Military Aspects of Security with respect to women in the armed forces; working with the Parliamentary Assembly; and addressing the nexus between inclusive security and technology.

I welcome the chair’s inclusion of a special session on the Structured Dialogue on the ASRC agenda.  Earlier this summer, we had an opportunity to discuss threat perceptions in detail at the second meeting of the Structured Dialogue Informal Working Group this year.  The discussion spanned traditional political-military issues, security implications of climate change, and consideration of new threats, including hybrid.  Our discussions further reinforced the widely held view that Vienna Document modernization remains the best tool available to begin to rebuild military transparency.  We hope to see progress towards this end in the run up to the OSCE Ministerial in December.  It is also clear that participating States face a range of cross-dimensional security concerns, including those related to climate change, and the full spectrum of hybrid actions.  The Structured Dialogue should continue to provide a forum for open-ended discussions of real-world threats facing participating States.

As we see, security in the OSCE region is not static.  Russia’s aggression in Ukraine and its occupation of parts of Georgia and Ukraine, the unresolved conflicts over Nagorno Karabakh and Transnistria, as well as the tragic events unfolding in Afghanistan are just some of the challenges we face.  Our OSCE commitments, starting with the Helsinki Final Act, provide a solid framework for our cooperation.  We need to work together, and hold each other accountable, when necessary, in meeting these challenges.

When we met last year, it was still relatively early in the pandemic and we were unsure how COVID-19 developments would impact important OSCE events like the Human Dimension (HDIM) meeting in Warsaw and the Economic and Environmental Forum meeting in Prague, much less the OSCE Ministerial.  If nothing else, the past year has clearly demonstrated the importance of continuing to hold these necessary meetings, whether in person or virtually, to exchange views, hold each other to account, and identify steps we can take to make progress in all three dimensions.

Before I conclude, I would like to say a few words about Afghanistan.  It is vital for all OSCE participating States to deliver messages that we are united that the Taliban uphold commitments they have made on counterterrorism, pursue a stable, peaceful, and inclusive transfer of power, and respect the human rights of all Afghan people.  The United States will be generous in resettling Afghan refugees in our country, but we all need to do more.  We encourage all OSCE participating States to assist refugees, adhere to international humanitarian law, and help transit or temporarily host certain Afghans at risk.  I would like to take a moment to thank those countries that have already stepped up to the plate.  We encourage OSCE field operations to assist their host countries in developing and implementing policies to address influxes of migrants in line with international commitments.

I would like to thank the Swedish Chairpersonship for its leadership.  I look forward to a constructive exchange that reaffirms our shared OSCE values and commitments.  Thank you, Madam Chair.