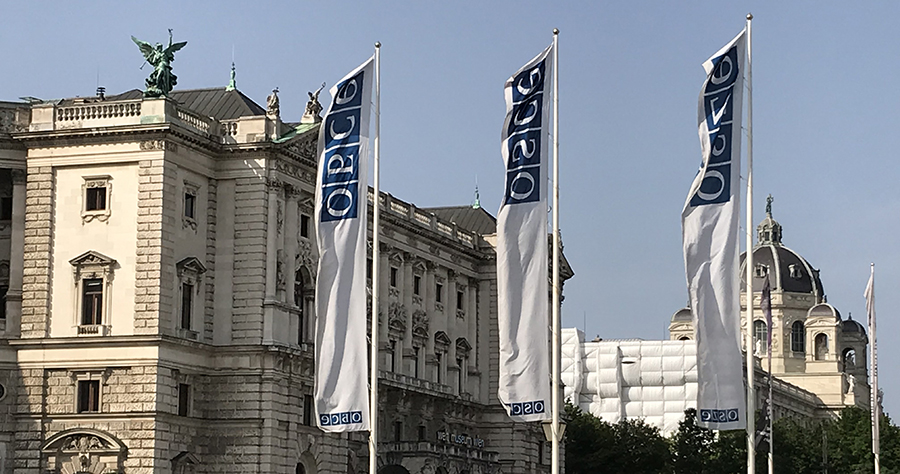 OSCE flags in front of the Hofburg (photo: USOSCE)

Good morning, delegates and distinguished guests. I would like to begin by thanking Ambassador Hasani and the Albanian OSCE Chairmanship, and the Office of the Coordinator for Economic and Environmental Activities for organizing this meeting to oversee our implementation of Second Dimension commitments.

The U.S. National Security Strategy mandates the United States improve its ability to assess the threats and hazards that pose the greatest risks to Americans and prioritize resources based on the highest risks. The size and diverse climate of the United States make it susceptible to a wide range of manmade and natural disasters. We face a daunting task in mitigating risks posed by destructive hurricanes, wildfires, tornadoes, earthquakes, and floods.

Since 1980, the United States has sustained 279 weather and climate disasters, where overall damages/costs reached or exceeded $1 billion. The total cost of these 279 events exceeds $1.8 trillion. Undoubtedly, these numbers would have been substantially higher without adequate planning and preparation or an appropriate response, but we, like other countries, are facing an increasing challenge. The first nine months of 2020 ties the annual record of 16 events—which also occurred in 2011 and 2017—and 2020 is the sixth consecutive year (2015-2020) in which 10 or more billion-dollar weather and climate disaster events have impacted the United States. And the year’s not over yet.

These statistics, along with the toll of lives lost to disasters in the United States, OSCE area, and the world, are stark reminders of the importance for a regional security organization to recall and ensure our commitments on disaster risk reduction are implemented.

In the United States, responsibilities for planning and reducing risk are distributed at the federal, state, and local levels. Under our National Response Framework (NRF), Federal agencies respond to disasters following requests from states and local jurisdictions, and generally include the Federal Emergency Management Agency (FEMA), National Guard,

Abroad, we work through USAID’s Office of Foreign Disaster Assistance (OFDA), which designs its disaster risk reduction programs to fulfill the goals of the Sendai Framework, and which also works with numerous OSCE participating States to build disaster response capacities and confront natural hazards.

We will hear from a senior representative of FEMA this morning, Ms. Camille Crain, Section Chief of FEMA’s Building Resilient Infrastructure and Communities (BRIC) program, regarding her agency’s efforts in these areas to meet our OSCE commitments. These include commitments from the Basel 2014 Ministerial Council decision to (1) adopt an integrated approach to disaster risk management; (2) include climate change adaptation mitigation plans where appropriate; (3) promote the use and sharing of technology; and (4) promote good governance and transparency.

This afternoon, we will also hear from another U.S. speaker, Professor Tricia Wachtendorf, of the Disaster Research Center of the University of Delaware, about the ways in which good governance and transparency function in our national approach to disaster risk reduction.

The United States looks forward to hearing over these two days about best practices, for confirmation that OSCE participating States are implementing their commitments in this important area or what they need to do so, and how the OSCE can help.