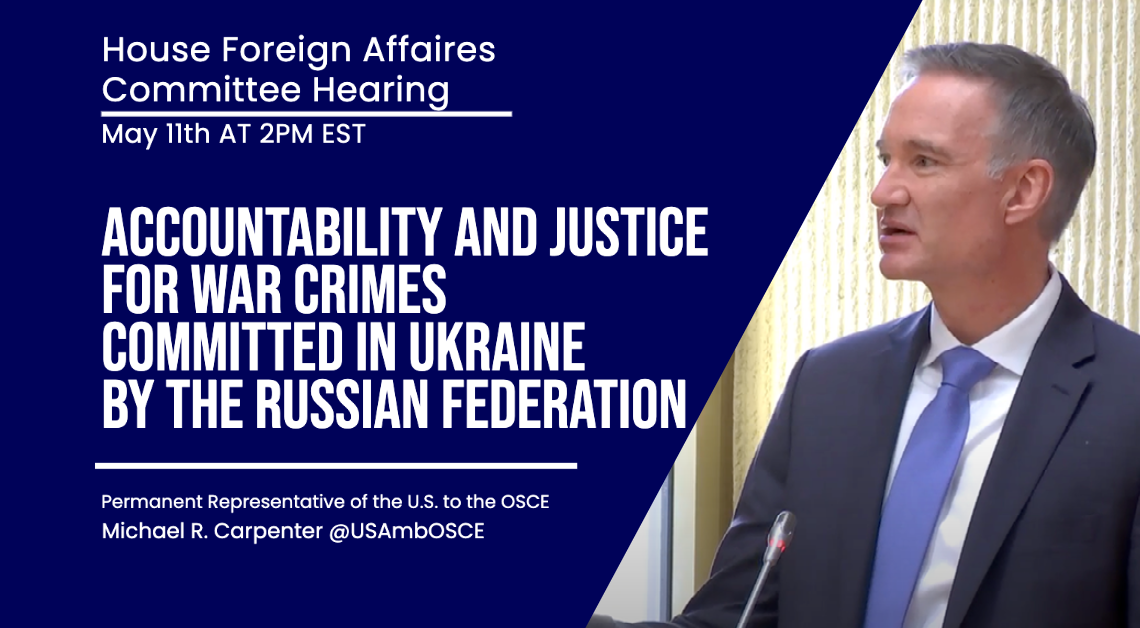 The OSCE has played a unique and important role in documenting the horrific atrocities Russia has committed and continues to commit in Ukraine.

As prepared for delivery by Ambassador Michael Carpenter
to the House Committee on Foreign Affairs Subcommittee on Europe, Energy, the Environment & Cyber
May 11, 2022

Chairman Keating, Ranking Member Fitzpatrick, and distinguished members of the subcommittee: I greatly appreciate this opportunity to appear before you today to testify on the topic of accountability and justice for Russia’s atrocities, including war crimes, in Ukraine.

The OSCE has played a unique and important role in documenting the horrific atrocities Russia has committed and continues to commit in Ukraine.  As some of my colleagues testified last week in the U.S. Helsinki Commission’s hearing on Russia’s War Crimes in Ukraine, one of the OSCE’s most powerful tools is its ability to quickly establish and deploy a fact-finding mission even without the consensus of all the OSCE’s participating States.  On March 3, 45 OSCE participating States – a record majority that included the United States – invoked, with Ukraine’s support, what is informally known as the “Moscow Mechanism,” and in less than two weeks the mission was launched.  It was mandated to examine possible violations and abuses of human rights and violations of international humanitarian law, including war crimes and crimes against humanity.

The mission’s report, released on April 13, covers the first five weeks of the war – from February 24 to April 1 – and documents what might be called the “catalogue of inhumanity” perpetrated by Russia’s forces in Ukraine, including evidence of direct targeting of civilians, attacks on medical facilities, rape, executions, looting, and deportation of civilians to Russia.  The mission found “clear patterns of international humanitarian law violations by Russian forces” and noted that it is “not conceivable that so many civilians would have been killed and injured and so many civilian objects…would have been damaged or destroyed if Russia had respected its international humanitarian law obligations in terms of distinction, proportionality, and precautions.”

The report documents many particularly heinous attacks, such as the March 9 attack striking the Mariupol Maternity House and Children’s Hospital, determining that, based upon Russia’s own statements about the strike, “the attack must have been deliberate.” The mission concluded that no effective warning was given, and that the strike constitutes a “clear violation” of international humanitarian law and a war crime.  While the Russian government alleged the hospital was used for military purposes, the mission categorically dismissed these claims.

Similarly, the mission found that the March 16 attack on the drama theater in Mariupol that killed approximately 600 people was “most likely” an egregious violation of international humanitarian law and that those who ordered or executed it committed a war crime.

The report powerfully chronicles cases of Russia’s forces arresting civilians, including journalists, without any procedure, and ill-treating them by methods that amount to torture.  It also cites evidence showing that Russia’s forces engaged in a “widespread and systematic pattern” of damage to Ukrainian healthcare facilities with attacks on 52 facilities between February 24 and March 22 by “indiscriminate bombardment and in some cases intentional targeting,” noting that these strikes too constitute war crimes.

Since the period covered in the report, the scale of atrocities committed by Russia’s forces in Ukraine has dramatically expanded.  Russia has continued its campaign of utter destruction in Mariupol and has launched a renewed offensive in Ukraine’s east and south.  Tens of thousands of civilians are feared dead in Russia’s barbaric siege of Mariupol.  Liberated areas around Kyiv and Kharkiv have revealed evidence of mass killings and widespread sexual violence committed by members of Russia’s forces against civilians.  Russia appears to be intensifying its ongoing forced transfers and deportations of local populations from Mariupol and other regions of Ukraine to Russia or Russia-controlled parts of the Donbas through so-called “filtration camps” – and truly abominable practice that harkens back to an era we all thought we would never see again.

Liberated areas around Kyiv and Kharkiv have revealed evidence of mass killings and widespread sexual violence committed by members of Russia’s forces against Ukrainian civilians.  And further credible reports are mounting that Russia is further abducting, torturing, and/or murdering locally elected leaders, journalists, and civil society activists, as well as religious leaders in the areas under its control.

It is increasingly clear that Russia’s war is an attempt to suppress Ukrainian identity and culture.  Moscow appears to be planning to attempt to forcibly annex the so-called Donetsk and Luhansk “people’s republics” in the coming weeks or months and considering a similar operation for the Kherson region.  In areas under its control, Russia has forced schools to switch to a Russian Federation curriculum and has put the Russian ruble into general use.  It has also started changing the names of towns and villages in areas it controls, as well as changing street signs from Ukrainian to Russian.  Russia’s military campaign is underpinned by continuous, dehumanizing propaganda deployed on a repeat loop by Russian government officials and state-run or state-controlled media that deny Ukraine is historically or culturally distinct from Russia or that it has the right to exist as a sovereign, independent nation-state.

Mr. Chairman and members of the subcommittee, thanks to the support of the United States and like-minded nations, the OSCE’s highly regarded Office for Democratic Institutions and Human Rights (ODIHR) is already on the ground in Ukraine and neighboring countries researching and documenting the most serious violations of human rights and international humanitarian law to help ensure accountability.  We continue to explore ways we can leverage the OSCE to support Ukraine and the Ukrainian people alongside other international efforts to ensure accountability, including another potential invocation of the Moscow Mechanism.

We are committed to using every available tool to ensure Russia is held accountable for its monstrous atrocities. Thank you, Mr. Chairman.  I look forward to answering any questions.

The full hearing can be viewed here:https://www.youtube.com/watch?v=KTPorNuO2vo