Home Home | News & Events | Statement at HDIM: Any Other Business 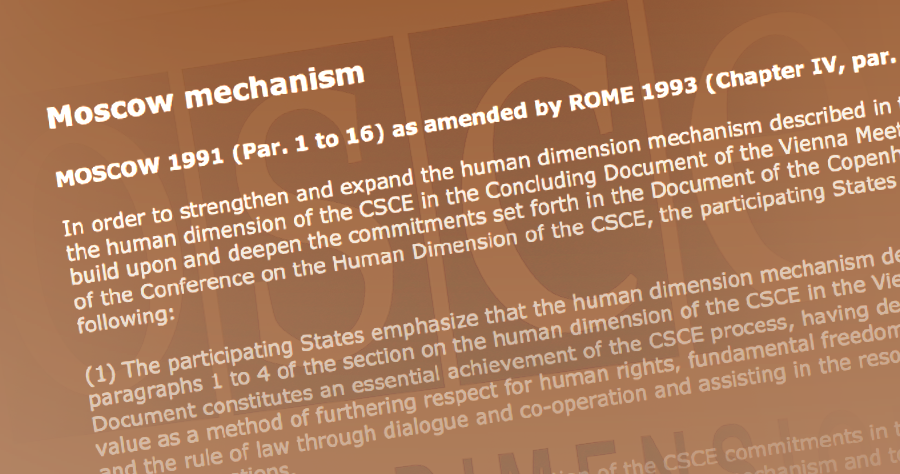 Statement at HDIM: Any Other Business

As prepared for delivery by Director Michael Murphy
Warsaw
September 22, 2017

We regret that Turkmenistan did not participate this year. However, almost fifteen years after the invocation of the Moscow Mechanism, we continue to lack adequate information on many individuals who have been arrested by authorities only to disappear, with no accounting for their fate or whereabouts.

As we heard from NGOs during this meeting, there are now at least 112 documented cases of such individuals whose fate is still unknown– including former OSCE Ambassador and Foreign Minister Batyr Berdiev and former Foreign Minister Boris Shikmuradov. We were moved by the poems written in prison by Berdiev, and unveiled here at the HDIM. It is feared that many of those who have disappeared have been subjected to torture and abuse, or a worse fate. Their families have no information on their whereabouts or their health, or whether they are dead or alive.

We call on Turkmenistan to allow access to these prisoners, by their families, lawyers, and international observers, such as the ICRC. In 2005, Foreign Minister Meredov wrote to U.S. officials that, “all places of detention are open to visits by the representatives of the international organizations and foreign diplomats, and they are given free access to all convicted persons in accordance with international rules.” We urge Turkmenistan to make good on this promise and allow us to visit these prisoners or provide concrete information if they are no longer alive.

The Prove They Are Alive! Campaign reported that six individuals from their list have died in the past 18 months. This issue remains urgent: as we heard here, people continue to be arrested and incarcerated without information or access.

Turkmenistan has committed itself to “ensure that all individuals in detention or incarceration will be treated with humanity,” and to “observe the U. N. Standard Minimum Rules for the Treatment of Prisoners as well as the U. N. Code of Conduct for Law Enforcement Officials.”

The Moscow Mechanism was also used with Belarus as a result of the crackdown following the 2010 elections. We regret that Belarus refused to cooperate with the fact-finding mission.

This year, Belarus hosted the annual OSCE Parliamentary Assembly meeting. We welcome the fact that civil society representatives were able to meet freely with parliamentarians during the meeting. However, we are troubled by the mass detentions that occurred in connection with the nationwide demonstrations in March, including that of journalist Halina Abakunchyk –one of 32 journalists arrested while covering the protests.

We urge Belarus: to restore civil and political rights to those detained in contravention of their Principle VII right to know and act upon their human rights commitments; to register political parties; to register the civil society organizations; and to engage with the OSCE on additional electoral reform as recommended by the Election Observation Mission.