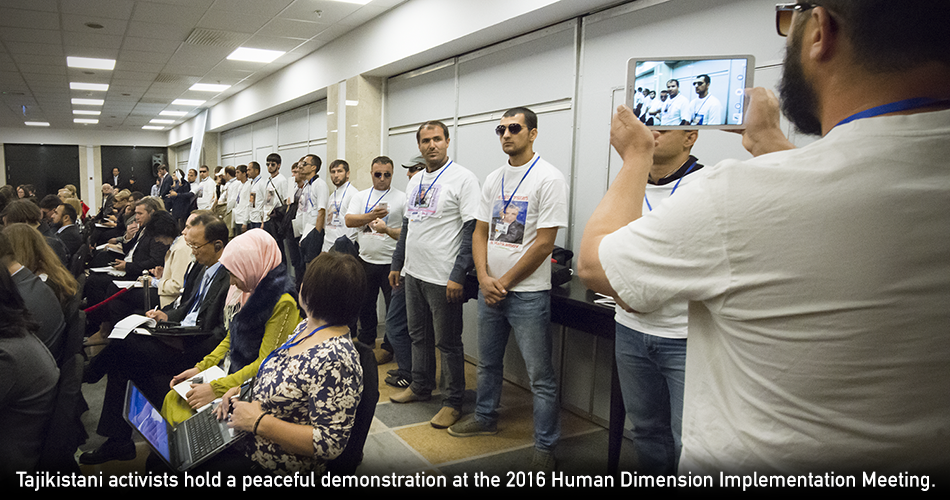 No confident government would be frightened by a human rights defender. So what do crackdowns on activists by certain OSCE governments tell us?

At the 2016 HDIM, taking place now in Warsaw, we’ve been speaking out against what we call the ‘shrinking space’ for civil society in many parts of the OSCE region.

Civil society activists perform a vital role in democracies, holding power to account and coming up with new ideas for how to improve our societies.

But whether its journalists jailed for exercising freedom of expression in Azerbaijan, whether it’s Tajikistan’s authorities retaliating against family members of HDIM participants, or whether it’s Russia stigmatizing organizations as “foreign agents” without any evidence whatsoever that these organizations take direction from abroad, too many OSCE governments are finding ways to prevent activists doing their work.

“You cannot stop movements for accountability by blaming foreign interference, because the life force of such movements in all our countries is coming from within, not without,” said Tom Malinowski, Assistant Secretary for Democracy, Human Rights, and Labor, in the U.S. opening statement at the HDIM. “All you will do is to reveal your own insecurity and weakness.”

Not only will they show their insecurity and weakness: they are hurting and disrespecting their people – as Russia so clearly has done in cracking down on citizens’ groups dedicated to such allegedly dangerous pursuits as fighting torture, educating about HIV/AIDS, and even protecting migratory birds – and putting our common security at risk too.

Really powerful to have Gennady Afanasiev here to give personal testimony of his time as political prisoner in Russia. #HDIM2016 pic.twitter.com/SOMQI13BR4

Which is why the U.S. will continue to support civil society across the region, and look for ways to protect their space to work.

It’s time for certain governments around the region to show strength and do so too.