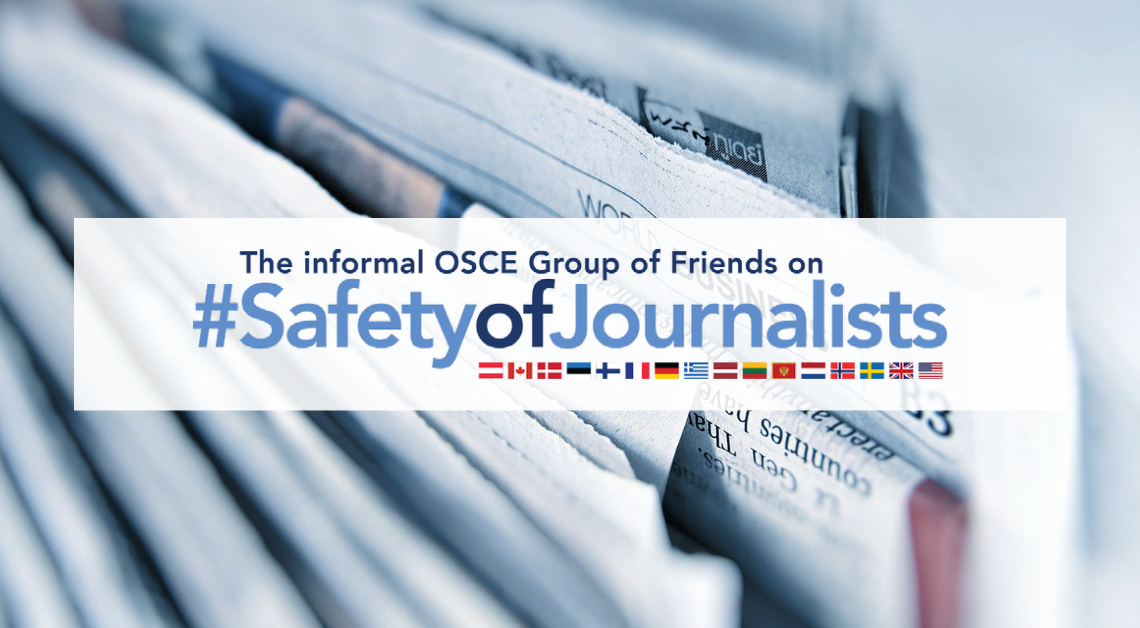 OSCE Group of Friends on Safety of Journalists

As delivered by Ambassador Jeroen Boender, Permanent Representative of the Kingdom of the Netherlands

On behalf of the informal OSCE Group of Friends on Safety of Journalists, composed of the following participating States: Austria, Canada, Denmark, Estonia, Finland, France, Germany, Greece, Latvia, Lithuania, Montenegro, the Netherlands, Norway, Sweden, the United Kingdom, and the United States of America, I would like to deliver the following statement in response to the second report of the OSCE Representative on Freedom of the Media Ms. Teresa Ribeiro to the Permanent Council.

I would like to welcome the Representative on Freedom of the Media back to the Permanent Council and thank Ms. Ribeiro for her report.  Throughout the reporting period, she did an excellent job keeping the topic of the safety of journalists high on the OSCE agenda.

The Ministers of our 57 countries agreed in Milan in 2018 about the importance of safeguarding the work of journalists, which unfortunately places both them and their family members at risk of violence, harassment, and intimidation.  In Milan, all of us committed to take action to enhance the safety of journalists.

Unfortunately, as your report shows all too well, Ms. Ribeiro, not all of the participating States have lived up to their commitments to protect journalists.  In the six months since you last addressed us, we have seen journalists and other media actors face killing, torture, enforced disappearance, arbitrary arrest, detention, and expulsion, harassment, and intimidation.  While the situation is worrying in many participating States, we want to pay particular attention today on Belarus, due to the far-reaching and systematic crackdown on freedom of expression there ever since the fraudulent presidential elections in August 2020 new outrages are being committed at an alarming rate.  The Group of Friends appreciates your continued attention to the situation in Belarus.

We would also take note that members of the Group of Friends have been the subject of Ms. Ribeiro’s attention both in her report today and since she last appeared before the Permanent Council.  Independent media is a cornerstone of free and democratic societies and helps safeguard human rights and fundamental freedoms.  As such, we welcome the reports from the RFoM about potential areas of concern within our own states just as much as her statements on fellow participating States.  It gives us a chance to take any needed corrective measures and ensure that we are fulfilling our OSCE commitments and international law obligations.  Additionally, it stands as proof of the RFoM’s independence and impartiality, two aspects of her mandate which should be protected at any cost.

We remain deeply concerned by the targeting of women journalists, online and offline, and thankful to the RFoM and her staff for their continued focus on this important issue.  Many women journalists face multiple and intersecting forms of discrimination and gender-based violence, including due to race, religion, ethnicity, sexual orientation, or gender identity.  We applaud the RFoM’s efforts to promote protection of women journalists and to provide resources to both states and civil society to help raise awareness about the topic.

Ms. Ribeiro, thank you again for your second report and for the work you and your office do on a daily basis to promote media freedom and protect the work of journalists throughout the OSCE region.  Please know that the Group of Friends remains committed to working with you and with other participating States to focus attention on the implementation of our common commitments on the safety of journalists.