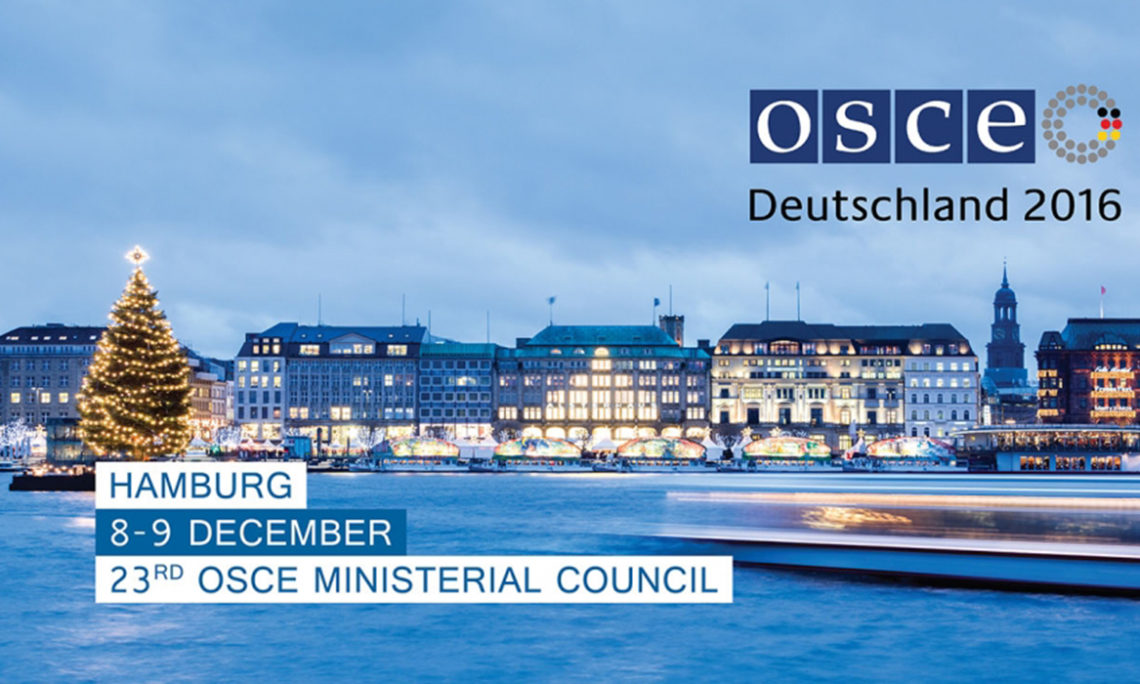 The 23rd Meeting of the OSCE Ministerial Council will be held in Hamburg on 8 and 9 December 2016. (www.mediaserver.hamburg.de/Jörg Modrow)

On December 8 & 9, foreign ministers from across the OSCE region will meet in Hamburg, Germany, for what’s known as the OSCE Ministerial Council.

In its strictest sense, the OSCE ‘Ministerial Council’ describes any occasion OSCE foreign ministers convene to discuss and decide on OSCE issues. In practice, the Ministerial Council assembles once a year in the country acting as the OSCE’s Chair-in-Office, towards the end of that country’s period as Chair.

Also invited to speak to the Ministerial Council plenary session are ministers from the OSCE’s Partners for Cooperation, so, with upwards of 70 statements, the opening plenary lasts well into the second day of the meeting.

But the Ministerial Council is more than a series of statements.

Foreign ministers and senior government officials also use the opportunity to meet bilaterally and in groups, thematic ‘side events’ take place on the margins, and, immediately before the Ministerial Council meeting, human rights activists gather and develop recommendations to present to the incoming OSCE Chairperson-in-Office.

Behind the scenes, the Ministerial Council is also alive with activity, as delegates from OSCE countries negotiate the wording of Ministerial Decisions and Declarations.
OSCE decisions and declarations can be said to serve two functions. They:

But reaching new agreements is not easy.

First, it is essential that we maintain existing standards. New texts must not lower the bar, especially when it comes to issues of ensuring our common security by protecting and defending human rights and fundamental freedoms.

Furthermore, the OSCE is a consensus organization, meaning decisions and declarations can only be adopted if all 57 participating countries agree to every word.

Therefore, although negotiations actually begin weeks before the Ministerial Council assembles, not all texts end up being adopted before the gavel strikes signaling the end of the meeting.

But this shouldn’t be perceived as a weakness: when OSCE countries do reach agreement, we do so with unanimity — making these commitments politically binding, and leaving no excuse for any government not to stick to its word.

It is the decisions and declarations made at the OSCE Ministerial Council, along with the body of OSCE agreements reaching back to the organization’s inception, that shape the OSCE’s work, make the sum of our OSCE commitments and, as such, form the foundation of our concept of comprehensive security.