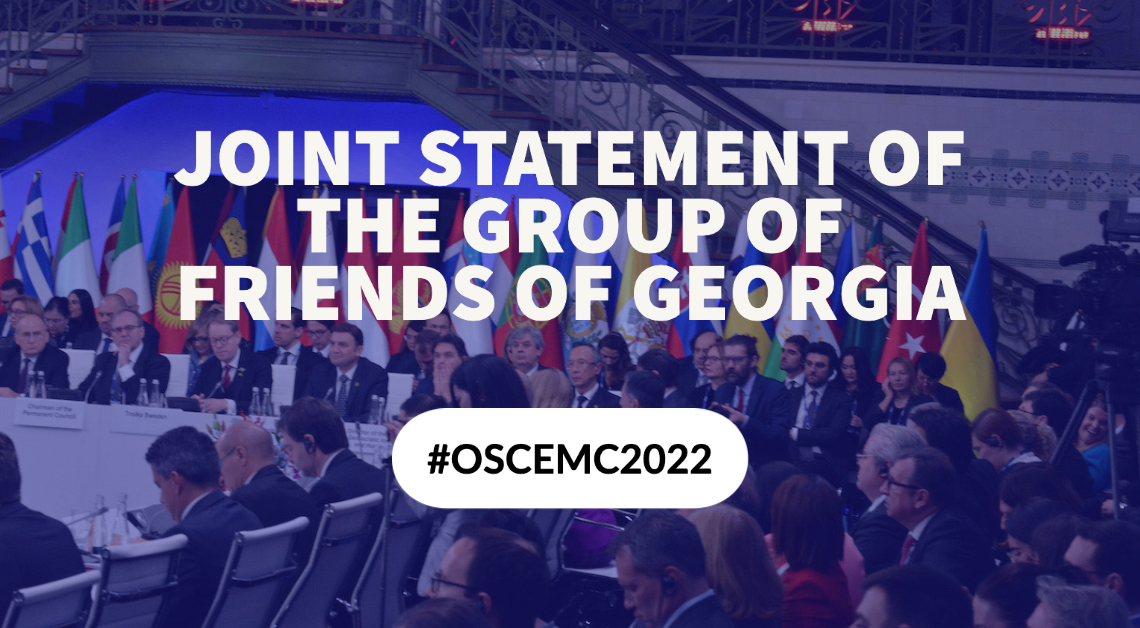 #OSCEMC2022: Joint Statement of the Group of Friends of Georgia

As delivered by the Permanent Representative of Georgia to the OSCE
to the Ministerial Council, Lodz, Poland
December 2, 2022

2. We reaffirm our full support for Georgia’s sovereignty and territorial integrity within its internationally recognised borders.

4. Fourteen years since the Russian Federation’s military invasion of Georgia, we remain deeply concerned over the continued occupation of parts of the territory of Georgia and underline the need for the peaceful resolution of the conflict based on full respect for international law and commitments, including the UN Charter and the Helsinki Final Act.

5. We welcome Georgia’s compliance with the EU-mediated 12 August 2008 ceasefire agreement. We call upon Russia to fulfil immediately its clear obligation under the ceasefire agreement to withdraw its forces to pre-conflict positions, as well as its commitments to allow unfettered access for the delivery of humanitarian assistance and not to impede the creation of international security arrangements on the ground. We call upon Russia to reverse its recognition of the so-called independence of Georgia’s Abkhazia and South Ossetia regions.

6. We condemn Russia’s actions, which appear intended to unilaterally establish the Georgia-Russia state border on the segments of the occupied territories and incorporate a part of Aibgha village of Georgia into Krasnodar Krai. In the same vein, we express concern over Russia’s seizure of 180 hectares of land in the Gagra district of Abkhazia, Georgia. We are also concerned with ongoing activities within the framework of implementation of the so-called “programme” on creation of a common socio-economic space between the Russian Federation and the Abkhazia region of Georgia as well as the so-called agreement on dual citizenship with the South Ossetia region of Georgia, as another step toward attempted illegal annexation. We urge Russia to reverse this process. We condemn the holding of so-called parliamentary elections in Abkhazia region as well as so-called presidential elections in South Ossetia in 2022 as a blatant violation of Georgia’s sovereignty.

7. We note the January 2021 judgment of the European Court of Human Rights in the case concerning the armed conflict between the Russian Federation and Georgia in August 2008 and its consequences, including its findings that Russia has exercised effective control over Georgia’s regions of Abkhazia and South Ossetia following the 12 August 2008 ceasefire agreement, including through its military presence. The Court also ruled that Russia, in violation of the European Convention on Human Rights, tortured Georgian Prisoners of War; arbitrarily detained and killed Georgian civilians, and was responsible for their inhuman and degrading treatment; prevented the return of ethnic Georgians to their homes; and failed to conduct investigations into killings of civilians. We call on Russia to fully comply with the judgment, including by allowing internally displaced persons (IDPs) to return to their homes in safety and dignity. We also note the decision of the International Criminal Court (ICC) of June 2022 that issued arrest warrants for alleged war crimes committed during Russia’s invasion in 2008. We call on Russia to cooperate with the ICC.

8. We are concerned over the continuous discrimination against Georgians on the grounds of ethnicity in Georgia’s Abkhazia and South Ossetia regions and abuses, including severe restrictions on rights related to freedom of movement, education, residence and property, particularly in connection with the destruction of the houses of IDPs. We call on those in control to enable full and unhindered access by international human rights organisations to the Georgian regions of Abkhazia and South Ossetia. We condemn the decision to replace instruction in the Georgian language with Russian in schools of the ethnic-Georgian-inhabited Gali and Akhalgori districts in the Abkhazia and South Ossetia regions of Georgia, respectively. We also condemn the obliteration and alteration of Georgian features from the Georgian cultural heritage monuments in both regions.

10. Isolation and continuous restrictions on freedom of movement have destabilised the situation on the ground and severely impacted the security, safety, well-being, and humanitarian conditions of civilians in conflict-affected areas, particularly in Akhalgori district, where reports suggest the local population suffers from shortages of medicine and food, and is denied access to pensions and essentials, including the free healthcare services available in Georgian Government controlled territory. This creates a risk for further depopulation of the Akhalgori district.

11. We remain deeply concerned by ongoing arbitrary detentions around the ABLs and call for the immediate and unconditional release of Irakli Bebua and all those under arbitrary detention. We condemn the detentions of Kristine Takalandze, Asmat Tavadze, Mamuka Chkhikvadze and Kakhaber Natadze.

12. We condemn the killing of Georgian citizens Archil Tatunashvili, Giga Otkhozoria, and Davit Basharuli, and urge Russia to remove any obstacles to bringing the perpetrators to justice. In this context, we reiterate our support for Georgia’s preventive steps aimed at eradicating impunity and note the Otkhozoria-Tatunashvili List adopted by the government of Georgia.

13. We support the Geneva International Discussions (GID), as an existing format with the Russian Federation to address fulfillment of the EU-mediated 12 August 2008 ceasefire agreement, as well as the security, human rights, and humanitarian challenges stemming from the unresolved Russia – Georgia conflict. We underline the necessity of progress on the core issues of the discussions, including on the non-use of force, establishing international security arrangements in Georgia’s Abkhazia and South Ossetia regions and ensuring the safe, dignified, and voluntary return of IDPs and refugees in accordance with international law. We strongly support applying the Women, Peace and Security agenda in the GID in order to facilitate inclusive and sustainable peace and security on the ground.

14. We express our support for the Incident Prevention and Response Mechanisms (IPRMs) in Ergneti and Gali and emphasise that the six meetings were held in Ergneti in 2022. The IPRMs can play important role in preventing the escalation of the conflict and in helping to protect the safety and security of people on the ground. We express our great concern over the lengthy suspension of the Gali IPRM and urge its resumption without further delay or pre-conditions, in line with the ground rules.

15. We reaffirm our unwavering support for the EU Monitoring Mission (EUMM) and call upon Russia to allow the EUMM to implement its mandate in full, including by enabling the EUMM’s access on both sides of the ABLs.

16. We welcome the multi-stakeholder process for developing a comprehensive “State Strategy for de-occupation and peaceful conflict resolution” by the government of Georgia, as well as the strategic review of the reconciliation and engagement policy. We support the Georgian government’s ‘A Step to a Better Future’ peace initiative, aimed at improving the humanitarian and socio-economic conditions of people residing in Georgia’s Abkhazia and South Ossetia regions and at fostering confidence building among divided communities. We urge active work on reconciliation and engagement programs and stand ready to support.

17. We encourage the OSCE’s engagement in the process of finding a peaceful resolution to the Russia-Georgia conflict. We regret that due to Russia’s refusal to join consensus, the mandate of the OSCE mission to Georgia was discontinued in 2009. We encourage the OSCE Participating States to decide on the reopening of the OSCE cross-dimensional mission in Georgia, including with a monitoring capacity that would enable the mission to operate without restrictions across the ABLs. The reopening of the mission would strengthen considerably the OSCE’s engagement in the GID and IPRMs. Furthermore, re-establishment of a field mission would support OSCE’s work in every phase of the conflict cycle.

18. The Group of Friends of Georgia will continue to raise awareness of the conflict and of developments on the ground, hold Russia accountable for its obligations and commitments, and advocate for the conflict’s peaceful resolution.