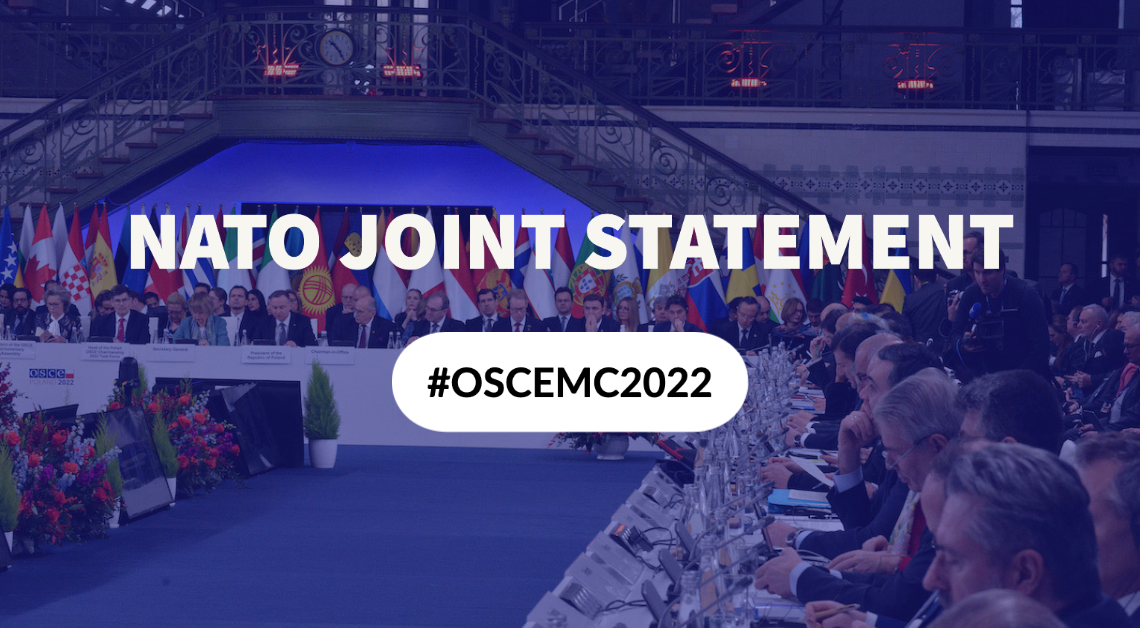 The OSCE area is not at peace. Russia’s war of aggression against Ukraine, which we condemn in the strongest possible terms, gravely undermines international security and stability.

As delivered by the Permanent Representative of Croatia to the OSCE
to the Ministerial Council, Lodz, Poland
December 2, 2022

1. The OSCE area is not at peace. Russia’s war of aggression against Ukraine, which we condemn in the strongest possible terms, gravely undermines international security and stability. It is a blatant violation of international law, including the UN Charter, and contravenes the founding principles of the Helsinki Final Act, and other OSCE commitments.

2. We stand in full solidarity with the people and the Government of Ukraine in their heroic defence of their country. We reiterate our unwavering support for Ukraine’s independence, sovereignty, and territorial integrity within its internationally recognised borders extending to its territorial waters. We condemn and will never recognize Russia’s illegal and illegitimate attempted annexation of Ukrainian territories, including Crimea. We fully support Ukraine’s inherent right to self-defence and to choose its own security arrangements. We will continue to provide the comprehensive support to Ukraine for as long as it takes.

3. Russia has caused immense human suffering and massive displacements, disproportionately affecting Ukraine’s women and children. Russia bears sole responsibility for this humanitarian catastrophe. We praise the courage and resilience of the people of Ukraine. We fully support the work of the international community – including use of OSCE tools and initiatives such as invocations of the Moscow Mechanism and ODIHR monitoring – to hold accountable all those responsible for violations of international humanitarian law and abuses of international human rights law in Ukraine. We particularly condemn Russia’s attacks on civilians and civilian infrastructure and conflict-related sexual violence. In this context we underline the relevance of the Women, Peace and Security Agenda to OSCE’s work. We deplore Russia’s obstruction and undermining OSCE’s work, especially vis-à-vis the closure of its Ukraine-related field presence, which makes the implementation of the Support Programme for Ukraine even more urgent.

4. We are also concerned by the increasingly bellicose rhetoric and actions of Belarus. It must abide by international law and stop its complicity in Russia’s illegal war

5. Russia is the most significant and direct threat to our peace, security and stability. It seeks to establish spheres of influence and direct control through coercion, subversion, disinformation, aggression and illegal attempted annexations. Russia’s military build-up, including in the Baltic, Black and Mediterranean Sea regions and the High North, along with its military integration with Belarus challenges our security. Russia’s posture, disinformation and dangerous nuclear rhetoric, as well as its proven willingness to use force to pursue its political goals undermine the rules-based international order.

6. We do not seek confrontation and we pose no threat to Russia. We will continue to respond to Russia’s threats and hostile actions in a united and responsible way. We will significantly strengthen deterrence and defence, enhance our resilience against Russia’s coercion and support our partners to counter malign interference and aggression.

7. Russia has instigated conflicts in the OSCE area and inhibited efforts to resolve them. This is most recently evident in its further invasion of Ukraine. We call on Russia to end its occupation of Georgia’s regions of Abkhazia and South Ossetia and withdraw all the forces and materiel it has stationed in Georgia and the Republic of Moldova without their consent. We firmly support their sovereignty, independence, and territorial integrity within their internationally recognized borders.

8. We call on Russia to cease its aggression and violations of international law and contravention of principles and commitments of the OSCE in all three dimensions of security encompassed in the Helsinki Final Act, including those relating to arms control, transparency, confidence and security building measures, respect for human rights and fundamental freedoms, and democratic governance, which are essential to advance friendly relations and cooperation among States. We reiterate the key importance of the OSCE as a unique forum for dialogue on comprehensive security.

9. In conclusion, we call on Russia to immediately stop its war of choice and fully and unconditionally withdraw from Ukraine.

10. The participating States subscribing to this statement request its inclusion in the Journal of this ministerial meeting.