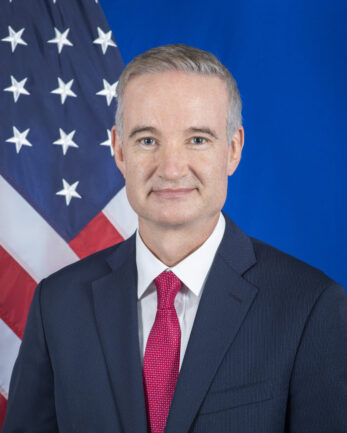 Ambassador Michael Carpenter was nominated by President Biden to serve as the Permanent Representative of the United States of America to the Organization for Security and Cooperation in Europe, and was confirmed by the United States Senate on November 3, 2021, by unanimous consent.

Prior to assuming his current position, Dr. Carpenter was the Managing Director of the Penn Biden Center for Diplomacy and Global Engagement at the University of Pennsylvania. From 2015-17, Dr. Carpenter served in the Pentagon as Deputy Assistant Secretary of Defense for Russia, Ukraine, Eurasia, and Conventional Arms Control. Previously, he worked in the White House as a foreign policy advisor to then-Vice President Biden and as Director for Russia at the National Security Council. Prior to his White House jobs, Carpenter was a career Foreign Service Officer with the State Department, where his roles included Deputy Director of the Office of Russian Affairs, Special Assistant to the Under Secretary for Political Affairs, Political-Military Officer, and Advisor on Caucasus Affairs and Regional Conflicts. He served overseas in the U.S. Embassies in Poland, Slovenia, and Barbados.

During his State Department career, Ambassador Carpenter received four Superior Honor Awards and three Meritorious Honor Awards. For his academic work, he received fellowships from the Fulbright Foundation, the International Research & Exchanges Board, the American Council of Learned Societies, and the John D. and Catherine T. MacArthur Foundation.

Ambassador Carpenter holds a bachelor’s degree in International Relations from Stanford University a master’s degree and Ph.D. in Political Science from the University of California at Berkeley. He speaks fluent Polish and Slovenian, as well as some German, French, and Czech. He enjoys skiing, hiking, watching movies, and traveling with his family. 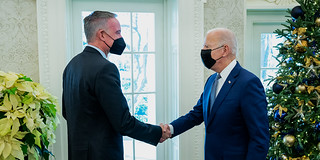