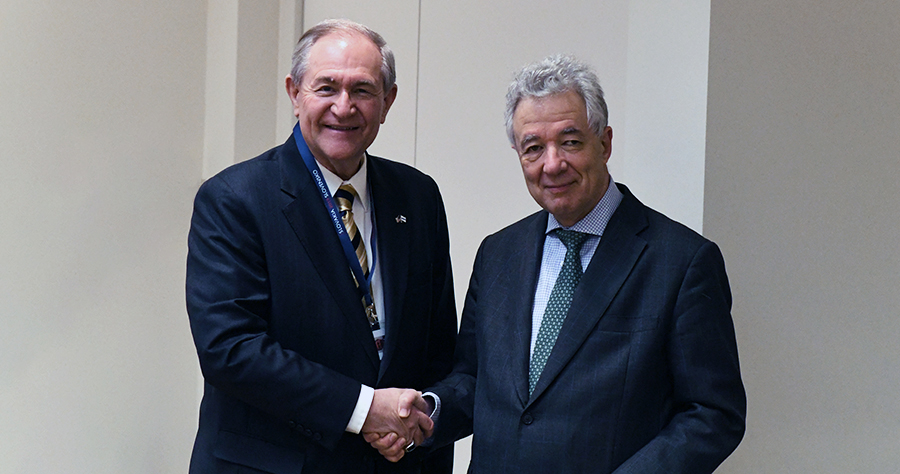 Vienna, January 16, 2019 – “If we can help to end just one of the unresolved conflicts in Europe, we can contribute greatly to improving security in the region,” Ambassador James Gilmore, the United States’ top representative to the Organization for Security and Cooperation in Europe (OSCE), told the OSCE Albanian Chairmanship’s newly appointed Special Representative for the settlement process for the Transnistrian conflict in Moldova, Ambassador Thomas Mayr-Harting in a meeting on January 15. “The legacy of the Soviet Union has left countries divided, with territories under the control of criminals and thugs. It’s time to reinvigorate our efforts to diplomatically and permanently resolve these issues, which have dragged on for decades,” Ambassador Gilmore said.

International mediators, led by the OSCE, continue to help the central government of Moldova and the breakaway Transnistrian region work out a settlement agreement. As Special Representative, Ambassador Mayr-Harting is the Albanian Chairmanship’s envoy to the settlement talks on the Transnistrian conflict, known as the 5+2 process. Ambassador Gilmore welcomed Ambassador Mayr-Harting’s appointment, and looked forward to future cooperation. “The United States is an observer to the 5+2 settlement process. I believe we should look for opportunities to provide as much support as possible to parties to the conflict.” To this end, the United States fully supports Moldova’s sovereignty and territorial integrity within its internationally recognized borders, and with a special status for Transnistria.

Since the hostilities in the early 1990s, Russia continues to have troops and weapons in Moldova. Ambassador Gilmore said, “the United States stands ready to work with the OSCE on the destruction and removal of Russian ammunition and armaments at the Colbasna weapons depot, to ensure Russia’s full compliance with commitments Moscow took at the OSCE’s Summit in 1999 in Istanbul, including the withdrawal of its troops.”

James S. Gilmore III, Permanent Representative of the U.S. Mission to the Organization for Security and Cooperation in Europe, was sworn in as Ambassador on June 25, 2019. He was Virginia’s 68th Governor from 1998-2002. With his appointment of a former Governor, President Trump demonstrates the strong U.S. commitment to strategic multilateral engagement as well as peace and security throughout Europe and Eurasia. Ambassador Gilmore has dedicated much of his career to public service, serving in the U.S. Army, as a county prosecutor, and as Virginia’s Attorney General. He holds undergraduate and law degrees from the University of Virginia.