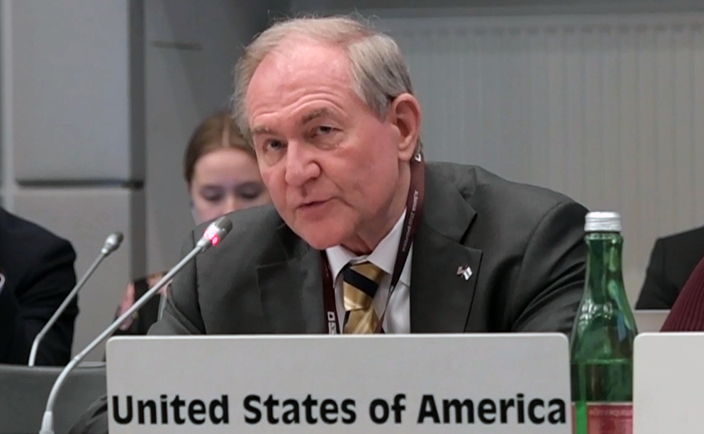 Vienna – Speaking at the Organization for Security and Cooperation in Europe on January 30, U.S. Ambassador James Gilmore lambasted persistent Russian efforts to create an alternative narrative of what was taking place in eastern Ukraine.  “For the past few months in particular, our Russian colleagues have asserted that the members of this Council are somehow confused about what is happening in eastern Ukraine.  They allege that we ignore the ‘real facts,’” Gilmore stated.

Russia persists in maintaining this false narrative despite the fact that the majority of OSCE participating States don’t agree with its version. “Whereas the overwhelming majority of the participating States here have a clear, consistent, and common understanding of the situation in eastern Ukraine, Russia instead remains engrossed in a completely divergent chronicle,” the Ambassador said.

Among the reasons for the Russian obfuscation is an attempt to try and distance themselves from the conflict.  “They present a picture far removed from the reality on the ground.  Russia claims that the conflict that Moscow started and sustains by sending its forces and materiel across the border into Ukraine is an ‘internal’ one,” Gilmore stated.

“We recognize that this process is complex and will take time and political will.  We cannot accept, however, Russia’s distortion of the truth.  Progress in the Trilateral Contact Group and the Normandy Quartet does not alter the fact that the situation on the ground in eastern Ukraine remains dangerous and volatile,” Gilmore concluded.