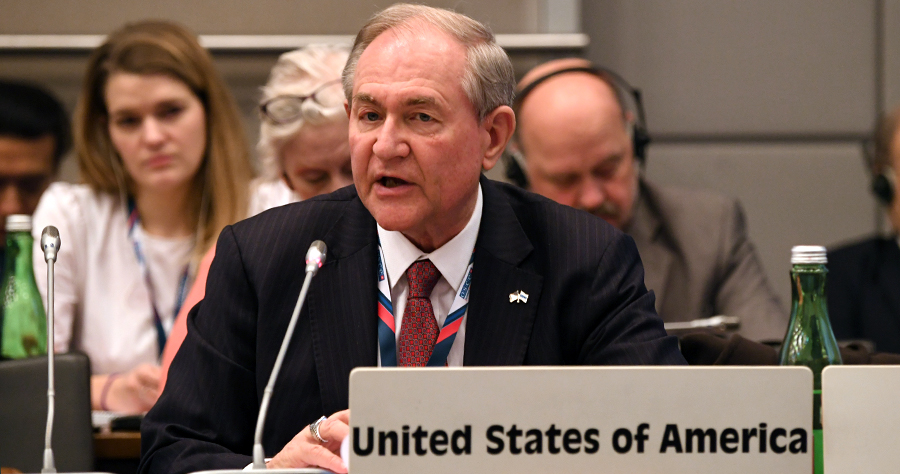 Vienna, January 16, 2020 – U.S. Permanent Representative to the Organization for Security and Cooperation in Europe (OSCE) James S. Gilmore III today criticized Russia’s mistreatment of Ukrainian prisoners who, according to a December 2019 UN report, had suffered from “electroshocks, threats of sexual violence, suffocation, and beatings.”  The prisoners in question had been released as part of a September detainee exchange between Russia and Ukraine.  “I fear that the dozens of Ukrainian political prisoners Russia still holds may be experiencing the same severe mistreatment,” Gilmore assessed.  He called on Russia to release the prisoners and return them to their homes and families.

Ambassador Gilmore then highlighted the case of Oleh Prykhodko, a Ukrainian citizen who peacefully had exercised his right to free expression by protesting the Russian occupation.  In retaliation, Russian authorities jailed Prykhodko on “terrorism” charges and recently extended his detention through February.

As he highlighted the ongoing abuse of prisoners by Russian authorities, Ambassador Gilmore called on Russia to direct its proxies to stop harassing members of the OSCE’s Special Monitoring Mission (SMM) to Ukraine.  In addition to their restricting SMM monitors’ movement, Gilmore cited several instances of proxies’ jamming or firing at the Mission’s UAVs.

The Ambassador urged all sides to prioritize the safety and security of the monitors.  “Since the SMM constitutes our, and indeed the world’s, eyes and ears on the ground in eastern Ukraine, providing for its needs should be a priority for all delegations,” Gilmore concluded.