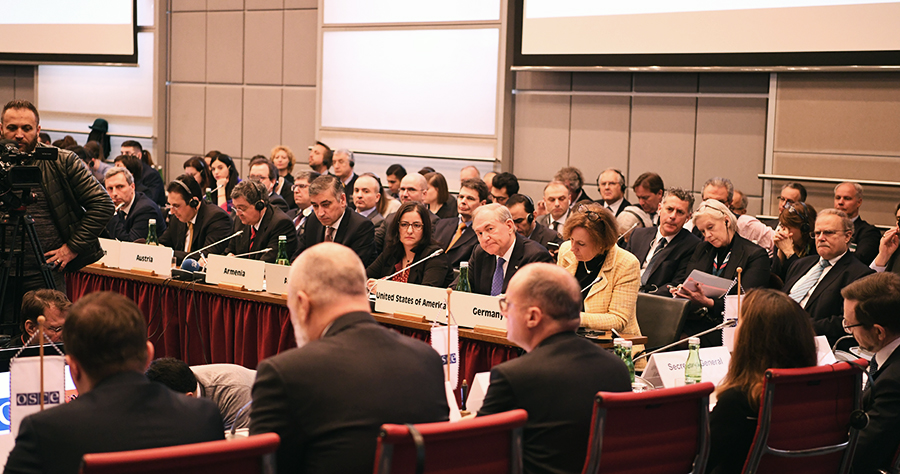 U.S. Permanent Representative to the Organization for Security and Cooperation in Europe (OSCE) Ambassador James S. Gilmore III addressed the OSCE’s Permanent Council on January 9 to explain to the representatives of 57 participating States and a dozen Partners for Cooperation the defensive actions taken recently by the United States against Iranian aggression.  “Only after repeated warnings to the Iranian regime—both public and private—to cease its targeting of U.S. persons and interests, did President Trump take action to defend American lives,” Gilmore explained.

At the opening session of the Albanian chairmanship of the OSCE, Ambassador Gilmore thanked Chairman-in-Office and Albanian Prime Minister Edi Rama for his country’s rejection of Iran’s campaign of terror against American interests. “At the outset, I wish to commend Albania for its strong statement of support January 3 and its forceful rejection of Iran’s campaign of violence and terrorism against Americans and U.S. interests.  This, Mr. Prime Minister, is a clear example of leadership in difficult circumstances and bodes well for Albania’s chairmanship,” the Ambassador stated.

Ambassador Gilmore discussed the recent attack by Iran on American military bases in Iraq, stating that “On January 7, Iran launched more than a dozen ballistic missiles against U.S. and coalition military personnel in Iraq.  Although the attack caused no casualties, Iran’s actions threatened not only American lives, but also those of our partners and allies.  In light of these attacks, the United States will immediately impose additional, punishing sanctions on the Iranian regime.  Our sanctions will remain in place until Iran changes its destabilizing behavior in the region.”

Ambassador Gilmore concluded by stating that the United States would remain in the region and expressing hope that Iran was deescalating, saying “The United States does not seek war with Iran.  As the President has stated, the United States is ready to embrace peace with those who seek it.”  He then urged the other 56 participating States of the OSCE and cooperating partner nations to publicly condemn Iran’s actions.