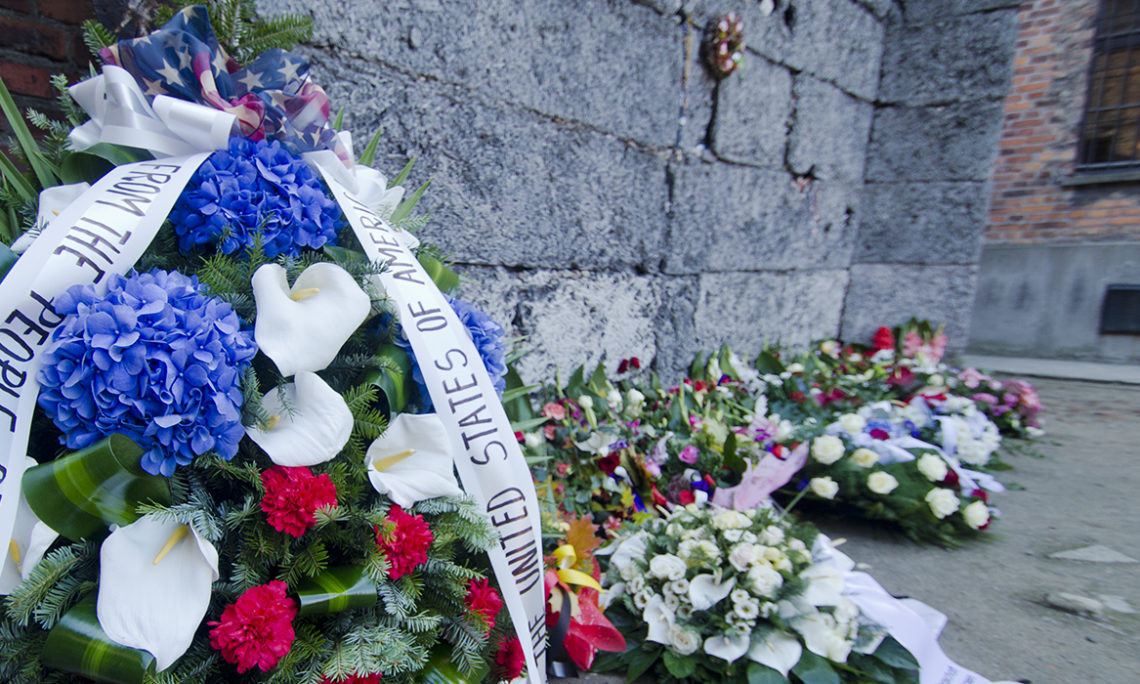 Wreaths layed at the site of Auschwitz-Birkenau in commemoration of those who perished at the Nazi concentration camp. (USOSCE/Colin Peters)

Ambassador Constantinescu, the United States welcomes you to the Permanent Council, and thanks you for your thoughtful presentation.  We thank the International Holocaust Remembrance Alliance, a leading intergovernmental organization advancing Holocaust education, remembrance, and research, for its excellent work and advocacy.  We also thank the Austrian Chairmanship for focusing this Permanent Council meeting on International Holocaust Remembrance Day, January 27, which will mark the 72nd anniversary of the liberation of the Nazi death camp at Auschwitz-Birkenau.

On this solemn occasion, we honor the six million Jews, including more than one million murdered at Auschwitz-Birkenau, who were systematically slaughtered by the Nazi regime.  Others – including Roma, LGBT persons, Slavs, and persons with disabilities – were killed just for being who they were during this time of unparalleled depravity and inhumanity.  We commit ourselves to preserve the memory of all those who perished in the Holocaust.

We also honor those who survived the Holocaust or who were spared from death by the righteous individuals who risked their lives to save Jews and others from a horrific fate.

We must act upon the lessons of the Holocaust and confront hate, intolerance, and cruelty wherever they arise.  We must speak out against bigotry and evil.  We must prevent and prosecute crimes of hate.  The memory of the murdered and the stories of the survivors remind us of our duty to counter the rising tide of anti-Semitism and other forms of intolerance that threaten the values we hold dear – the inherent dignity of every human being, human rights and fundamental freedoms, justice, and accountability.

As we contemplate the gravity of this occasion, when two-thirds of European Jewry was exterminated, the United States reaffirms our shared OSCE commitments in the human dimension, in particular those regarding tolerance and non-discrimination.  We call on OSCE participating States to implement the Basel Ministerial Declaration on Combating Anti-Semitism promptly and completely, and to give their full support to the Office for Democratic Institutions and Human Rights (ODIHR) in its efforts to fight all forms of intolerance.  When we, OSCE participating States, and the millions of individuals who live within the OSCE region, recognize the inherent dignity of every human being, we help to build a region that is more secure and free.  This is one of the best ways to honor International Holocaust Remembrance Day.

The United States was profoundly disappointed that one participating State prevented consensus on a formal decision to adopt the International Holocaust Remembrance Alliance’s working definition of anti-Semitism at the OSCE Ministerial Council in Hamburg.  At the eleventh hour, after weeks of negotiations, Russia proposed radical alterations to a text that had otherwise received wide support.  Despite this missed opportunity, the working definition remains a valuable and practical tool available to all of us, and to the OSCE institutions, to use in our work.

In closing, let me reiterate that we must never forget the lessons of the Holocaust as we stand together against anti-Semitism and all other forms of hatred.  We thank Rabbi Andrew Baker for serving as the Personal Representative of the Chairmanship on Anti-Semitism, and U.S. Senator Benjamin Cardin for serving as the OSCE Parliamentary Assembly’s Special Representative on Anti-Semitism, Racism, and Intolerance.  We commend Germany’s generous support for ODIHR’s program, “Turning Words into Action to Address Anti-Semitism,” and applaud ODIHR’s hate crimes reporting program.

As we reaffirm our commitments and honor the memories of those lost during the Holocaust, we are reminded of the words of Holocaust survivor Estelle Laughlin: “Memory is what shapes us.  Memory is what teaches us.  We must understand that’s where our redemption is.”