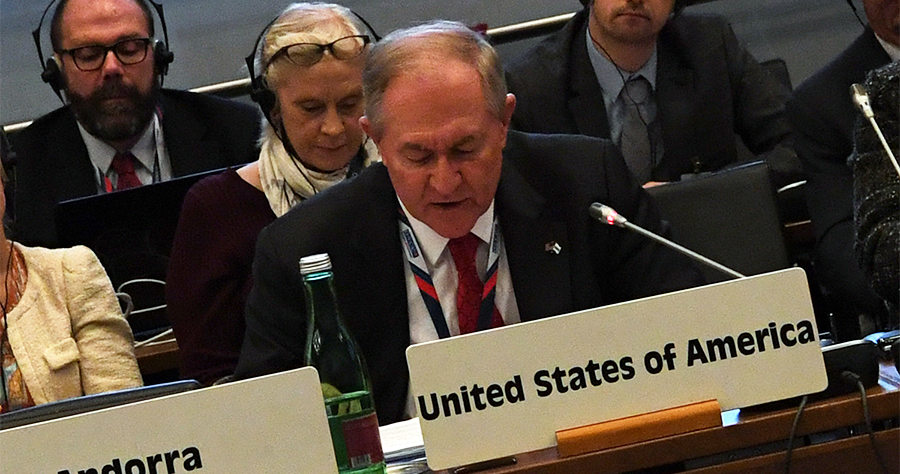 Regarding Russian Occupation of Georgia, Ambassador Gilmore Acknowledges “Wake Up Call” for the “Most Serious Situation We’ve Seen in Years”

Vienna, November 14, 2019 – Responding to the reports by the co-chairs of the Geneva International Discussions on the situation in Georgia, Ambassador James Gilmore, head of the U.S. Mission to the Organization for Security and Cooperation in Europe (OSCE), characterized their description of the deteriorating situation as an “early warning” and a “wake up call” for the 57 participating States of the OSCE in light of the “most serious situation we’ve seen in years” in Georgia. The Ambassador went on to cite numerous violations by Russian security forces and de facto “authorities” against the citizens of Georgia. Rejecting Russia’s recognition of South Ossetia and Abkhazia in the most direct and forceful terms, he called on Russia to follow the rule of law and the Helsinki principles which anchor the OSCE, as well as respect the terms of the 2008 cease fire.

Ambassador Gilmore raised the case of a Georgian woman, Margo Martiashvili, trapped inside Russian-occupied territory behind razor wire fences and other barriers, who was not allowed to cross into Georgian territory to seek vital medical attention. Sadly, Ms. Martiashvilli passed away because she was cruelly denied access to essential medical care by the de facto “authorities.”

Pointing to the recent deaths of multiple Georgian citizens in Russian-occupied areas, as well as continuing ethnic discrimination against Georgians by Russians and the de facto “authorities,” Gilmore stated, “we must again call on Russia to respect the rule of law, to direct the de facto ‘authorities’ to cooperate, and conduct full and transparent investigations into the deaths of multiple Georgian citizens, reportedly either at the hands of Russian security forces or while in their custody after having been detained. These perpetrators must be brought to justice.”

Ambassador Gilmore also reaffirmed U.S. commitments to Georgia, stating “the United States reiterates our unwavering support for Georgian sovereignty and territorial integrity within its internationally recognized borders and rejects Russia’s recognition of the occupied Georgian regions of Abkhazia and South Ossetia as independent states. That is rejected.”

The Ambassador made these comments in the context of reports by co-chairs of the Geneva International Discussions, which play a unique and important role in enhancing security, stability, and respect for human rights throughout Georgia’s territory, as well as in resolving the 2008 Russo-Georgian war.