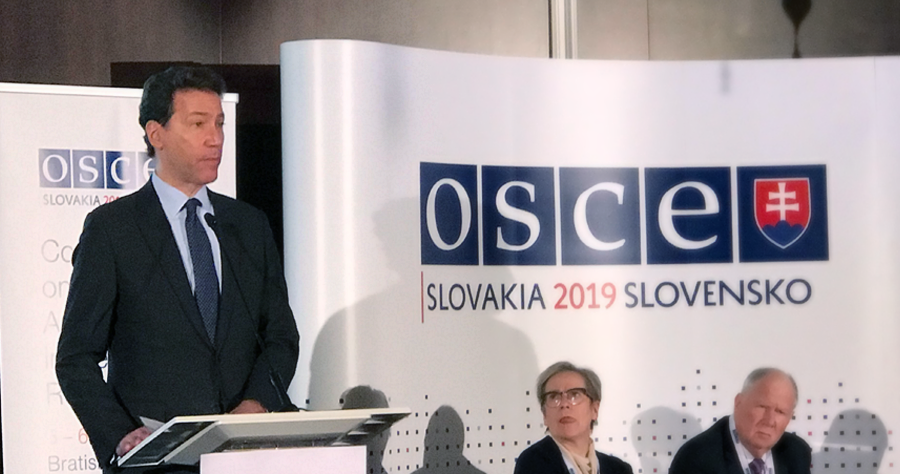 U.S. Ambassador to Slovakia Adam Sterling speaks at the OSCE International Conference Against Anti-Semitism in Bratislava, Slovakia on February 5, 2019. (US Helsinki Commission/Thompson)

Remarks at the OSCE International Conference Against Anti-Semitism

I am Ambassador Adam Sterling, the U.S. Ambassador to the Slovak Republic.  I am honored to appear before you all with the full support of President Trump and Secretary of State Pompeo.  The United States thanks the Slovak Chairmanship for hosting this timely Conference on Combating Anti-Semitism in the OSCE region.

All of us are here because we recognize that across our region, anti-Semitism is a dangerous – even a deadly – reality. The United States is deeply committed to combatting anti-Semitism in all of its forms.

Anti-Semitism doesn’t just stubbornly persist on the margins of our societies as an age-old scourge. It is also being stirred up, reshaped, mainstreamed and deliberately spread – using new technologies with unprecedented speed – to advance contemporary agendas in the Middle East or for political gains closer to home. We must be clear: anti-Semitism is never justified and it is never acceptable. Those who use anti-Semitism to further their aims discredit themselves and the causes they claim to serve.

Across our region, Jewish individuals, their places of worship and their property are targets of anti-Semitic violence and destruction. Jewish communities fear for their safety. No OSCE participating State can be complacent. Last October, in the deadliest anti-Semitic attack in U.S. history, a gunman killed eleven Jews as they gathered for services at a synagogue in Pittsburgh. As the White House stated: “This atrocity was a chilling act of mass murder. It was an act of hatred. Above all, it was an act of evil. … We all have a duty to confront anti-Semitism in all its forms everywhere and anywhere it appears.”

The United States rigorously prosecutes anti-Semitic and other hate crimes. We collect data disaggregated as to motive on such crimes to so that our decision-makers are better able to formulate effective responses. We provide those statistics to the Hate Crimes Unit of OSCE’s Office for Democratic Institutions and Human Rights (ODIHR) and urge all OSCE states to do the same.

Last fall, the European Union (EU) Fundamental Rights Agency released the results of its survey of Jewish communities in 13 EU countries, which constitute more than 96% of the EU’s estimated Jewish population. Overall, 89% of respondents felt that anti-Semitism had increased in their country in the five years before the survey; more than 85% consider it a serious problem.

The United States applauds the Chairmanship for focusing this conference on concrete ways that governments, businesses, faith communities and civil society can forge partnerships to address this compelling concern. We look forward to sharing strategies for safeguarding Jewish communities. We welcome discussion of how we can work with digital stakeholders to counter online hate. We are interested to hear others’ experiences educating youth about anti-Semitism and how we can empower our young people to become agents of tolerance. Let me share a few initial thoughts:

To combat anti-Semitism, government authorities and law enforcement, the press and the public need to know how to recognize it. The International Holocaust Remembrance Alliance’s working definition of anti-Semitism is an indispensable tool. My government uses the definition. We commend the OSCE’s Office for Democratic Institutions and Human Rights (ODIHR) for using it and the Czech Republic and Moldova for joining the growing number of countries that embrace it. We strongly encourage governments and international bodies that have not yet done so to put it into practice as well.

Education is a critical component of combatting anti-Semitism. Last April, the Conference on Jewish Material Claims Against Germany released a survey showing that two-thirds of U.S. citizens between the ages of 18 and 34 could not identify what Auschwitz is. The study found that 11% of American adults and 22% of Millennials had not heard, or were not sure if they had heard, of the Holocaust. More than half of Americans, 58%, believed that “something like the Holocaust could happen again.” A CNN poll last year on European attitudes towards Jews found that 34% of those surveyed said they knew just a little or had never heard of the Holocaust. Two-thirds said that commemorating the Holocaust helps ensure that such atrocities will never happen again. Half said commemorating the Holocaust helps fight anti-Semitism today. About a third said that Jews use the Holocaust to advance their own positions or goals, a third disagreed and a third expressed no opinion.

These surveys underscore the urgency of Holocaust education and commemoration. Each day, Holocaust survivors pass away, and with them, we lose living memory, making the need even more urgent to equip new generations to defend historic fact, reject Holocaust denial, and combat hate.

Online hate poses an exponential challenge. 89 % of the respondents to the Fundamental Rights Agency survey of 13 European Union countries rated anti-Semitism on the internet and social media as most problematic when compared to other venues. The most common anti-Semitic statements that the respondents said they come across online include: “Israelis behave like Nazis toward Palestinians” (51 %); “Jews have too much power” (43 %); and “Jews exploit Holocaust victimhood for their own purposes” (35 %). My government devotes significant resources to countering anti-Semitism online in ways that respect freedom of expression. For example, we support civil society organizations in Europe which use a range of media platforms to counter intolerance and xenophobia targeting Jewish and Muslim communities. We want to give people the tools they need to push back with strong and credible counter-narratives.

Diverse coalitions can be a powerful force for combatting anti-Semitism and other kinds of intolerance. In recent years, my government has funded efforts in central, eastern and southeastern Europe that bring together Jews with individuals from other religious and ethnic backgrounds. The participants are given opportunities they would not otherwise have to get to know one another and carry out joint activities. This sets an example and shows how greater understanding and mutual respect can advance shared goals. It is always powerful when non-Jews call out anti-Semitism.

ODIHR’s outstanding Words into Action program has developed effective models for coalition building at the community level. The program provides innovative educational packages designed to help young people resist and speak out about anti-Semitism. It also provides guidelines for understanding anti-Semitic hate crimes and addressing the security needs of Jewish communities. We encourage more countries to take advantage of this proven program, and we appreciate Germany’s sustaining contributions to it. My government strongly supports the continuation of Words Into Action and retaining the program’s intended focus on anti-Semitism. The best practices, products, and strategies tailored to battle anti-Semitism can be adapted to establish additional, complementary programs aimed at combatting forms of intolerance that target a variety of other communities.

The United States remains committed to working in partnership with all OSCE States, ODIHR, the invaluable Rabbi Baker and his fellow Tolerance Representatives, the private sector, faith communities, and civil society across the region to confront the dangers of anti-Semitism and other forms of hate.
“Never Again” must not become an empty catchphrase. When any of us utter those words, we assume a sacred duty to turn them into action in defense of the dignity and rights of all.