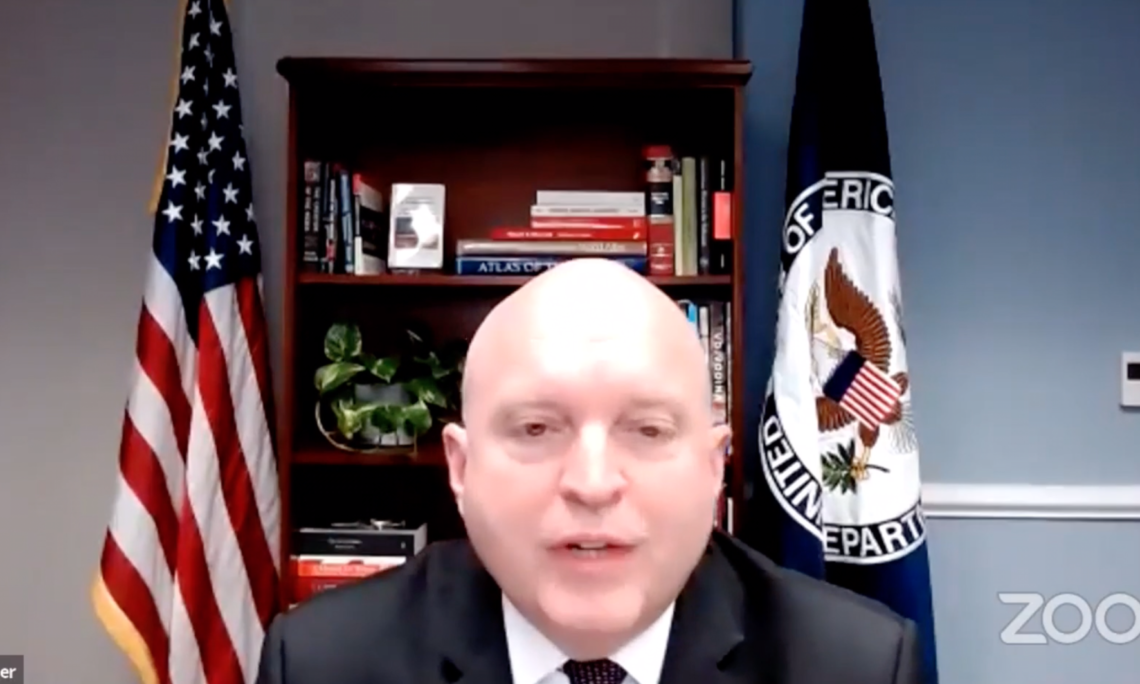 Thank you very much, Representative Hudson, for the kind introduction and for the work you’re doing with the OSCE. We in the State Department applaud this and thank you very much, and I also want to thank Courtney Austrian and her great team at the Mission at the OSCE. I truly appreciate the invitation by Secretary General Montella to address this distinguished group of speakers and participants .  The Parliamentary Assembly of OSCE plays an irreplaceable role in fostering inter-parliamentary dialogue, supporting implementation of OSCE commitments, and building a more secure, prosperous, and democratic OSCE region than I have seen at first hand in almost 30 years of diplomatic work – most of it in the OSCE region.

I really welcome this chance to speak with you  on the  Chairmanship of the Forum for Security Cooperation (FSC), as Representative Hudson mentioned.  The FSC serves as a negotiating and consultative body on political-military issues to build confidence, enhance cooperative security, and reduce the risk of conflict in the OSCE area.

Much has changed in the European security environment since the last time the USA held the chair of the FSC, nearly 18 years ago. While our priorities – like modernizing the Vienna Document, , and addressing threats like the proliferation of small arms and light weapons – while those priorities have remained the same for decades, the political climate has changed, and definitely not for the better.

Russia’s continuing aggression in Ukraine is the most egregious violation of sovereignty and territorial integrity within the OSCE region.  Its flagrant disregard for international law and for the OSCE’s foundational principles have caused a broad deterioration of the European security environment.

That erosion of Europe’s security environment, especially since 2014, is the biggest challenge we face today in the organization, and in the FSC in particular.

So I think we have to ask ourselves how we can change the trajectory.  Rebuilding military transparency and confidence would be a very good first step.  It is a primary focus of the U.S. Chairmanship of the FSC.  The Vienna Document promotes trust and predictability through transparency and verification measures covering armed forces and major equipment systems.  Insisting on the full implementation of and updating the Vienna Document has been the FSC’s primary contribution to confidence-building and military transparency in Europe.  And yet, participating States still rely on the Vienna Document’s 2011 iteration, a whole decade ago, which does not reflect current security challenges.

It is time for us to deal with this.

34 participating States have co-sponsored a comprehensive proposal for an update.  At the last Ministerial Council, 45 participating States subscribed to a joint statement calling for the modernization of  the Vienna Document in 2021.  It is clear that the vast majority of participating States are committed to enhancing military transparency, and wish to embark on a negotiation process to achieve that.  This is the year to do it.

So why is this process blocked?  The main objection voiced has nothing to do with the Vienna Document as a confidence-building tool, but rather that more confidence-building and transparency should not be negotiated until NATO unilaterally reduces its deterrence and defense posture.

The first regional security dialogue hosted by the United States as FSC Chair focused on NATO’s enhanced Forward Presence (or eFP) so participating States could discuss its goals and respond directly to any concerns about it.  We examined the history, evolution, current status, and future plans of eFP, as well as its net contribution to European security, to dispel any misunderstandings about its entirely defensive nature.  A key message emerged from this discussion:  eFP poses no threat to any other participating State and presents no impediment to modernizing the Vienna Document.  As we discussed in a subsequent security dialog, unblocking the process of Vienna Document modernization will enhance military transparency and reduce risks emanating from large snap exercises and unusual military activities.

The High-Level Military Doctrine Seminar (HLMDS) held on February 9 and 10 has been  a highlight of our FSC Chairpersonship.  This event – which takes place every five years – provided a platform for military-to-military dialogue among more than 350 senior military and security officials, with flag officers from nearly all of the participating States in attendance. As I know from my time as the civilian Deputy Commander at USEUCOM in Stuttgart doctrine does not evolve in a geostrategic vacuum – it derives from changes in threat perceptions and emerging security challenges, and it has a direct impact on regional defense planning and armed forces structures.  Working sessions explored the four “C’s” of military doctrine: conventional deterrence, competition, cooperation and crisis management.   The session on competition was probably the most cogent discussion of “below-threshold conflict” in the OSCE to date, and hybrid threats were a dominant theme throughout the HLMDS.

During our Chair, we have also examined the threat posed by man-portable air defense systems (MANPADS). Many participating States agreed on the need for a new best-practices guide recognizing the threat posed by the use of MANPADS by non-state actors, and acknowledging the vital role that OSCE and other organizations play in moderating and implementing transparency and verification practices.

We also dedicated a Security Dialogue to examine the scale and scope of explosive hazards in Central Asia, and the OSCE’s instrumental role to mitigate them in combat proliferation.

We look forward to the joint FSC-Permanent Council session on implementation of UN Security Council Resolution 1325 on Women, Peace and Security on the occasion of International Women’s Day.  This will be  a great joint session  to focus on proposals for implementing UNSCR 1325 in the FSC’s work.

Looking ahead, as Chair, we welcome continued discussion of Confidence Building Amid Strategic Ambiguity.”  The goal of this security dialogue is to assess a range of new security challenges.   There is no denying competition employing all elements of national power has a direct impact on political-military aspects of our security.  Our military leaders made that clear at the HLMDS seminar that ambiguity about strategic intentions undermines confidence.

The U.S.  Chair of the Forum for Security Cooperation demonstrates our national commitment to military risk reduction and to OSCE’s multidimensional approach to security.  Through these dialogues, we hope to make progress on this complex array of issues and to secure tangible commitments to rebuild confidence and enhance military transparency.

We hope you will also consider these topics as you prepare your draft resolutions for the Parliamentary Assembly’s annual session.

Thank you again for the opportunity to be here with you today.  Let me express my appreciation to all the members of the Parliamentary Assembly for your commitment to the organization and to strengthening regional security.