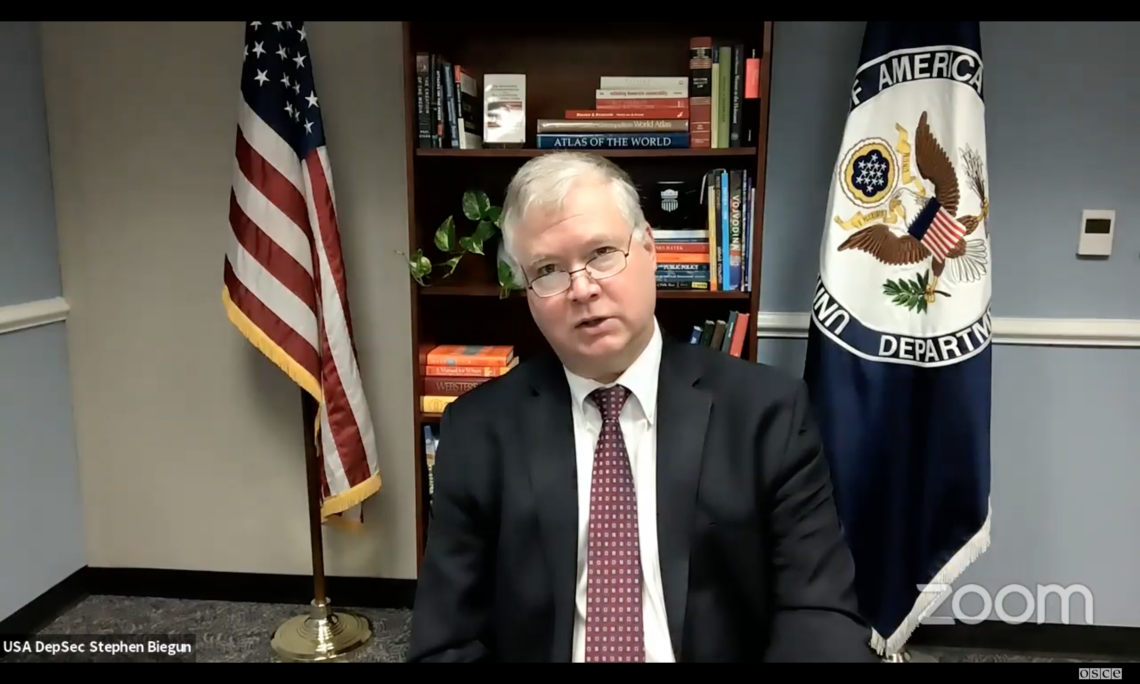 It is an honor to join Ambassador Gilmore in representing the United States and Secretary Pompeo at this Ministerial.   I commend Chair-in-Office Prime Minister Rama for his leadership throughout this year of unprecedented challenges, not least the global pandemic.  We met in person in Vienna in August when I attended the Permanent Council, and I had hoped we would meet in Tirana today.  Despite COVID-19, you have maintained the OSCE’s effectiveness, including its critical field operations.  I salute the men and women who serve in them, often under difficult and dangerous conditions.

The most egregious violation of sovereignty and territorial integrity within the OSCE area remains Russia’s continued aggression in eastern Ukraine and occupation of Crimea.  Since 2014, the conflict has killed over 13,000 Ukrainian citizens and driven more than a million from their homes.  Crimean Tatars, ethnic Ukrainians, and others opposed to the occupation face cruel repression.

Ukraine must remain at the top of our agenda.  It is unacceptable that the Special Monitoring Mission faces daily harassment and restrictions, largely in Russia-controlled areas.  Nobody is deceived by Moscow’s insistence that Ukraine is responsible for the conflict on its territory.  Russia’s actions in Ukraine and elsewhere – its flagrant disregard for international law and for the OSCE’s foundational principles – have caused a broad deterioration of the European security environment.  The United States calls on Russia to implement its Minsk commitments.  We will never recognize Russia’s purported annexation of Crimea.

Moscow’s forces are also deployed in Moldova and Georgia without host nation consent.  Russia’s use of disinformation and other hybrid methods is an omnipresent challenge to all our countries, as Moscow seeks to undermine the democratic processes of other states.  Meanwhile, at home, Moscow continues to violate the human rights and fundamental freedoms of its people, including through recent efforts to clamp down on freedom of expression and freedom of the press by significantly expanding the scope of so-called “foreign agent” rules, rendering individual journalists vulnerable to designation and increasing government censorship tools.

But the challenges to OSCE’s principles do not come only from Russia.

Since August, OSCE commitments have been broken and human rights brutally violated in Belarus.  The widespread violations and abuses documented in the Moscow Mechanism report continue.  More than 100 political prisoners are detained in Belarus for exercising their human rights and fundamental freedoms.

The Moscow Mechanism report rightly called on Belarusian authorities to cease their crackdown and heed the demands of the Belarusian people for free and fair elections under independent observation.  The authorities must release political prisoners, journalists, and all those unjustly detained.  They must engage in meaningful dialogue with the Coordination Council and Belarusian civil society.

Elsewhere in the OSCE region, we urge the Governments of Armenia and Azerbaijan to resume work with the Minsk Group Co-Chairs to reach a lasting, peaceful end to the Nagorno-Karabakh conflict.  This dispute will not be resolved on the battlefield.  We welcome the cessation of hostilities, but this is only the first step.  Any enduring solution must be based on the principles in the Helsinki Final Act.

The perils of conflicts in the region to combatants and civilians alike have been compounded by the pandemic, which has taken a terrible toll on our societies and has had an impact across all three OSCE dimensions.  It has exacerbated suffering in conflict areas, complicated monitoring efforts, and impeded arms control verification.  The economic impact has been extraordinary.  In the human dimension, we have witnessed tremendous resourcefulness from civil society actors finding ways to overcome obstacles and make their voices heard.

Yet some governments are using COVID-19 as a cover for cracking down on civil society and independent media, further restricting public access to information and undermining the rule of law.  The number of political prisoners in the OSCE region continues to grow.  Anti-Semitism, anti-Roma racism, and other forms of hatred are on the rise.  Members of racial, ethnic, and religious minorities, as well as other vulnerable populations, such as LGBTI individuals, are targets of hate crimes.  We must shine a light on abuses wherever they occur.

Promoting human dignity, security, and prosperity throughout Europe and Eurasia remains a vital interest of the United States, and the OSCE remains indispensable in advancing this mission.  Respect for the foundational principles of this organization is essential to achieve those goals.

Ministers, the OSCE’s comprehensive approach to security and its ambitions in all three of its dimensions have never been more relevant and important.

My government hoped we would be able to adopt strong, substantive decisions in all three dimensions at this meeting.  While we have made modest progress, there is much more to do.  In the coming year, we should work to update the Vienna Document to enhance military transparency, share best practices as we recover from the impacts of the pandemic, and push for a decision on environmental issues that commits us to stop trafficking in natural resources and wildlife.  We must press governments to uphold their human dimension commitments, give audience to the voices of civil society, and hold a Human Dimension Implementation Meeting in 2021 where governments are called to account for their actions.

I am very pleased that we are poised to appoint a strong new slate of leaders at this Ministerial Council meeting to carry on this work, including my friend Helga Schmid.  The challenges we face demand strong leadership, and the United States stands ready to support these leaders.

We extend our thanks again to Prime Minister Rama for Albania’s principled leadership under extraordinarily difficult circumstances.  My government will give its full support to the Swedish Chairmanship as it takes up the OSCE’s agenda in 2021.