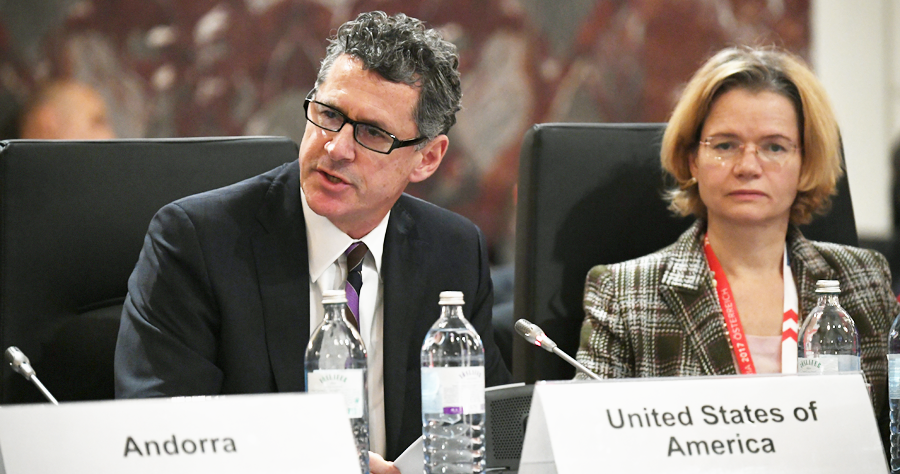 As delivered by Chargé d’Affaires, a.i. Harry Kamian
at the Closing Session of the 2017 OSCE Ministerial Council Meeting, Vienna
December 8, 2017

Mr. Chair, in his opening statement yesterday, Secretary Tillerson called the OSCE an indispensable pillar of our common European security architecture – an architecture that bolsters peace and stability throughout the region. As this 24th OSCE Ministerial Council comes to a close, let us reflect for a moment on the vision rooted in the Helsinki Final Act and on what that should mean for all of us here today.

The signatories of the Helsinki Final Act believed that a rules-based international order could help us meet common challenges. The OSCE was born with the hope that through commitments to basic principles of international behavior – including respect for the territorial integrity of states, the inviolability of frontiers, and respect for the sovereignty of other states and the human rights of our people – we could avoid the kinds of conflicts that rocked the European continent throughout the 20th century and, collectively, build a Europe whole, free, and at peace.

Events of the last decade have tarnished this optimism. Most recently, in 2014, Russia-led forces violated Ukraine’s borders. The United States is committed to Ukraine’s sovereignty, independence, and territorial integrity within its internationally-recognized borders. We call for the full implementation of the Minsk agreements, and will never accept Russia’s occupation and attempted annexation of Crimea. And Crimea-related sanctions will remain in place until Russia returns full control of the peninsula to Ukraine. We join several other participating States today in voicing our regret regarding the failure to produce a declaration on this number one threat to the security of Europe, and we welcome Italy’s commitment to prioritizing this issue during its upcoming Chairmanship.

The United States remains committed to the SMM [The OSCE Special Monitoring Mission to Ukraine] as a vital component for achieving peace in Ukraine. As participating States, we share ensuring that each and every monitor, regardless of their nationality, enjoys the full support of all of us. On behalf of the United States of America, I would like to thank my colleagues and those ministers who were kind enough to mention the horrific loss of Joseph Stone in their opening statements. As I’ve said before, it’s our collective responsibility to make sure that there is no more loss of monitors. It should never happen again. And particularly those participating States that have the direct ability to influence that, I call upon them to take extra precautions to ensure that we never lose another monitor. In this light, let me be even more clear. We call on Russia and its proxies to end their harassment and intimidation and attacks on the Mission, and to permit the Mission to access all of Ukraine, including the internationally-recognized border with Russia.

Secretary Tillerson noted yesterday that the United States welcomes the frank exchanges that have already occurred in the Structured Dialogue on the challenges that nations view as primary threats to peace and safety. At a time when existing arms control agreements are being violated, we cannot seriously discuss new arrangements. The United States does stand ready to participate actively in intensified discussions next year under the Italian Chairmanship on the full range of threat perceptions that have been raised. As Secretary Tillerson noted yesterday, we need to take action to rebuild military transparency by updating and modernizing the Vienna Document, even as we press for full implementation of existing agreements.

On Moldova, the United States welcomes the statement agreed at this Ministerial Council highlighting the important accomplishments of the recent 5+2 meeting in Vienna, including the reopening of a key bridge to facilitate the free movement of goods and people, as well as several other important steps that will improve the lives of people on the ground. However, that text does not address all the issues relevant to the OSCE’s work to promote a political settlement of the conflict in Moldova. We need to continue to focus on achieving implementation of Summit commitments relating to Russian military withdrawal from Moldova and on Moldova’s call to transform the current peacekeeping force into a genuinely multinational presence.

We were pleased to join the Friends of Georgia in issuing a statement at this Ministerial that makes clear our support for Georgia’s territorial integrity within its internationally-recognized borders, and we welcome the frank discussion on a Georgia regional statement, though disagreements on core principles made agreement on a text impossible.

We support the efforts of the Minsk Group to find a lasting and peaceful solution to the Nagorno-Karabakh conflict. We welcome the December 6 meeting of the foreign ministers of Armenia and Azerbaijan and the issuing of a statement yesterday by the Heads of Delegation of the Minsk Group Co-Chair countries. We were pleased by commitments made by the Presidents of Armenia and Azerbaijan at their October summit to intensify negotiations and to reduce tensions along the line of contact.

We welcome the cyber decision, which sets the Informal Working Group on Cyber up for continued success. However, we regret that consensus on an important new counterterrorism declaration – which would have established a new policy framework for the OSCE’s work in rehabilitation and reintegration of foreign terrorist fighters and their accompanying family members – was not achieved.

Mr. Chair, we are living in a time when civil society and independent media are under considerable pressure in a number of participating States. As you noted in your statement, intolerance in many forms is on the rise in our region. It is in this context that it is regrettable that agreement was not reached on texts in the areas of media freedom, discrimination on religious grounds, and freedom of peaceful assembly. I wish to express our profound appreciation to the Chairmanship for its efforts to help advance our work and to train the spotlight on these important issues. The United States joins the overwhelming number of participating States in categorically opposing the eleventh hour attempt by one participating State to insert language aimed at compromising the mandate and independence of the Representative on Freedom of the Media. As Secretary Tillerson said yesterday, the United States “will reject efforts to weaken any of [the OSCE’s] institutions.”

Looking forward, we should now turn our attention to focusing on collective efforts on implementing our international obligations and OSCE commitments on human rights and fundamental freedoms, looking to leverage the expertise of the Representative on Freedom of the Media, the Office for Democratic Institutions and Human Rights, the High Commissioner on National Minorities, the Chairmanship’s Representatives, and our field missions.

Mr. Chair, I wish to commend the civil society representatives who gathered in Vienna for the parallel conference on the eve of the Ministerial. I thank them for their participation and their insightful report and thoughtful recommendations‎ across all three dimensions of our work. I had the privilege of meeting with a number of them yesterday, and I came away from that meeting as convinced as ever that civil society’s contribution of ideas and insights is crucial to the integrity and advancement of the Helsinki process and to the achievement of comprehensive security. The United States will oppose any attempts to reduce or unduly restrict civil society’s access to and participation in OSCE proceedings, and will continue to champion the courageous efforts of civil society activists across the region.

We‎ welcome the adoption today of two strong texts on combating trafficking in persons: one on prevention of human trafficking and one on combating all forms of child trafficking as well as other sexual exploitation of children. The latter decision addresses imminent threats to children from traffickers on the Internet, encourages participating States to prosecute traffickers who misuse the Internet to facilitate access to children for exploitation, strengthens our commitments to international law enforcement cooperation for the prevention of child sex tourism, and calls on participating States to take new, strategic, and specific actions to protect children from accessing pornography on the Internet.

Mr. Chairman, regrettably the failures of some participating States to implement their OSCE commitments should not render those commitments any less valid nor the fundamental truth underlying our Organization’s concept of comprehensive security any less true. In our view the OSCE is, and will continue to be, a major contributor to regional security and stability, as necessary and relevant today as it was in 1975. Our collective commitments to the Organization are just as real. Despite individual budget constraints and other challenges, the 57 participating States must continue to provide the OSCE with the resources it needs to carry out its mandate, especially in the independent institutions and field missions. All – let me be clear – all participating States must assist the Italian Chairmanship and agree to both a 2018 Unified Budget and a continued mechanism for assessing participating States’ Scales of Contribution before the end of the year.

Mr. Chair, before concluding, allow me to thank – on behalf of Secretary Tillerson and his entire delegation – you and your team. Thank you for your hospitality, patience, and hard work. I wish to commend Italy for taking on the Chair next year, during a particularly challenging time. Italy can count on full U.S. support and cooperation next year.

Thank you, Mr. Chair. I ask that this statement be attached to the Journal of the Day.