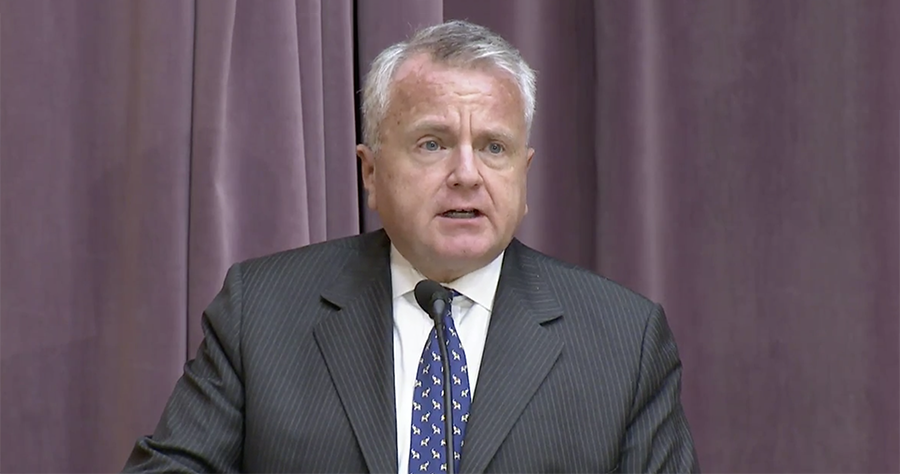 Asst. Secretary of State Sullivan speaks at Engaging Men and Boys in Preventing Violence Against Women and Children Event

Good morning, everyone. Thank you for being here today. I’m delighted to be here, honored to be able to speak before you.

Each year on November 25th, we commemorate the International Day for the Elimination of Violence Against Women and observe the accompanying 16 days of activism against gender-based violence.

Those 16 days of activism against gender violence offer a global platform for governments, organizations, individuals around the world to mobilize and call attention to the urgent need to end violence against women and girls across the board.

As Ambassador Kozak mentioned, I was just in Nigeria a couple of weeks ago and met with civil society groups, survivors, women and girls – young girls, teenage girls – who have endured just the most horrific crimes against them and their families. And so it’s a compelling issue for any person, but for us as Americans in particular.

Gender-based violence harms individuals, violates the most basic of our inalienable human rights. From sexual assault, early or forced marriage and rape, to dating violence and so-called honor killings, women and girls disproportionately face violence around the world. The statistics, unfortunately, are both shocking and saddening. An estimated one out of every three women worldwide has been subject to violence, rape, or other abuse in her lifetime. According to the World Health Organization, at least 30 percent of women worldwide have experienced this kind of violence at the hands of a partner. According to the – UN Women, violence against women causes more death and disability for women and girls between the ages of 15 and 44 than cancer, traffic accidents, malaria, and war combined.

Finally, in the United States, nearly one out of every three women – and one out of every six men – has experienced some form of sexual violence. Beyond the obvious and direct harm to the individual, violence against women damages society as a whole and stifles or reverses progress made in economic development, health, and security. For instance, radical terrorist organization, including – organizations, including those which we unfortunately have experienced within Nigeria, directly target women and girls to achieve their ideological and tactical objectives. These attacks on girls and their schools prevent them from receiving an education by keeping them out of the classroom and alienate them from reaching their full potential as citizens, entrepreneurs, leaders, or just as human beings.

And this violence doesn’t merely impact a victim; it causes a chain reaction, further contributing to the cycles of poverty and instability we witness in so many countries, impacting not only individuals, but entire societies. Whether it occurs inside or outside of the workplace, violence against women can limit women’s ability to fully participate in the economy. It’s not an easy topic to talk about – it’s often painful, it’s emotionally draining to be with the survivors – but we must face it head-on if we’re going to make any progress.

And one of the most important steps to ending this global problem is engaging everyone, including men and boys. Violence against women negatively affects men and boys in two ways: directly, as survivors of violence, and indirectly, through their exposure to it. Study after study has shown that when violence is witnessed or experienced, it’s likely to be repeated. Gender-based violence is cyclical. Men who witness violence at an early age are twice as likely to be perpetrators of violence in the future. Similarly, girls who experience abusive relationships early in their lives are at an increased risk of being victimized by others later in life. Engaging men and boys as loving, supportive, and involved husbands and fathers is critical to achieving sustained transformational change.

Since its founding in Brazil 20 years ago, our partner, Promundo, working alongside a number of other dedicated partners, has helped to prevent violence in more than 40 countries through high-impact research and evaluation, targeted advocacy efforts, and evidence-based educational programming. Programs like Promundo engage men and boys in the fight against gender-based violence by growing male leadership and promoting gender equality. Promundo encourages men to be acting – active, loving, and equitable caregivers in their roles as fathers. To this end, Promundo has established the MenCare campaign to promote men’s involvement as dedicated fathers and caregivers, strengthen families, improve gender equality, and promote better health for the entire family. Promundo has also begun International Men And Gender Equality Surveys, or IMAGES, which measure men’s and women’s attitudes and practices around gender equality and violence against women and girls.

And today, we’re excited to celebrate the launch of Voices Against Violence, or VAV – a public-private partnership with the Avon Foundation that provides a comprehensive approach to combating violence against women, and engages men and boys to break the cycle, especially in conflict areas. And it’s in these conflict areas that the targeted use of violence against women, especially sexual violence and exploitation, is used as a tool of war and sadly perpetrated far too often. From conflicts in Bosnia and Herzegovina, Colombia, and Liberia, to more recent violence by ISIS, Boko Haram, and security forces in Myanmar, we see time and again that women are disproportionately affected in times of crisis.

VAV works to engage men and boys at – on every level. It brings together key stakeholders to leverage skills and best practices that can be utilized globally. By ensuring men and boys are involved in training to prevent violence, it helps other men recognize that this is not just a women’s issue and that we need everyone’s help to make a change.

VAV will serve as an effective new tool for embassies and our bureaus here at State to not only assist survivors of gender-based violence but also to break the cycle of violence by working directly with men and boys on this issue. Additionally, VAV will help the State Department undertake important initiatives like responding to acid attacks, preventing female genital mutilation, and putting an end to honor killings so that we can protect women across the globe who have nowhere else to turn.

Incorporating men and boys to become stout agents of change and advocates to end violence against women and children is an essential element to solving a global problem. We are making progress, but it’s just the beginning. There is still much more to be done. And by continuing to work together to promote gender equality and eliminate gender bias, I’m confident that we can make great strides in breaking this cycle of violence.

On behalf of Secretary Tillerson, I want to thank you for coming here today. We hope that these important discussions will bring us at least one step closer in our efforts to engage men and boys and put an end to a problem that affects all of us. Thank you very much.