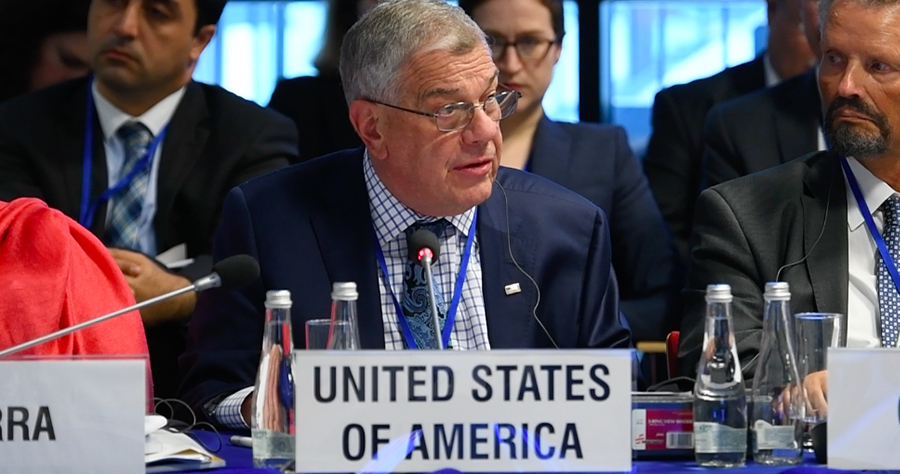 As prepared for delivery by Ambassador Michael Kozak, Head of Delegation
to the 2017 Human Dimension Implementation Meeting, Warsaw
September 11, 2017

The OSCE’s comprehensive security concept, enshrined in the Helsinki Final Act’s Decalogue of founding principles, links respect for human rights within states to lasting security and cooperation among states.

Where respect for human rights and fundamental freedoms is weak or absent — where authority rejects accountability, where government controls media and suppresses independent ideas, where repressive laws are wielded as political weapons, and where peaceful aspirations for change are treated as threats – stability is not as stable as it seems, democratic and economic progress is increasingly difficult to sustain, and international peace is at risk.

The Russian Federation’s aggression against Ukraine reflects a stark disregard for the Helsinki principles. The conflagration that Russia ignited and continues to fuel is far from frozen. To date, 10,000 people have been killed, 24,000 have been wounded or injured. An estimated 1.7 million Ukrainian citizens have been forced from their homes. The Russian proxies in Donetsk and Luhansk — kept in power by the forces that Russia leads, arms, trains and fights alongside — threaten and intimidate the local population. In Crimea, Russian authorities target Crimean Tatars, ethnic Ukrainians and others who oppose the occupation. Even while under attack, the Ukrainian people are unwavering in their commitment to realize a future of dignity and prosperity through greater integration with Europe. Meanwhile, Russia uses intimidation and coercion to try to keep Moldova and Georgia from acting on their sovereign decisions to deepen their own integration with Europe.

Russia’s aggression abroad goes hand-in-hand with repression at home. Opposition figures and independent journalists who expose corruption and other abuses of power continue to be physically attacked, sometimes lethally and all too often with impunity. Domestic civil society groups advocating for human rights, free and fair elections processes and other reforms continue to be labelled under repressive laws as “foreign agents” without any pretense of proof that they are representing or acting under the direction or control of foreign governments. Foreign organizations that work openly with Russians citizens seeking to advance democratic development are designated as “undesirable” and driven from the country. Russia makes false accusations of foreign interference despite having affirmed that human dimension commitments “are matters of direct and legitimate concern to all participating States, and do not belong exclusively to the internal affairs of the State concerned.”

Russia is not alone in imposing serious restrictions on civil society and foreign media. Independent voices are under pressure in multiple participating States across the OSCE region.

Today, as my country solemnly marks the anniversary of the September 11, 2001 terrorist attacks, we join all states across this region and the world that have grievously suffered from terrorist violence. Our hearts go out in solidarity to the people of Spain and Finland, who so recently endured vicious attacks in Barcelona and Turku. My government seeks partners to defend against ISIS, al Qaeda, and other terrorist groups that have declared war on our countries. Here at HDIM, we look forward to exploring how governments and civil society can work together to fight terrorism by addressing its drivers. But let me be clear: Governments that in the name of counterterrorism crack down on peaceful human rights defenders, political opponents, independent journalists, and peaceful members of religious or ethnic minorities do so to serve their own ends, not to strengthen the security of their countries. When governments violate the human rights of their people, they undermine the security they purport to protect. People need fundamental freedoms to organize themselves against violent extremists. Fundamental freedoms also grow healthy political processes that give young people hope and an ability to influence their future through peaceful political means.

Ladies and Gentlemen: Our shared commitment to respect the inherent dignity of the human person, common decency, and the lessons of history require us to condemn and combat hate in all of its ugly forms. There can be no place among us for anti-Semitism, anti-Muslim and anti-Christian discrimination, or anti-Roma and other racist sentiment. There can be no room for hate crimes against members of those communities and others, such LGBTI individuals, migrants, and persons with disabilities. Regrettably, none of our countries is free from hate. The United States is firmly committed to upholding freedom of expression, which means that even the handful of white supremacists, the Ku Klux Klan, neo-Nazis and other assorted anti-Semites, racists and bigots have a right to express their disgusting views as long as they do so peacefully. At the same time, the overwhelming majority of my fellow Americans – including the President and other senior leaders of the Executive Branch, as well as the leadership of both parties in Congress – have rejected them and all they represent. The fullest force of the law will be brought against those responsible for the violence in Charlottesville, Virginia, including the killing of Heather Heyer. The apparent perpetrator of her death was immediately arrested by local law enforcement, and the Federal Bureau of Investigation, the Justice Department’s Civil Rights Division and the U.S. Attorney’s Office for the Western District of Virginia have opened an investigation into the violence, including the car attack that killed Ms. Heyer and injured many more. The rule of law will prevail.

My colleagues and I on the U.S. delegation are proud to represent one of the most diverse nations on Earth and one of the world’s longest continuing constitutional democracies. Making our country a more perfect union has been a work in progress for more than two hundred years. We hold rigorous, competitive elections that result in peaceful transitions of power. Our executive, legislative and judicial branches of government are co-equal and not shy about asserting their independence. Our free, pluralistic media and robust civil society shine an unsparing light — and spur an unceasing debate — on the challenges we face at home and abroad.

Here, too, at HDIM, my delegation welcomes honest discussion of the issues.

We look forward to exchanging views on the implementation of shared human dimension commitments. We seek to strengthen the OSCE institutions that help us put commitments into practice and we will continue to defend their independence, mandates and budgets. I warmly congratulate the new leaders of our institutions on taking up their vital responsibilities.

I wish also to thank Poland for graciously hosting this annual gathering and the Office for Democratic Institutions and Human Rights.

The participation at HDIM of independent civil society members from across our region remains essential to the quality and integrity of our discussions. The United States continues to stand with those who work in Baku and Ashgabat, Moscow and Dushanbe, Ankara and Astana, Budapest and Bishkek, Minsk and Tashkent to defend human dignity, universal rights and democratic government. Human rights defenders are the heartbeat of the Helsinki process.