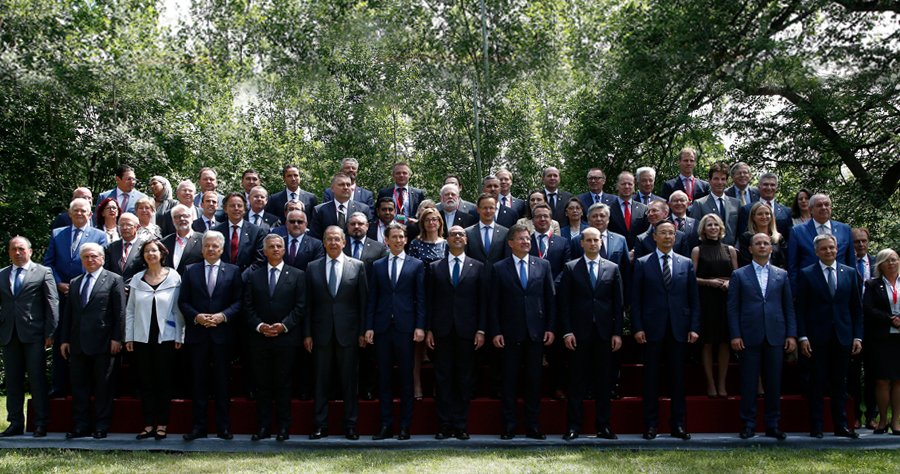 Remarks to the OSCE Informal Ministerial Meeting at Mauerbach

As prepared for delivery by Acting Assistant Secretary of State
for European and Eurasian Affairs John Heffern
July 11, 2017

The United States remains totally committed to the OSCE. We think its inclusive membership as well as its comprehensive concept of security make it uniquely valuable as a forum for addressing the region’s hardest security challenges. It is precisely because the security challenges are difficult that we are here today.

The OSCE region faces severe challenges and is under stress in large part due to a failure by some participating States to uphold foundational OSCE principles and implement their commitments. Russia’s military action against Ukraine – its illegal occupation and purported annexation of Crimea, and the conflict it fomented and still fuels in eastern Ukraine – along with its continued aggression in Georgia has transformed the European security environment in a direction none of us wanted or expected.

I am proud to say that the OSCE has responded to this security crisis with creativity and courage. No other organization could have succeeded in putting a monitoring mission on the ground in Ukraine; the Special Monitoring Mission must be allowed to provide the international community with impartial reporting on the situation on the ground. The price has been high; I appreciate the tribute this organization, including by Foreign Minister Kurz and others this morning, has given to Joseph Stone, the American paramedic who was killed in the service of the SMM.

In the end, what endure are the promises our leaders make and keep. To end the bloodshed in Ukraine, Russia and Ukraine signed the Minsk Protocol and Memorandum and agreed to allow full, unfettered, safe access by the SMM. We reiterate our call to honor these commitments.

The erosion of trust we face in the OSCE community has many, many sources. These include deep concerns about Russia’s military intentions vis-à-vis its neighbors and its ongoing breaches of core Helsinki Final Act principles and commitments. These concerns contribute to perceptions of threat that give rise to new force postures and new patterns of military activity. At the same time, we face common challenges to our security that are transnational in character, including the threat of terrorism and violent extremism. But we cannot and must not allow concerns about external threats to cause us to set aside problems closer to home: the proliferation of violations of basic human rights within participating States is a more serious threat to universal values and to the security of our region.

We must find ways to work together to address all these issues. The United States supports the OSCE’s Structured Dialogue on security issues precisely because it offers a way to identify the concerns that must be addressed if we are to re-establish confidence and trust. Foremost among these is the threat posed by actions that violate the rules-based international order, and basic commitments like the Helsinki Final Act. Commitments in all three dimensions of security must be fulfilled. Russia’s commitment under the Minsk agreements to implement a lasting ceasefire, withdraw troops and weapons, and restore control of Ukraine’s international border is chief among those security concerns. Once Russia moves on the security side, it will be important that Ukraine move on its political commitments.

We likewise believe that rebuilding military transparency is an essential task that should be among our top priorities – we need to work together to update the Vienna Document so it provides the level of openness we need, in addition to ensuring its full implementation. The Structured Dialogue will only work if it is given time and space and if there are no pre-conceived outcomes, no artificial deadlines, and it is not influenced by outside agendas.

There is no substitute for the political will to work together to find solutions, rather than take unilateral actions at the expense of the sovereignty and territorial integrity of neighboring States.

To promote security across the region, we need to give OSCE the resources it needs to operate effectively. Its institutions – including the field missions – need to be effectively led and fully staffed through a competitive and transparent process. The recent closure of the Office in Yerevan – the last OSCE field mission in the South Caucasus, whose good work under a very capable Russian diplomat I witnessed firsthand – further illustrates the erosion of trust we face as a community. As we sit here today, the organization has barely begun discussions for next year’s budget, and is still in the process of moving forward on appointments to four key leadership positions. Military tensions and conflict, violent extremism, violations of human rights – all make this region and our respective States and societies less successful and secure.

The task is to find a pathway forward that acknowledges and grapples with these sobering realities. We did make progress on the four appointments, and we welcome that progress. The United States will continue to defend OSCE’s foundational principles and the institutions and missions that help give them effect. And we will work with all participating States to address the 21st Century security challenges in a manner that is worthy of the aspirations of all our people to live in a region that is whole, free, prosperous and at peace.