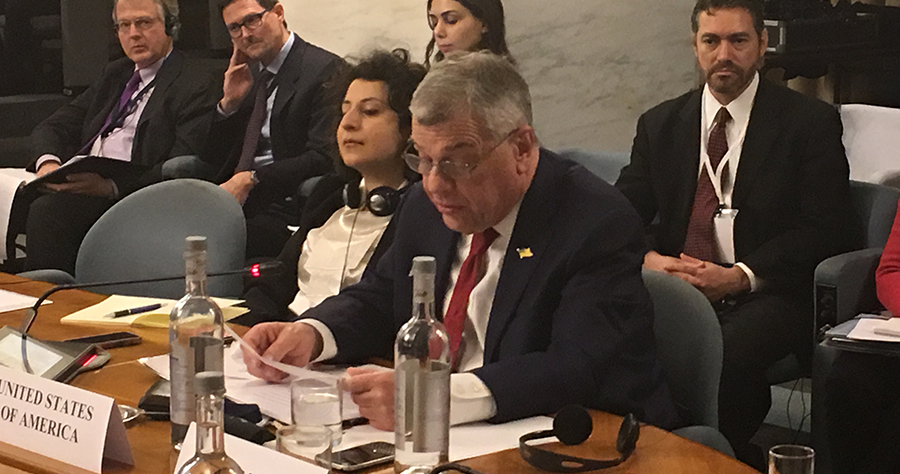 Remarks at the OSCE International Conference Against Anti-Semitism

Thank you, Foreign Minister Alfano, for hosting this important conference on combatting anti-Semitism as the first event of Italy’s Chairmanship of the Organization for Security and Cooperation in Europe (OSCE). We also applaud Italy’s Chairmanship this year of the International Holocaust Remembrance Alliance.

This conference is a particularly appropriate follow-up to International Holocaust Remembrance Day. As President Trump said: “Every generation must learn and apply the lessons of the Holocaust. We will stamp out prejudice. We will condemn hatred. We will bear witness and we will act.”

Absent action, the sacred pledge of “Never again” can become empty rhetoric. When we reject anti-Semitism by word and deed — when we take a stand against intolerance and demand respect for the inherent dignity and human rights of every person — we give renewed meaning to “Never again.”

In 2004 and then in 2014, OSCE participating States gathered in Berlin to decry the rise of anti-Semitism. On both occasions, States committed themselves to combat anti-Semitism. Now, as we begin 2018, age-old forms of anti-Semitism persist while new manifestations propagate with unprecedented speed. Anti-Semitic violence against Jewish persons, places of worship, and property continues to increase. Jews and Jewish communities fear for their safety. The problem only grows more urgent.

That is why, above all, this conference must be about taking action. And our action must be informed by one overarching truth: There is no justification for anti-Semitism. Ever.

Let me now frame some key issues and recommend actions that my government believes are both principled and practical. My delegation looks forward to hearing from fellow participants about their experiences and best practices.

To act effectively against anti-Semitism, it is essential for everyone – in government at all levels, in law enforcement, educators and religious leaders, CEOs and sports heroes, and everyday people of goodwill – to be able to recognize anti-Semitism in all of its ugly forms, be they traditional or under the guise of contemporary politics.

As the participating States declared “unambiguously” in Berlin in 2004 and again in 2014: “ … international developments, including with regard to the situation in the Middle East, never justify anti-Semitism.” Non-violent opposition to Israeli government policies, like such opposition to the policies of any other government, cannot be regarded as anti-Semitic. But attacking Jewish communities and individuals in the name of protesting Israeli government policy is a clear form of anti-Semitism. Physically assaulting Jews, destroying Jewish schools, or desecrating synagogues and cemeteries, or otherwise holding all Jews responsible for the policies of Israel is anti-Semitic.

We cannot overstate the practical value of the International Holocaust Remembrance Alliance’s working definition of anti-Semitism. Using the definition does not change our international obligations or our internal laws, but it does mean that when we report on or discuss anti-Semitism we are all talking about the same thing and using the same vocabulary. My government uses the working definition as do many others. We commend the definition’s ongoing use by OSCE’s Office for Democratic Institutions and Human Rights (ODIHR). And we encourage all who have not done so to put the definition into practice.

The lessons of History and our shared OSCE commitments tell us that there can be no room for hate crimes against anyone, anywhere, for any reason. Yet no country is immune, the United States included. Our Federal Bureau of Investigation’s most recent hate crimes statistics released last November show a 13.6 percent rise in hate crime offenses motivated by religious bias from 2015 to 2016 (from 1,354 to 1,538 offenses). Jews and Muslims were the most targeted among all religious groups, comprising over three-quarters of all reported offenses: 24.8 percent of the offenses were anti-Muslim and 54.2 percent were anti-Jewish. Anti-Muslim hate crimes rose from 301 offenses in 2015 to 381 offenses in 2016, and anti-Jewish hate crimes rose from 695 offenses in 2015 to 834 offenses in 2016.

To combat hate crimes, States need to be armed with comprehensive, disaggregated data. My government strongly supports the work of the ODIHR’s Hate Crimes Unit and its efforts to collect such data. Yet only 13 states out of 57 OSCE participating States reported anti-Semitic hate crimes to ODIHR, while NGOs provided ODIHR information on such hate crimes in 23 States last year. We commend the European Union’s Fundamental Rights Agency for undertaking this year a second, major survey of discrimination and hate crime against Jews living in thirteen EU countries.

Collecting data about the motivation for a crime does not place the human rights of members of one group above those of another or stigmatize an entire community for the crimes of a few. But the ability to distinguish whether attacks were motivated by, say, a race or a sexual orientation or a religious bias does help decision-makers formulate effective policies. Without reliable, disaggregated information on the motives of perpetrators and the impacted populations, a State cannot tell whether its efforts are helping, hurting, or having no effect whatsoever. We urge States to disaggregate data by type of crime committed and type of bias involved, and to use common criteria for identifying hate crimes. We also strongly encourage States to work with civil society to develop strategies for addressing the multi-faceted problem of underreporting of hate crimes, including barriers that impede survivors from reporting the crimes committed against them.

The obvious bears repeating: hate crimes are crimes, and as such they must be investigated and the perpetrators held accountable. A key element in this effort is building trust through collaboration between law enforcement and affected communities.

Across our region, extremist groups espouse messages and agendas that are frighteningly reminiscent of the Holocaust era, targeting Jews and members of other religious and ethnic minorities, migrants as well as Roma and LGBTI individuals. We share the concern voiced here today that the vile messages of anti-Semites and other haters are able to gain global reach through their use of online technologies, and that online anti-Semitic harassment is increasing. My government devotes significant resources to countering anti-Semitism online. For example, we support civil society organizations in Europe which use a range of media platforms to fight against intolerance and xenophobia targeting Jewish and Muslim communities. These efforts help raise awareness of the problem, debunk inflammatory rhetoric, and advance strong and credible counter-narratives.

As is well known, my country believes that most anti-Semitic and other forms of hate speech are protected by freedom of expression. White supremacists, neo-Nazis and other anti-Semites, racists and bigots have a right to express their disgusting views, but they must not resort to violence. Government officials and other prominent figures should not relegate to the workings of the judicial system the responsibility to condemn the voices of hate. Those in positions of power, influence and public trust should always speak out. And we must all work with digital stakeholders to better use the power of technology to promulgate counter messages defending human decency and promoting tolerance.

Governments, non-governmental organizations, and people of goodwill in the private sector must partner to help educate the public, and especially the young. As Holocaust survivors and rescuers age, opportunities fade for youth to hear fist-hand accounts of The Shoah. My delegation is honored to have as a distinguished member Dr. Robert Williams, Deputy Director of the U.S. Holocaust Museum, who will recount how the Museum reaches out to ever wider audiences to educate them about the Holocaust and its relevance to fighting present-day injustice and preventing atrocities.

Having clear and closely coordinated focal points within and among governments for addressing anti-Semitism can be extremely useful. ‎For example, the Federal Bureau of Investigation and the Civil Rights Division within our Department of Justice aggressively investigate and prosecute hate crimes, including those committed against individuals and communities on the basis of their religious beliefs or backgrounds. In 2004, Congress created in our Department of State the position of U.S. Envoy to Monitor and Combat Anti-Semitism around the globe. We look forward to the nomination of a new envoy. Since the Berlin Conference in 2014, more countries in the OSCE region have appointed special envoys or commissioners to combat anti-Semitism. A number of them also cover Holocaust issues and religious freedom. Germany’s parliament has just called for the establishment of such a commissioner.

Let me take this opportunity to applaud the Chairman-in-Office’s Representative on Combatting Anti-Semitism, Rabbi Andrew Baker. His wise counsel has been critical to the OSCE’s work on tolerance and non-discrimination and he has enriched this conference by helping ensure the participation of distinguished presenters. We also strongly commend ODIHR for its “Turning Words into Action” Project. The Project develops tools for addressing hate crimes and the security needs of Jewish communities, and fosters tolerance through education and youth empowerment.

In Berlin in 2004, the participating States recognized that anti-Semitism and other forms of intolerance “pose a threat to democracy, the values of civilization and, therefore, to overall security in the OSCE region and beyond.” That was not hyperbole. Unchecked hate led to the ultimate horror of the Holocaust. In the decades since, in this very region and elsewhere in the world, we have seen how flames of hate can be fanned into ethnic cleansing, mass murder, genocide, and destruction on a terrible scale.

The United States remains committed to working with governments, businesses, faith communities, and civil society across the OSCE region to condemn and combat anti-Semitism and promote respect for the dignity and human rights of all. This conference gives us the chance to forge powerful partnerships of action against hate. May we seize it.