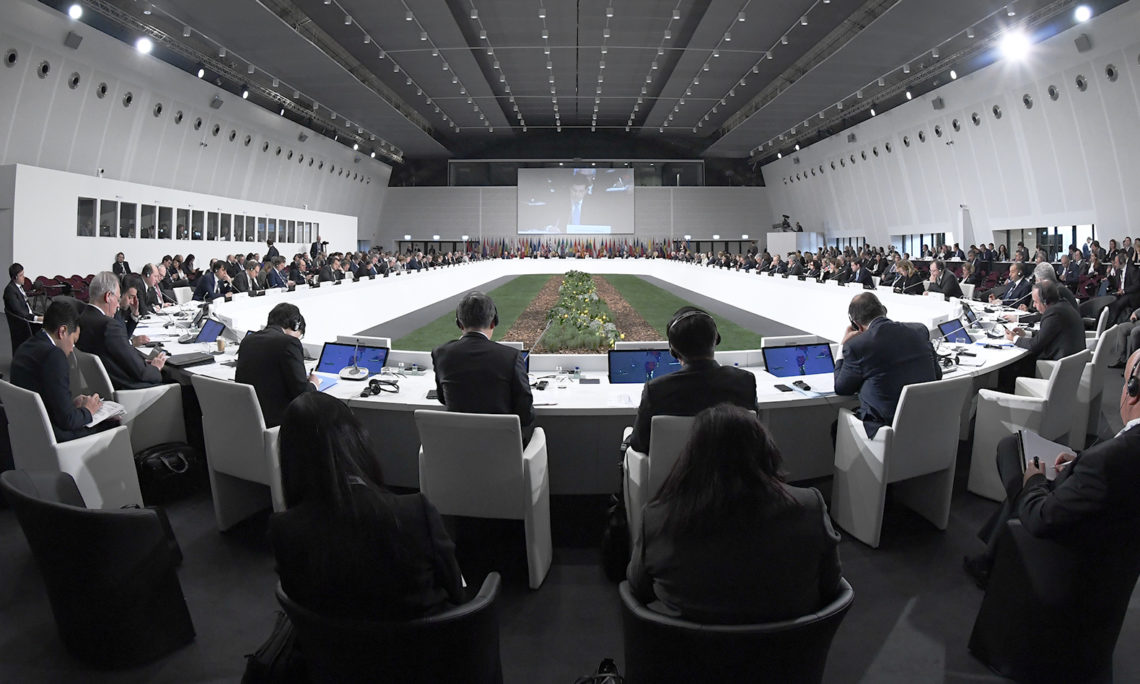 Remarks at the First Plenary Session

As delivered by Assistant Secretary of State A. Wess Mitchell
At the 2018 meeting of the OSCE Ministerial Council
Milan, Italy, December 6, 2018

Thank you, Minister Moavero, for hosting us this week.

Secretary Pompeo regrets that he could not be here today. He returned to Washington to pay his respects to President George H.W. Bush. During his presidency, President Bush strongly supported the OSCE. In 1990, he joined in signing the Charter of Paris for a New Europe and the Treaty on Conventional Armed Forces in Europe.

President Bush’s words at the 1992 Helsinki Summit are worth recalling today. He said, “Our world has changed beyond recognition, but our principles have not changed …. With our principles as a compass, we must work … to channel change toward the peaceful order that this century has thus far failed to deliver.”

Twenty-six years later, the OSCE remains a crucial element of European security. The United States helped build this architecture, we are the largest financial contributor to the OSCE, and we are committed to strengthening it.

The Helsinki Final Act speaks of sovereign equality, the inviolability of national borders, the territorial integrity of states, and respect for human rights and fundamental freedoms. These are non-negotiable pillars of the Act. The disregard that Russia has shown for these principles – through both repression at home and aggression abroad – should concern us all. The United States stands with courageous civil society members in Russia, who face intimidation and violence.

Russia’s ongoing aggression against Ukraine demonstrates the need for us to redouble our OSCE efforts. As we have said on many prior occasions, the United States denounces Russia’s lawless actions in Ukraine. They are flagrant acts of belligerence.

We witnessed an escalation on November 25th, when Russian vessels rammed and fired on Ukrainian ships. This was the continuation of a pattern. Russia’s repeated aggression contravenes all ten foundational principles of the Helsinki Final Act – a document to which Russia itself is committed.

The consequences are not hard to see. Russia’s destabilizing actions have prompted NATO Allies to enhance their deterrence and defense posture.

In the past four years, Russia has precipitated Europe’s largest humanitarian crisis in a generation – one that has cost more than 10,000 casualties in eastern Ukraine, and displaced more than 1.5 million people from their homes. Ukrainians have been imprisoned, tortured, and killed. Crimean Tatars and others who resist Russian rule are arbitrarily prosecuted. The OSCE should not mince words when assigning responsibility for these acts.

As Secretary Pompeo made clear last summer in the Crimea Declaration, the United States will continue to impose consequences on Russia until Moscow fully implements the Minsk agreements and returns control of Crimea to Ukraine.

We call on Russia to end its aggression in Ukraine, to release the detained sailors and their vessels, to return control of Crimea to Ukraine, and to stop harassment of unarmed, OSCE civilian monitors.

Nearly 70 of those monitors, I should add, are American citizens. The United States is the single largest contributor to the Special Monitoring Mission in Ukraine, which acts as our eyes and ears in the conflict zone.

It’s not only recent events in Ukraine that show Russia’s disregard for OSCE commitments. There are also Georgia and Moldova.

Russia’s continued occupation of Georgian territory and failure to fulfill commitments to withdraw forces from both places have prolonged these conflicts and deepened regional divisions.

Meanwhile, in the South Caucasus, we should continue to work toward a peaceful resolution of the Nagorno-Karabakh conflict.

The failure to uphold basic principles and commitments has damaged trust among OSCE states. Russia must honor its existing commitments.

Today we had hoped to welcome agreement on some initial steps to update the OSCE Vienna Document to help mitigate concerns regarding large-scale military exercises occurring ever more frequently on the continent. A large majority of the states around this table supported that effort, but Russia made it clear it did not see a need for military transparency. I call on Russia and all participating States to work together to change that dynamic. We should intensify our efforts next year with the goal of issuing an updated Vienna Document at the end of 2019.

The United States, for our part, will continue to support the OSCE and its comprehensive approach to security.