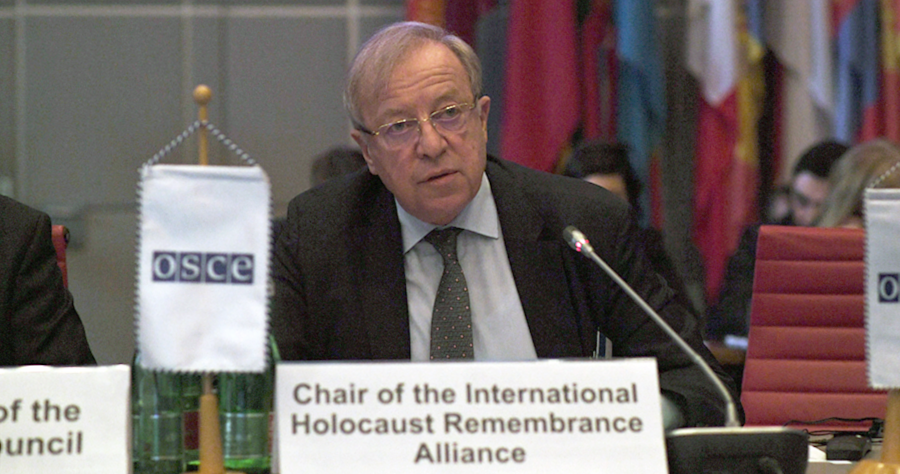 As delivered by Ambassador James S. Gilmore
to the Permanent Council, Vienna
January 30, 2020

Thank you, Mr. Chair, and thank you, Ambassador Santer, for your leadership as Chair of the International Holocaust Remembrance Alliance and for traveling to Vienna to deliver your address in person. It shows the importance Luxembourg attaches to this issue.

Today we solemnly recall the horrific persecution and systematic murder of six million Jews during the Holocaust. We also remember the millions of Slavs, Roma, Jehovah’s Witnesses, LGBTI persons, persons with disabilities, priests, and political activists who the Nazis and their collaborators enslaved and murdered during their vicious and barbarous rule and in their death camps.

The United States honors the sacrifices made by the Alliance of nations that fought Nazism and fascism. The United States remembers our own armed forces, many of whom gave the ultimate sacrifice, and we pay tribute to the Allied forces alongside whom they fought and died.

Earlier this week, on International Holocaust Remembrance Day, President Trump stated, and I quote the President, “we remember the millions of precious souls who perished as a result of the horrific crimes perpetrated by the Nazi regime. We also reaffirm our steadfast commitment to confronting the vile poison of anti-Semitism wherever and whenever it arises.

We ask that the world reflect on this day and seek to ensure that we stand united against intolerance and oppression of people of every race, religion, or ethnicity.”

None of the victims or survivors of Nazi evil should be reduced to a statistic. Each of the millions of people murdered had a story, a family, a life. And so did the millions more who were affected by the Holocaust but somehow survived its horrors.

I’d like to take a moment to mention a few of its victims by name. Your attention, please to the screens.

Josef Mueller was born in Germany in 1932. He was a member of the Roma community. In 1944, Josef was taken from his classroom by two strangers and told he was to receive an “appendectomy.” In reality, he was sterilized. Although Josef was scheduled to be sent to the Bergen-Belsen concentration camp, he was rescued by his foster father and kept hidden in a garden shed for five months until the war ended.

Mario Finzi was born in 1913 in Italy, the only child of a Jewish couple. Mario trained and practiced as a lawyer but was forced to stop in 1938 due to “racial” laws passed by Mussolini’s government. Mario was deported to Auschwitz in 1944, where, at the age of 31 he committed suicide by throwing himself on a high-voltage fence. He left a message behind for his parents, asking their forgiveness.

Henny Schermann was born in Germany in 1929, the first of three children in a Jewish family. In 1940, Henny was arrested and sent to the Ravensbruck concentration camp, both because of her Jewish heritage and, according to her arrest records, because she “visited lesbian bars.” Henny was gassed to death in 1942.

Johann Stossier was born in Carinthia, Austria in 1909. His family were farmers, and he enjoyed acting in a local theater group. In the 1920s he became a Jehovah’s Witness and began to do missionary work. As a Witness, Johann refused to give the Hitler salute, to swear an oath of loyalty to Hitler, or to enlist in the army. He was arrested in 1940 and eventually sent to the Sachsenhausen concentration camp. Johann was executed in May 1944 at the age of 34.

We bring these slides and these photos to you to remind you that these are just a few of the millions of stories of individuals whose lives were torn apart by the evils of hate and prejudice. I shared these stories, not only because each victim deserves to be remembered as an individual human being, rather than a statistic, but also to remind all in this room today of the true significance of Holocaust remembrance.

Anti-Semitism is on the rise around the world, including in many OSCE countries—a fact none of us can deny. My country, the United States, is not immune from anti-Semitism and is devastated by any violence directed against our Jewish fellow citizens, as are you. As these manifestations of hate persist and grow across our region, it is incumbent upon all of us, the participating States of the OSCE, to respond with decisive action.

The United States expresses its appreciation to the Albanian Chairmanship for hosting a “Conference on Combating Anti-Semitism in the OSCE Region” next week in Tirana. I will be there myself. We applaud your emphasis on drawing upon the talents of civil society to combat anti-Semitism.

The International Holocaust Remembrance Alliance (IHRA) is also, of course, in the forefront on this issue. Just last month, 34 of its member states, along with new liaison member North Macedonia, adopted the 2020 Brussels Declaration.

That declaration not only reaffirmed the commitments undertaken twenty years ago when the Alliance was formed in Stockholm, it also commits to further efforts to fight anti-Semitism and Holocaust denial and to promote historically accurate education, remembrance, and research on the Holocaust and the genocide of the Roma.

We once again call upon those participating States who have not yet done so to use the IHRA working definition of anti-Semitism as an indispensable tool in rooting out hatred in our societies, and we commend ODIHR for putting the definition into practice.

ODIHR’s Turning Words into Action to Address Anti-Semitism was a successful program which provided tools to continue this important fight. This program—specifically designed to combat anti-Semitism—has served as a model for ODIHR to expand its work to address different forms of intolerance. The United States supports this new effort, but believes it is important to maintain a particular focus on combatting anti-Semitism in OSCE programs.

The United States condemns all forms of hatred and urges others to call out and combat it in all its forms in the OSCE region. We reject anti-Semitism in both word and deed, and, as ODIHR Director Gisladottir said in ODIHR’s statement commemorating this day, “by building more tolerant and inclusive societies, we help to ensure the horrors of the past never return, and at the same time give the younger generation hope for a future without hate.”