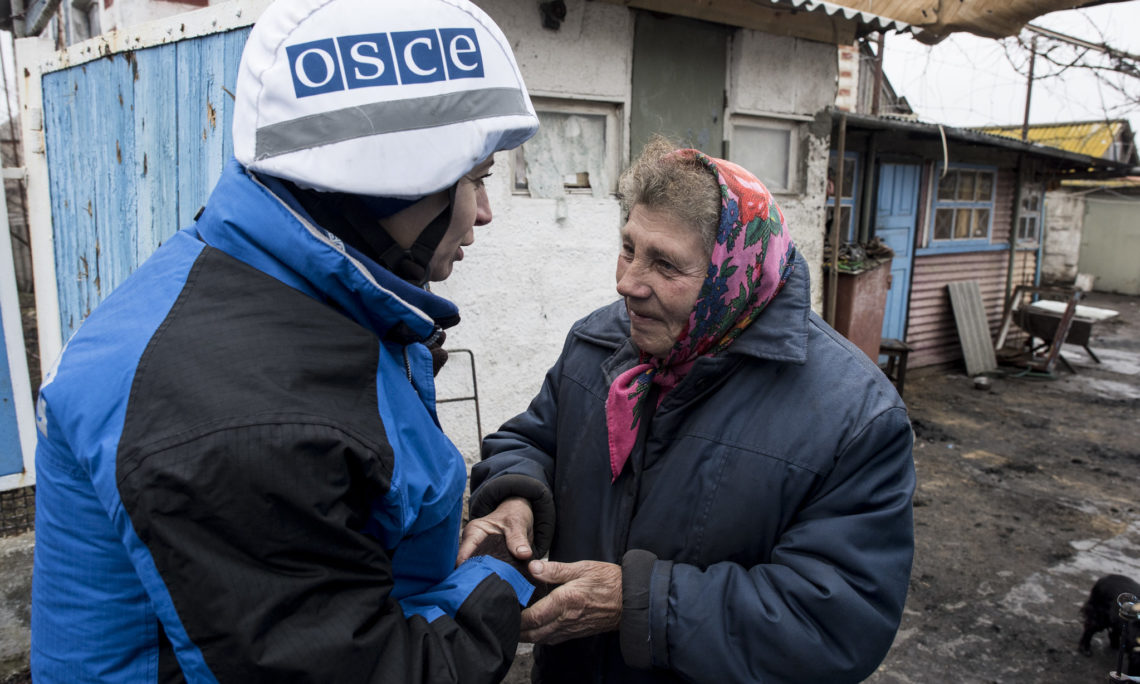 Response to the OSCE’s Chief Monitor in Ukraine, Ambassador Ertuğrul Apakan, and Mr. Rémi Duflot, Deputy Head of the Office of the CiO’s Special Representative

Ambassador Apakan and Mr. Duflot, we are pleased to welcome you to the Permanent Council.

Ambassador Apakan, it is particularly enjoyable to see so many members of your leadership team here present today. We welcome them. It is a strong testament to the commitment that you stand for a diverse, highly qualified, and skilled team. Congratulations, and we look forward to working with all of them.

Mr. Chair, we commend Ambassador Sajdik’s continued focus on the humanitarian aspects of this five-year conflict and the Trilateral Contact Group’s (TCG) work to mitigate the impact of ongoing Russian aggression on the local populations of eastern Ukraine. Despite the best efforts of the TCG, including the March renewal of the ceasefire commitment, residents suffer the consequences of gunfire and shelling almost daily. We take note of the March 28 press release highlighting the importance of achieving peace in eastern Ukraine, and we welcome Ambassador Sajdik’s commitment to realizing that goal.

We welcomed news that 60 prisoners serving time for crimes committed before hostilities began were transferred from Russia-controlled Luhansk into government-held areas where their families can visit them. However, it is a painful reminder that due to Russian intransigence, there have been no exchanges of Donbas detainees since December 2017. Russia refuses to discuss these detainees, Ukrainian political prisoners, and the 24 crewmembers it captured in the Black Sea in November 2018. We reiterate our call for Russia to authorize the exchange of all remaining detainees. Mr. Chair, the United States also welcomes Ukraine’s March 22 pledge to open the Zolote crossing point and take steps to reconstruct the Stanytsia Luhanska Bridge. We hope that Russia and its proxies in eastern Ukraine will respond to Ukraine’s gesture to improve conditions at crossing points after years of discussions. A display of willingness from Moscow to improve living conditions in the areas under its control is long overdue.

The United States shares Ambassador Sajdik’s view that the Minsk agreements in their entirety are the best way to achieve a peaceful resolution to the conflict instigated by Russia in the Donbas. We call upon Russia to follow through on the commitments it made in Minsk in 2014 and in 2015, and to disengage and withdraw all of its forces from Ukraine. Progress on resolving this conflict can begin only after the fighting stops.

Ambassador Apakan, we welcome the renewal of the SMM mandate, and the approval of its budget, allowing your monitors to continue their valuable work.

Continued fighting means mounting casualties. We know from SMM reporting that over the past three months there were almost 1,000 instances of the use of weapons that should have been withdrawn pursuant to the Minsk agreements, including artillery, mortars, tanks, and multiple launch rocket systems. We are concerned about the presence of military and military-systems hardware stationed in and near residential areas, as these emplacements draw return fire that puts civilians at risk.

SMM UAVs were subjected on multiple occasions to gunfire and signal interference, and a long-range UAV was brought down over Russia-controlled areas after its GPS was jammed. UAVs play a critical role in documenting the extent of Russia’s support for and involvement in the conflict, particularly in the border areas. Ambassador Apakan, we encourage you to continue to use these valuable assets to provide the most accurate picture of the conflict on the ground. The UAVs – particularly at night – expose clandestine cross-border convoys crossing in areas where Russia-led forces prohibit or restrict vehicle patrols. And we reiterate our call on Russia to cease its campaign of restricting SMM patrols and obstructing SMM UAV operations.

The United States recognizes and values the SMM’s reporting on the social and economic impacts of Russia’s campaign to destabilize the Sea of Azov, the Kerch Strait, and the broader Black Sea region. We would welcome a thematic report on these issues and encourage the Mission to continue this valuable work.

Mr. Chair, the United States remains concerned over the worsening abuses in Russia-occupied Crimea. On nearly a daily basis, Russia harasses, intimidates, and arrests members of the Crimean Tatar community. We reiterate our concern about the arbitrary arrests of Crimean Tatars on March 27 and 28, most of whom were activists with the human rights movement Crimean Solidarity. We are troubled by news that all of these men have already been transferred to Russia, in violation of Russia’s obligations. All of these men should be immediately released and returned to Crimea.

We are also troubled by reports of serious medical neglect by prison authorities of unjustly imprisoned Ukrainians. Euromaidan activist Andrii Kolomiets is serving a 10-year sentence in a Russian prison on absurd charges of attacking Ukrainian riot police in Kyiv, despite the insistence of Ukrainian authorities that he did no such thing. He was hospitalized this week for complications related to untreated injuries he alleges were committed during torture by Russian police in 2015. Disabled and elderly Crimean Tatar Activist Edem Bekirov is suffering multiple serious health problems after being denied proper treatment for diabetes since being detained in late 2018 on “terrorism charges” that human rights groups call baseless. We call on Russia to release both men, together with all of the Ukrainians it has wrongfully imprisoned.