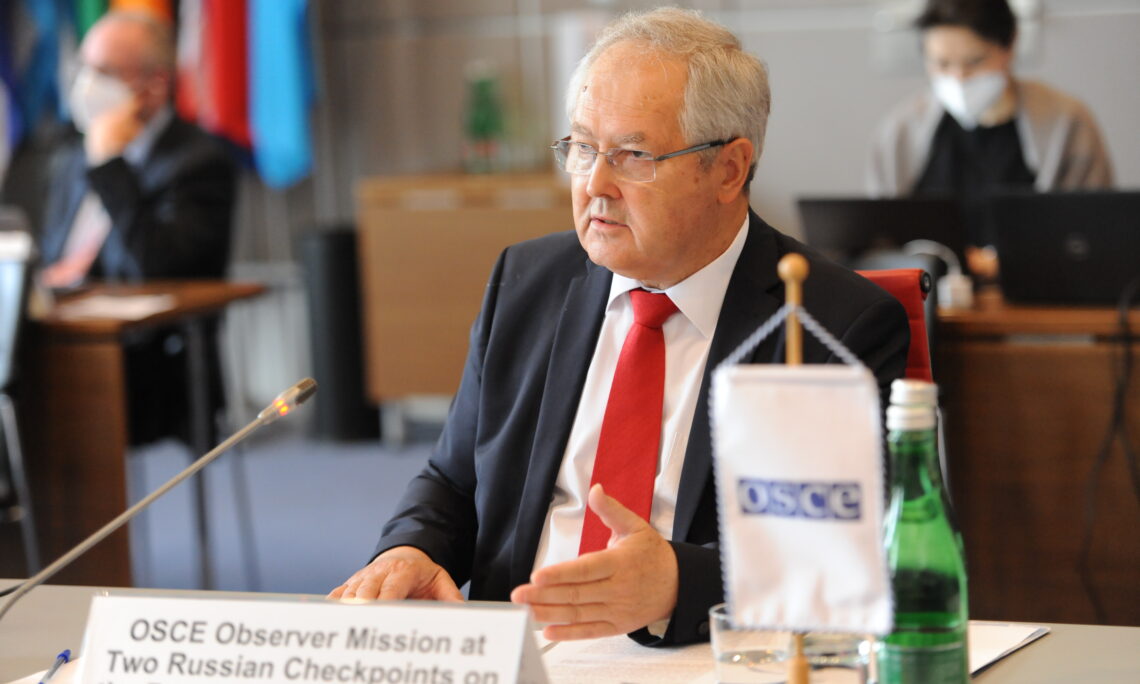 Ambassador Varga, welcome back to the Permanent Council.  As always, we are grateful for you and your team’s efforts.  You continue to perform your already challenging duties under exceptionally difficult conditions – and I am relieved to see that you seem to have made a full recovery from COVID, I hope that is the case.  I would also like to express the United States’ great appreciation to all of the monitors for their work under challenging circumstances.

We were especially relieved to read that your team continues to maintain an uninterrupted presence at the two Border Crossing Points, despite the hardships added by the pandemic.

Since 2014, as your report notes, the Mission observed the movement of more than 24 million persons, including more than 39,000 people in military-style outfits, and more than 290,000 vehicles.  The staggering numbers you have recorded over the last seven years, however, account for just a small fraction of traffic crossing the Russia-Ukraine border.

We regret that Russia has severely limited the geographic scope of your Mission, enabling your team to monitor only two of the 11 Border Crossing Points along the nearly 400-kilometer-long border.  In addition, Russia restricts the Observer Mission to specifically designated areas, limits the Mission’s movement within those areas, and prohibits its use of binoculars or cameras.  In short, your observers are boxed in and blinkered.

Nevertheless, working from your distant positions with limited view, the Mission has observed since its inception the movement of more than 100 Russian convoys.   In the period covered by this report alone it observed the movement of more than 760 thousand people.  The Mission continues to observe the crossing of individuals in military-style outfits, many of them wearing badges bearing emblems of Russia-led forces in eastern Ukraine.  Your team has also observed more than 4,000 buses; 8,000 trucks; 1,500 minivans; and nearly 500 fuel trucks in the period covered by this report.  These numbers represent just a fraction of what is crossing the uncontrolled border between Russia and Ukraine.

While movement across the Russia-Ukraine border remains largely unchecked, Russia and its proxies restrict civilian movement across the Line of Contact and between Russia-controlled and Ukrainian government-controlled territory in Luhansk and Donetsk oblasts.  Russia has no problem supplying its proxies with weapons to continue its aggression against its sovereign neighbor. However, Russia does its utmost to prevent elderly and disabled civilians from retrieving their pension checks, receiving medical care, and contacting their families.

We remain cognizant of the administrative issues you also face in Russia, including the lack of legal status and privileges and immunities.  These burdens add unnecessary stress as you carry out an already difficult tasking.  The United States continues to support extending the mandate of the Border Observer mission to six months.  As we have stated before, such an extension should not preclude you from briefing the Permanent Council three times a year.

The United States joins other participating States in calling for Russia to allow for the geographic expansion of this Mission.  We further call on Russia to afford the Observer Mission the ability to travel along the border so it can effectively report on the situation.  The Mission should be able to observe every Border Crossing Point along the Russia-Ukraine border.

Ambassador Varga, you continue to have the fullest support of the United States and our appreciation for the Mission’s work, particularly during this most difficult period.