Home Home | News & Events | Response to Condolences for Orlando: Statement to the PC 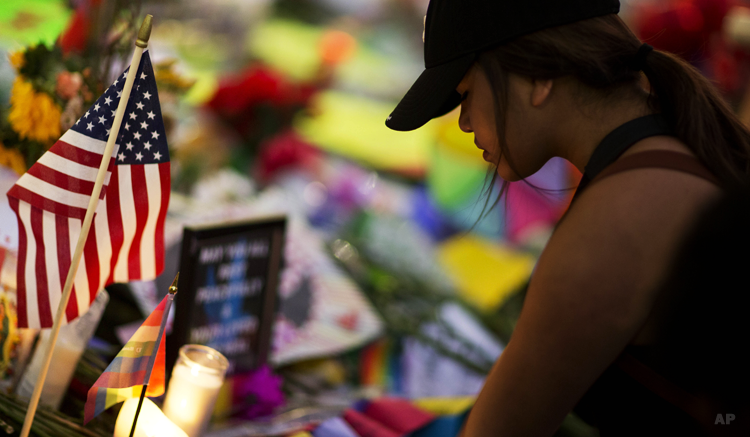 A mourner visits a makeshift memorial for the victims of the mass shooting at the Pulse Orlando nightclub Tuesday, June 14, 2016, in Orlando, Fla. (AP)

Colleagues, I haven’t prepared a script for today. I have one thing to read at the end, but the words aren’t mine. But I jotted a few notes to say ‘thank you’.

And first I’d just like to thank all of you for the statements today, as well as the calls, the texts, the emails, the letters that you’ve sent to our delegation in recent days. We feel your kindness and your sympathy, and it lifts us up.

The second point I wanted to make is that the investigation into the attack in Orlando is ongoing and obviously we’ll learn more in the coming days and weeks. President Obama has said that this is being investigated as an act of terrorism, and I think, whatever the ultimate findings of this investigation, more broadly, each attack – and here I join others in expressing my sympathy to France and to the French government and French people for the attack on the two police officers in Paris – each attack underscores the importance of our collective efforts to counter violent extremism and radicalization that leads to terrorism. The President was clear in his address this week that our mission is to destroy ISIL, and that is a goal shared by all around this table.

The third point I wanted to make is that President Obama has called this an act of terror but, of course, as many have said today, it was also an act of hate. And I want to thank again those of you who have reached out to me particularly to say that you understood that this resonates personally for many LGBT people. Brian and I were discussing how, for many of us, an attack like this represents our parents’, our siblings’, our loved ones’ worst fears: that we might be targeted for violence as individuals for who we are.

I think it’s also important – it’s not just that LGBT people were targeted, but they were targeted at a gay bar. And I never thought I was going to talk about gay bars in the OSCE Permanent Council, but in so many places gay bars have been a place of safety for people who were rejected outside in society. A place where people could go to be free, to laugh, to joke around, to sing, to dance, to goof off – sorry translators, I don’t know how to translate ‘goof off’ – and this was an attack on that place of safety.

We note the UN Security Council statement condemning the violent attack on people because of their sexual orientation, and I thank the delegations represented around this table whose colleagues worked in New York to make that possible.

The fourth point I wanted to make is that while LGBT people may have been the primary victims, they weren’t the only targets. And one of the beautiful parts of the last week has been to see how the response–how immediately, how automatically, how almost without thinking and overwhelmingly–the chorus of grief and sympathy and outrage and anger and incomprehension has recognized from the outset that this wasn’t only an attack on LGBT people, this was an attack on all of us. On all Americans, on the idea of America, indeed, on the values, as some have said here today, that underpin democratic societies. And I think it is remarkable and worth celebrating that when 49 young people who were mostly LGBT people of color were killed, people around the world recognized in their innocence and their dignity the common dignity that unites us all.

The fifth point I wanted to make is that we need to make sure that, as we go forward, we don’t give in to the temptation to betray our values. President Obama said this week: “Our diversity and our respect for one another, our drawing on the talents of everybody in this country, our making sure that we are treating everybody fairly – that we’re not judging people on the basis of what faith they are or what race they are, or what ethnicity they are, or what their sexual orientation is – that’s what makes this country great. That’s the spirit we see in Orlando.”

And I think, as we move forward in whatever small way can here, and as we move forward as societies, the best way to honor the innocence of the victims is through our own dedicated toil to build societies that reject intolerance and reject terror, that respect and protect human dignity and human rights.

I wanted to finish by reading – anybody who has been following popular culture in America knows that the hit musical of the last year on Broadway is a musical called ‘Hamilton’, which has broken all kinds of new boundaries and is a musical that is fittingly about our Founding Fathers, and that challenges audiences to think about both American values and the challenges of race and building a society that reflects American values more broadly. And this Sunday was the annual Tony Awards, where this show Hamilton ran away with most of the prizes. And in delivering his acceptance speech, the creator of Hamilton, Lin-Manuel Miranda, first thanked his wife and his daughter, and then delivered a sonnet, and I’d like to share it with you.

We chase the melodies that seem to find us
Until they’re finished songs and start to play
When senseless acts of tragedy remind us
That nothing here is promised, not one day
This show is proof that history remembers
We live through times when hate and fear seem stronger
We rise and fall and light from dying embers
Remembrances that hope and love lasts longer
And love is love is love is love is love is love is love
Cannot be killed or swept aside
As sacred as a symphony, Eliza tells her story
Now fill the world with music, love, and pride.