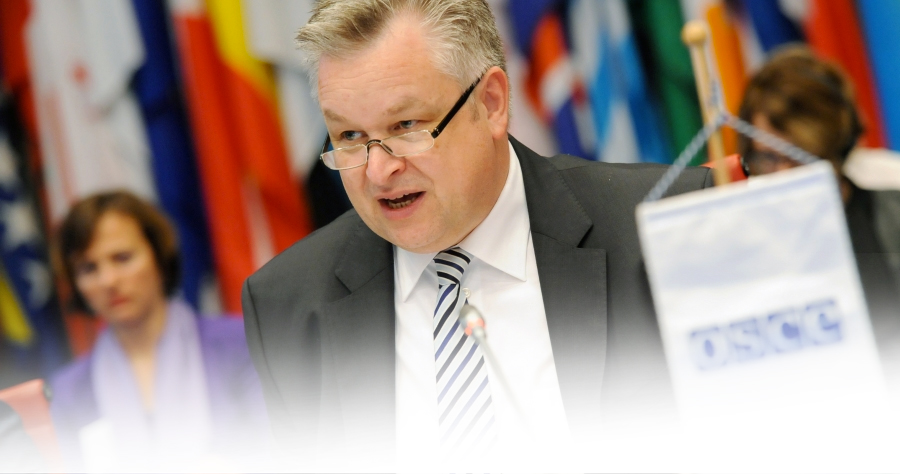 Response to the Director of the OSCE Office for Democratic Institutions and Human Rights, Michael Link

Director Link, the United States welcomes you back to the Permanent Council and thanks you for your report on ODIHR’s activities, as well as your reflections on the general political climate in the OSCE region. As this is your final formal report before the Permanent Council in your current capacity, Director Link, on behalf of the United States, I would like to thank you for your outstanding leadership of ODIHR during exceedingly difficult times. Your personal and public engagement on specific issues of concern, including your close cooperation and joint statements with other OSCE institutions, particularly the Representative on Freedom of the Media and the High Commissioner on National Minorities, has set a high bar for your successor. Your advocacy for ODIHR’s mandate and budget, and your defense of ODIHR’s independence, has also set a solid example for future directors to follow.

Director Link, the depth to which ODIHR is able to engage on a broad set of issues with such a small staff and a modest budget is impressive. You and your hard-working team deserve our gratitude for activities that range from monitoring of elections processes; promoting the human rights of persons with disabilities and advocating for their inclusion in public and political life; assisting human rights defenders; combating torture; and working with states to help them meet their commitments to respect freedom of peaceful assembly. The list could go on.

ODIHR is leading the way on numerous areas of critical importance to the comprehensive and lasting security of our region. ODIHR’s work on tolerance and non-discrimination, in particular regarding combating violent hate crimes, anti-Semitism, and intolerance towards Roma and Sinti, is essential at a time when intolerance is on the rise throughout the region. We support ODIHR’s work on combating trafficking in persons, and look forward to proactive and robust activities and projects to address the issue.

ODIHR’s institutional independence and comprehensive assessment methodology constitute the gold standard for objective and impartial election observation. Director Link, thank you for your active engagement with state election officials during the run up to the U.S. general elections last year. As a result of your important outreach efforts, the OSCE election observation went smoothly, and a total of 295 observers from 44 countries were deployed on Election Day. We applaud ODIHR’s recent observation and assessment missions in Bulgaria, Armenia, and Serbia, and welcome its planned observation of Turkey’s April 16 constitutional referendum. We likewise congratulate you, Director Link, on improved cooperation between ODIHR and the OSCE Parliamentary Assembly in election observation and in other areas.

Director Link, dear colleagues, on the topic of the Human Dimension Implementation Meeting and other human dimension events, the United States’ position regarding the role and work of civil society is as emphatic as it is clear: we will not permit any weakening of existing commitments, procedures, and precedents. Civil society is under siege in a number of participating States and needs our principled support now more than ever. The OSCE must not be seen as restricting engagement with civil society, whether at meetings or with our field missions, while some governments intensify their efforts to shrink the political space for civil society activism and to silence independent voices. The participation at HDIM of independent civil society members is essential to the quality and integrity of our discussions, which as you noted should be open and transparent. Their contributions provide ground-truth, deepen our understanding of serious issues confronting the OSCE region, and help us find practical solutions. According to the OSCE’s well-known modalities for civil society participation in HDIM, the only reason for an individual or group to be denied registration is if they “resort to the use of violence or publicly condone terrorism or the use of violence.” Such accusations cannot be based on unilateral political assertions. As has always been the case, the United States supports a safe, secure, and respectful HDIM, but we resolutely reject undue limitations on civil society participation at Europe’s largest annual human rights conference.

Also essential to the quality and integrity of our human dimension events is the timely approval of dates and topics that require consensus. We call upon all delegations to promptly agree to the Chairmanship’s proposals for HDIM’s specially selected topics and the Human Dimension Seminar, and to reject efforts by one delegation to “package” these with the Chairmanship’s other human dimension events.

Director Link, we have heard your calls for ODIHR to be properly resourced so that it can assist all participating States with the implementation of their OSCE commitments and carry out vital work on democratization, human rights, tolerance and non-discrimination, and Roma and Sinti issues. The United States is proud to have provided over $2.5 million dollars for extra-budgetary projects during your tenure as director. We encourage all participating States to support ODIHR extra-budgetary projects.

Director Link, you can rest assured that the United States will continue to oppose any weakening of ODIHR, of its institutional independence, of the integrity of its mandate, or of its budget. We will work with other participating States and with the Austrian Chairmanship to ensure that a fearless, determined, effective leader is chosen as your successor.

In closing, let me once again thank you, Director Link, for your principled leadership at this challenging time for Europe and Eurasia, and for your defense and promotion of the principles that are at the very core of the OSCE’s comprehensive concept of security. Your energetic leadership has helped ensure that in an increasingly difficult environment, ODIHR and its expert staff have performed with great effectiveness as the OSCE’s key institution for assisting participating States in meeting their human dimension commitments. Your contribution of dedicated and distinguished service has strengthened ODIHR and has advanced the cause of human rights, human dignity, and democratic government.