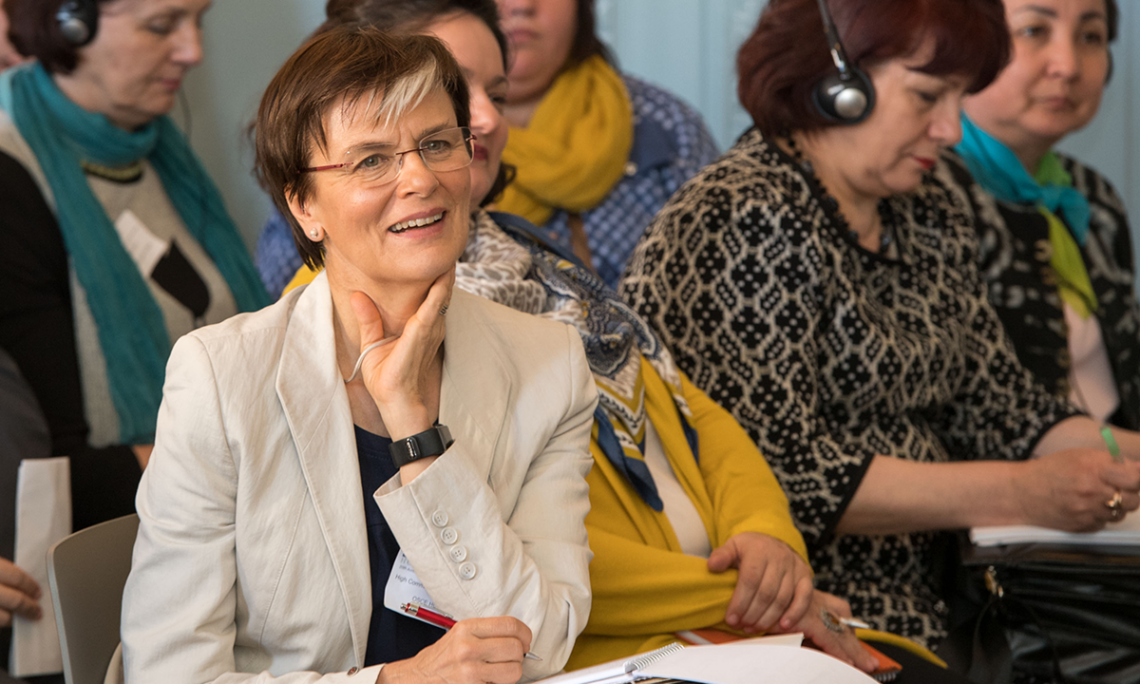 High Commissioner Thors, the United States welcomes you back to the Permanent Council after an especially busy and productive period.  Your report today and the country visits you have made in the past six months demonstrate a commitment to carry out your work wherever needed. The United States very much values your engagement throughout the OSCE region as we continue to grapple with issues regarding ethnicity, language, and education while ensuring the free exercise of human rights and fundamental freedoms. We appreciated your visit to the United States in April, and look forward to continuing our productive engagement, including work on access to justice guidelines. Also, we agree that your successful event in The Hague in April to mark the 20th anniversary of The Hague Recommendations Regarding the Education Rights of National Minorities was a constructive opportunity to revisit these important recommendations, and to examine contemporary challenges in addressing diversity in and through education.

High Commissioner Thors, we note with concern your conclusion that hate speech targeting national minorities is on the rise in many of the countries you visited. We appreciate your focus on the worrisome trend of increasing intolerance and hate speech, and appreciate your intention to closely coordinate your activities in this regard with the Office for Democratic Institutions and Human Rights, the Representative on Freedom of the Media, and other relevant OSCE institutions. We agree that “preventing hate speech is conflict prevention,” and that political leaders must publicly denounce manifestations of intolerance and discrimination unequivocally, and in a timely manner. The United States believes that all of this work, including updating the Guidelines on the Use of Minority Languages in the Broadcast Media, must be done in a way that reinforces respect for our commitments in the areas of freedom of expression and freedom of the media.

We welcome the information you shared regarding your recent country visits to Kyrgyzstan, Ukraine, Georgia, Bosnia and Herzegovina, Croatia, Hungary, Slovakia, Moldova, and Serbia. Regarding Ukraine, it is deplorable that the de-facto authorities continue their campaign of violence against members of national minorities in Russia-occupied Crimea, including killings, disappearances, imprisonment, and torture. Communities whose members have been targeted for discrimination in Crimea include ethnic Ukrainians, Orthodox Christians affiliated with the Kyiv Patriarchate, other religious minorities, and, in particular, members of the Crimean Tatar community. As you highlight in your report, Russia has banned the Crimean Tatar Mejlis – the sole independent, legally-recognized voice of the Tatar people. It has shut down Tatar language media outlets and cut off Tatar-language schools. Occupation “authorities” have barred Crimean Tatars from gathering publicly in remembrance of the mass deportation carried out in the Soviet era. Russia must end its repression of Crimean Tatars, other members of national minorities, and all who have suffered during its occupation by upholding international law. We renew our call for Russia to end its occupation of Crimea immediately. The United States’ Crimea-related sanctions will remain in force until Russia returns control of the peninsula to Ukraine.

High Commissioner Thors, while Russia continues to deny you access to the part of Ukraine it occupies, we are encouraged by your repeat visits to other parts of Ukraine where you have engaged productively with the government and other institutions, including the Verkhovna Rada Committee on Human Rights, National Minorities and Inter-ethnic Relations. You reiterated your recommendation that the Ukrainian government should, in consultation with representatives of minority communities, including Roma and Sinti, establish a designated executive body that would function as a central interlocutor for minorities. We agree that Ukraine, like many other countries, needs stronger institutional structures to fulfill its commitments regarding persons belonging to national minorities, and to promote more effectively the inclusion in society of all parts of its diverse population.

In Central Asia, we very much appreciate the work you have done in Kyrgyzstan, and commend the government of Kyrgyzstan for its openness to engage with you and your staff on complex issues. We share your concern, however, about persistent roadblocks to the full political and electoral participation of ethnic Uzbeks living in Kyrgyzstan who are under-represented in the Kyrgyz parliament, and face linguistic discrimination in the education system. We also are concerned about continued problems regarding access to justice for these Uzbeks, and we urge you to continue to place a priority on this issue. We applaud your continued efforts on the regional Central Asia Education Program, which we believe will yield productive results for years to come.

High Commissioner Thors, you have demonstrated that successes are possible on complicated minority issues in Moldova, in Gagauzia in particular. The Moldovan parliament’s November 2015 decision to establish a permanent joint working group composed of members of parliament and the People’s Assembly of Gagauzia was a positive step. We also join you in commending the government of Georgia on its recent efforts to implement the State Strategy for Civic Equality and Integration for 2015-2020 and its Action Plan, and reiterate your call for the full implementation of the State Language Law. We also note the good cooperation you experienced with the governments of Serbia, Bosnia and Herzegovina, Croatia, Hungary, and Slovakia, as well as the numerous recommendations you gave to those countries. These engagements prove that transparency and political will are powerful tools in addressing even the most difficult issues.

In conclusion, I want to be very clear that the United States values highly the work of the High Commissioner on National Minorities. We steadfastly support the High Commissioner’s independence, mandate, and role in conflict prevention, including providing early warning and early action in regard to tensions involving national minority issues. The High Commissioner is a key OSCE institution that advances the goal of enhancing peace and security throughout the OSCE region, and contributes to respect for the human rights of members of national minorities. High Commission Thors, the United States appreciates your principled work across the OSCE region. As we have said many times recently in other venues, we support your extension for another three-year term until August 2019.