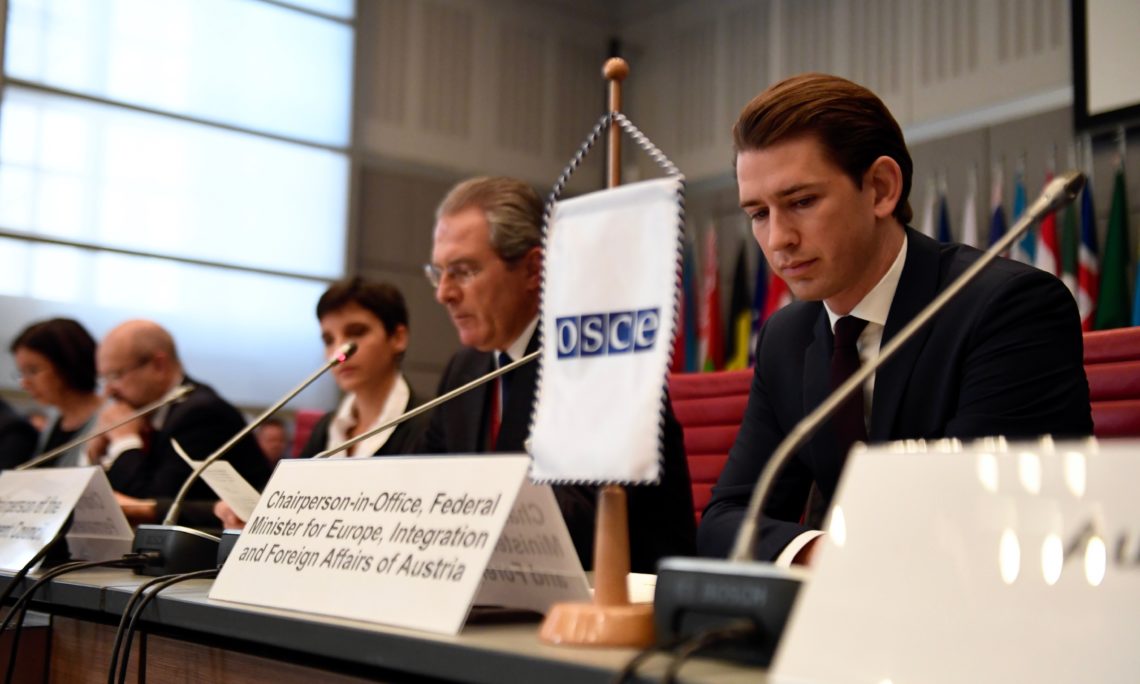 U.S. Mission to the OSCE

Minister Kurz, we are pleased to welcome you to the Permanent Council as Chairperson-in-Office, and we associate ourselves with the condolences offered by the Chairmanship at the beginning of this meeting.  We offer our sincere thanks to you, to Ambassador Koja, the entire Austrian delegation, and the Ministry of Foreign Affairs task force for assuming the Chairmanship of the OSCE in 2017.  Last year at this time, when Minister Steinmeier addressed the Permanent Council, we noted that Europe was facing the most significant security crisis since the end of the Cold War – a crisis which stemmed from aggressive acts by one participating State against another that contravene OSCE principles and commitments.

Unfortunately, Russia’s aggression in Ukraine continues.  Russia maintains its occupation and attempted annexation of Crimea and systematically violates the human rights of those who reside on this sovereign Ukrainian territory, viciously targeting Crimean Tatars, ethnic Ukrainians, and anyone who opposes Russia’s occupation.  Russia also continues to train, equip, and fight alongside so-called separatists in eastern Ukraine, putting civilians on both sides the line of contact at constant risk.

It was fitting that you began your tenure as Chairman-in-Office with a visit to Ukraine, where you affirmed Austria’s commitment to work toward a peaceful resolution of the conflict in eastern Ukraine.  We agree fully with your statement that “peace can only be achieved with Russia, and not against Russia.”  Unfortunately, Russia continues to deny that it is party to this conflict, even as OSCE monitors document the presence of Russian troops and equipment in separatist-controlled areas of Ukraine.

We look to the Austrian Chairmanship to continue support for the Trilateral Contact Group’s efforts to oversee the full implementation of the Minsk agreements, and to continue support for the Special Monitoring Mission’s efforts to provide transparency and accountability throughout eastern Ukraine.  The SMM requires full and unfettered access and guaranteed safety for monitors –   conditions that have been lacking, in large part because Russia fails to use its influence to achieve them.  Russia must also end its systematic campaign to blind OSCE monitors through threats, intimidation, and tampering with or destroying SMM equipment.  Minister Kurz, we hope you will continue efforts to expand the mandate of the Observer Mission on Ukraine’s internationally-recognized border with Russia to monitor the flow of Russian troops and equipment into Ukraine.

I was pleased to hear our Russian colleague this morning say that Russia advises all of us to “do no harm.”  And yet, after all the harm that Russia has done in Ukraine and elsewhere, it is difficult to take these words seriously.

In the face of the ongoing security crisis in Ukraine, and to help manage growing distrust and tensions, we appreciate the Chairmanship’s readiness to initiate a structured dialogue on current and future challenges and risks to security in the OSCE area.  The United States looks forward to working with the Chairmanship and others on establishing this process as soon as possible, which we believe could focus on, among other things, threat perceptions (including those related to current and protracted conflicts as well as transnational threats and challenges), developments in military doctrines, trends in force postures, military activities that have the potential to cause concern, and possible ways to improve confidence and reduce tensions.

We believe an inclusive dialogue, along with the arms control instruments in the OSCE toolbox, can contribute to increasing military transparency and rebuilding trust in Europe and Eurasia.  In that context, the United States remains firmly committed to the full implementation of existing obligations and commitments, especially the Treaty on Conventional Armed Forces in Europe, the Open Skies Treaty, and the Vienna Document.   In order to make the latter more responsive to the current security situation in Europe, we must continue to work on modernizing the Vienna Document.  We see such modernization as a clear step toward improving comprehensive, cooperative, and indivisible security in the OSCE area.

Mr. Minister, if I may, I’d like to quibble with your casting our present predicament as being one of being bloc-to-bloc.  I don’t think our present situation is one of two blocs, but rather of an overwhelming majority of states who work, or want to work, in good faith to build an effective international system, and an isolated few who seek to undermine it.  This isn’t better than bloc-to-bloc, but it is different.

The protracted conflicts in Nagorno-Karabakh, Moldova, and Georgia continue to undermine European security, requiring the OSCE’s unfailing attention.  As a co-chair country of the Minsk Group, and an active participant in both the 5+2 talks on the Transnistrian settlement process and Geneva International Discussions, the United States looks forward to working with you to seek resolutions to the protracted conflicts in the OSCE region.  We were disappointed that participating States were not able to reach a decision on improving the OSCE’s crisis response capability, and urge the Chairmanship to continue this important work.

As the New Year’s Eve attack in Istanbul again reminded us, the scourge of terrorism continues to demand our utmost vigilance.  As such, we fully support the Austrian Chairmanship’s intention to address violent extremism and radicalization that leads to terrorism, with a particular focus on the youth of the OSCE region.  We emphasize the key importance of information-sharing, especially in the areas of foreign terrorist fighters, stolen and lost travel documents, firearms, and looted or stolen cultural property.

All of the OSCE’s dimensions are important when combatting terrorism.  Democratic governance, respect for human rights and fundamental freedoms, tolerance, rule of law, combatting corruption, and economic prosperity contribute to our security and stability as much as our cooperative efforts in the realm of security to prevent terrorist attacks.

Minister Kurz, the United States welcomes Austria’s priorities in the OSCE’s economic and environmental dimension, including greening the economy and reducing environmental risks, improving energy security, promoting good governance, and fighting corruption.  We were pleased that a Ministerial Decision was adopted in Hamburg to strengthen good governance and promote connectivity.  The discussions that led up to adoption of this decision highlighted the importance of the issue of human trafficking and labor exploitation in global supply chains, which Austria helpfully committed to make a priority this year.  We look forward to working with the Austrian Chairmanship on all of these issues during 2017.

Migration and refugee issues will affect security throughout the OSCE region for the foreseeable future.  We should be prepared to continue addressing these issues through the OSCE in coordination with other international organizations, and in keeping with our international humanitarian obligations and commitments.  In Hamburg, all participating States recognized that the OSCE must address the challenges and causes of large movements of people, as well as the positive benefits and opportunities of safe, orderly and regular migration for inclusive growth and sustainable development.  We look forward to working with the Austrian Chairmanship and OSCE executive structures to implement our commitments in this area.

In Hamburg, Secretary Kerry warned that “bigotry, repression, and the silencing of dissent cannot become the new normal for any of us.  Every chip away at the fundamentals of freedom is actually an ugly building block in the road to tyranny.”  We should never overlook the importance of the link made by the Helsinki Final Act between respect for human rights and fundamental freedoms within states to lasting security among states.  We should all be concerned by threats to human rights and fundamental freedoms within our own countries, as well as those in other participating States.

The United States looks to Austria to maintain the German Chairmanship’s principled focus on supporting civil society and independent media, and promoting tolerance and non-discrimination throughout the OSCE region.  Our German colleagues stated that they believed Germany had a moral obligation to advance these principles through its OSCE Chairmanship.  We all have a moral obligation to advance these goals at a time when intolerance and hate crimes are on the rise in far too many of our countries, and when political rhetoric and policy proposals seek to accentuate differences between people rather than unite citizens.  Austria must make the full implementation of all human dimension commitments by all OSCE participating States a priority of its Chairmanship, and ensure the Organization has the political and financial support to assist participating States in this regard.

Among the most critical tasks imminently facing the Austrian Chairmanship, as you highlighted, is to reach agreement on all field mission mandates.  Our field missions are responsible for the most important day-to-day work of this organization, and we support your focus on resolving any remaining issues as soon as possible, so that these vital efforts can continue.  It is also essential to conclude a 2017 Budget, without which the OSCE will be unable to carry out its work.  Despite budget constraints and ongoing political challenges across the OSCE region, it is vital that the participating States provide the Organization with the resources it needs to function effectively.  The Austrian Chairmanship must also ensure that qualified candidates are selected through competitive processes to fill key roles within our Organization:  Secretary General, Representative on Freedom of the Media, High Commissioner on National Minorities, and Director of the Office for Democratic Institutions and Human Rights.  Getting the right people who can effectively carry out the mandates and tasks assigned to the offices, institutions, and field missions they oversee, while maintaining their independence, is essential.

Minister Kurz, we agree with you about the importance of opening up the OSCE to our stakeholders in civil society, the media, the private sector, and the citizens each of us represent.  We believe the OSCE Permanent Council should be live-streamed on the Internet, thereby enhancing transparency and allowing our citizens to hold us accountable for the statements made here.

In closing, let me say again, Minister Kurz, that the United States welcomes Austria’s becoming Chair of the OSCE at this challenging time for Europe and the OSCE region.  You, Ambassador Koja, and the Austrian delegation have our full support as we work together to strengthen this Organization, and in doing so strengthen comprehensive security in the OSCE region.